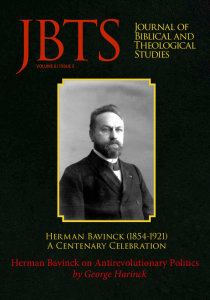 Though Herman Bavinck is well known as a theologian, he also played a substantial role in Dutch politics. He was a member of the Antirevolutionary Party, he served as manager and president of the Central Committee, the executive board of this party, and the last decade of his life he was a Senator, a member of the Dutch First Chamber or Senate. In his context, other theologians were also active in politics and served as representative in city councils, provincial or national polities bodies: Abraham Kuyper in the first place, but also his former fellow student in Leiden, professor Gerrit Wildeboer, his Kampen colleague Maarten Noordtzij, Rev. A. Syb Talma, and the Leiden professor Bernard D. Eerdmans, to name a few.

Bavinck played a larger political role than most of his contemporary theological colleagues. However, evaluating his activities in the political domain, obituaries and historical publications have not stressed his work as a politician, but only his reflections on politics. He was not called a politician, but a statesman, a role somewhat exalted above political wheeling and dealing. Bavinck himself distinguished between politics as an academic discipline, as an art, and as a praxis. The praxis is about the tact of a politician, to speak or to act in such a way that serves best the state’s interest. The art of politics is the application of political science to the given situations and relationships.[1] He was not a lawmaker, not a keen debater or agile in making deals, not much involved in closing ranks, organizing a majority, or canvassing voters, nor was he busy with negotiating in the corridors of parliament. His distinctive contribution was somewhere in between the art and the praxis of politics, offering broader perspectives on topical political issues, and he was much appreciated for his well formulated and thorough speeches. As such, he was really at home in the chambre de réflexion, as the Senate is called.

This assessment fits in the popular picture we have of Bavinck as a reflective theologian, more specialized in giving overviews and perspectives, and less attracted by the day-to-day struggle in church or in politics. This is not the full story, however. Bavinck was not an academic living in an ivory tower. His worldview would not allow this. He wrote about Calvin: he “in particular poured the luster of godly glory over the whole of earthly life, and he placed all of natural life in the ideal light of eternity.”[2] Calvin’s “new concept of the catholicity of religion . . . also displayed a social and political character.”[3] In the context of natural life, the political life was explicitly mentioned by Bavinck: “Also the civil and social and political dimensions of life are governed by the one law of God. Here we encounter an inner catholicity, a religion that encompasses the whole person in the wholeness of life.”[4] Therefore, “The gospel is a joyful tiding not only for the individual person but also for humanity, for the family, for society, for the state, for art and science, for the entire cosmos, for the whole groaning creation.”[5] To Bavinck, the praxis of politics was not a duty only, it was calling as well. And his personal fascination did not lead to avoiding politics either. He was interested in society and actively followed the political struggle and debate of his days. He often had a pronounced opinion about what happened at the Binnenhof in The Hague, the center of Dutch politics, and shared it with others.

In this contribution I leave the popular view of the detached theologian aside and analyze Bavinck’s opinions on political developments and issues within the Antirevolutionary Party, and along the way, the party and how its leaders operated. My leading question is what specific contribution Bavinck made to the party machine and politics of his days. This focus on politics and the party is rare in Bavinck research.[6] In order to restrict myself, I will not pay much attention to his more academic reflections on politics, or to international politics (e.g. the League of Nations), nor to his involvement in ecclesial debates to amend article 36 (on the civil government) of the Belgic confession, or his speeches and debates in the Senate. 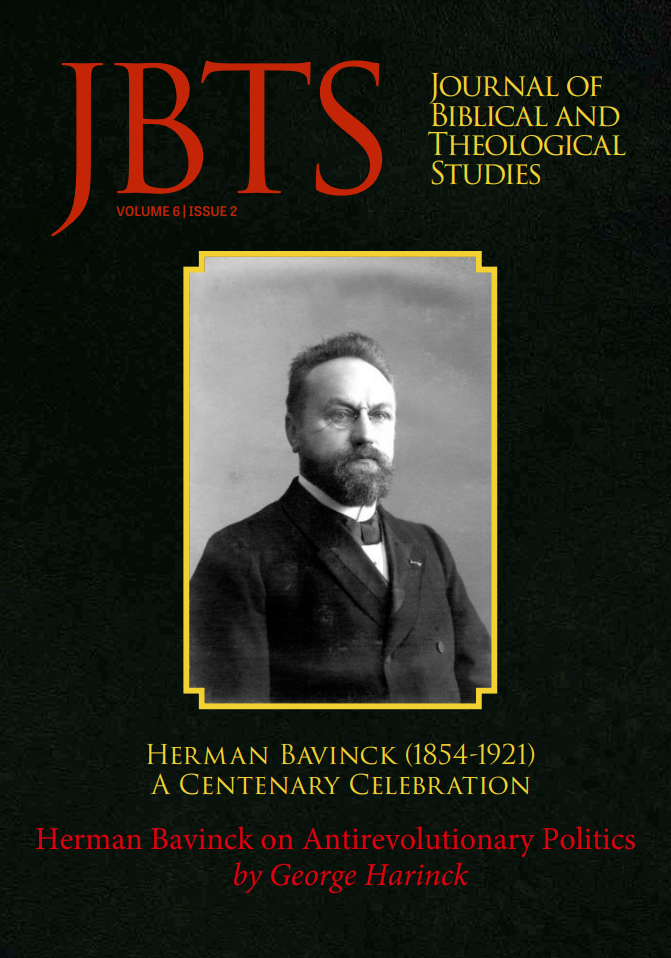