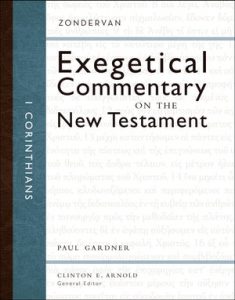 Paul Gardner received a Ph.D. from Cambridge University. After being ordained as deacon (1980) and later priest (1981) in the Anglican Communion, Gardner undertook a curacy at St. Martin, Cambridge. He then taught at Oak Hill Theological College for seven years, before undertaking parish ministry in Cheshire for over a decade. He served as Archdeacon of Exeter from 2003 to 2005 and as Senior Minister of ChristChurch Presbyterian Church in Atlanta, Georgia from 2005 to 2017.

Gardner’s 1 Corinthians focuses on verse-by-verse exegesis of the original Greek of 1 Corinthians. Each unit of the letter gets its own chapter (e.g., 1:1-9 = Chapter 1; 1:10-17 = Chapter 2; etc.). At the beginning of each chapter, Gardner summarizes the literary context and offers a one- or two-sentence summary of the main idea of the pertinent passage. Following is a translation presented in graphical layout, to show the flow of thought in the text. Then comes a summary of the unit’s structure and an exegetical outline. Next, Gardner offers verse-by-verse explanation of the text, heading each verse with the Greek text. Each chapter concludes with a section applying the theology of the relevant passage. Many chapters contain one or more “In Depth” sections, excurses that explore select translational issues in greater depth.

An introduction to the volume treats background matters. In addition to treating the usual issues (author, date, audience), this chapter offers a reconstruction of the main problem behind the letter. According to Gardner, there was “one underlying problem” in the Corinthian church (p. 32): some of the Corinthians claimed possession of the spiritual gifts of wisdom and knowledge and so became spiritually arrogant. In response, Paul preached humility as embodied in the message of the cross.

The commentary concludes with a chapter on the “Theology of 1 Corinthians,” drawing together some of the themes that the commentary treats throughout (God, the Lordship of Christ, the Christ crucified, the holy Spirit, the church, idolatry and demonology, immorality and sexual ethics, and the resurrection of Christ and his people).

The commentary is engagingly written, and Gardner brings the text to life with imaginative descriptions that elaborate on the settings described in the text.

Gardner is generally up to date in his interaction with the secondary literature. For instance, he is current in his discussion of verbal aspect (e.g., p. 682). Yet, he uses the old language of “rich” and “poor” to describe groups in the Corinthian church (pp. 507, 518), while more recent scholarship has shown that “rich” is probably an overstatement.

Gardner tends toward a formal correspondence approach to translation, rendering words that appear in different contexts in the same way each time they occur (e.g., anakrinein in 2:14-15; 10:25 [p. 464]; diakrinein in 11:29, 31 [p. 516]. Occasionally this creates a problem. For instance, Gardner wants the word mystērion in every instance to mean “things pertaining to God’s wisdom and his plan of salvation in Christ” (p. 724), although in 15:51 this word seems to refer to some specific revelation that Paul has received about the resurrection, a still-future event.

A couple of other matters of translation are of note. Helpfully, Gardner translates charismata as “grace-gifts” (following James Moffatt), pointing out that the word “spiritual” (pneumatika) is not used while also highlighting the fact that charisms are gifts from God (pp.  63-66). Gardner decides to use inclusive language to translate adelphoi (explaining his decision on p. 78).

Some of Gardner’s interpretations are unique. Gardner interprets koinōnia to mean “covenantal participation,” referring to God’s calling of a holy people to himself and the expectations of promise/blessings and judgment/curses, thus apparently deciding against a mystical interpretation. Gardner suggests that Paul’s discussion of “conscience” is not about “moral conscience” but about “self-awareness” of one’s status in church; for instance, the “weak” were those who were insecure of their status (pp. 464-5). Gardner suggests that the informant at dinner (10:28) was trying to make a point about his own freedom, and that Paul objects to the eating of idol-meat only because he objects to vaunting about one’s spiritual maturity or knowledge (p. 465). Gardner takes the minority view that pneumatika in 14:1 refers to “spiritual people” (pp. 526-7), and he insists on this point rather relentlessly throughout his commentary on chapters 12-14. He understands the verb in 12:31a as an indicative: “you are earnestly desiring the greater gifts” (p. 553). He adopts the variant reading of the final verb in 14:38. He takes idiōtēs and apistoi as references to the same group (p. 614). He imposes a very narrow interpretation of the exhortation for women to keep “silent” in 14:34-35 (p. 637).

A theological slant seems to determine his interpretation of spiritual gifts. He goes beyond the text in interpreting prophecy as exposition of the scriptures rather than as a more charismatic phenomenon (e.g., pp. 538, 549, 564; see also p. 616), and in equating “psalms” with “praising God with the words of Scripture that the Spirit has brought to their mind” (p. 624).

Helpfully, Gardner frequently strives to reconcile those of different doctrinal camps by cutting through some of the confusion of terms (e.g., on tongues on p. 598). While he qualifies his language carefully where he knows he risks disagreement with his target audience (e.g., on premillennialism on p. 683), where he strongly disagrees with a position, his rhetoric can become biting (e.g., in the “In Depth” section on 14:33c-35).

Although placement of the chapter on “Theology of 1 Corinthians” at the end of the commentary may help reinforce what the readers have encountered throughout the commentary, this material would be less easily overlooked if it were included in the introduction (where it usually appears).

This commentary is one of twenty volumes that comprise the Zondervan Exegetical Commentary on the New Testament series. All volumes, including this one, are written by notable evangelical scholars. While the series is designed for those who have two or more years of coursework in biblical Greek, all students of the New Testament will find these volumes useful. The commentary nicely balances critical interpretation with practical application, and Gardner is well attuned to contemporary issues (e.g., p. 687). While the commentary engages in critical interpretation, Gardner has little patience for “mirror-reading” (e.g., pp. 665, 692) and remains focused on the theological and practical dimensions of the text. 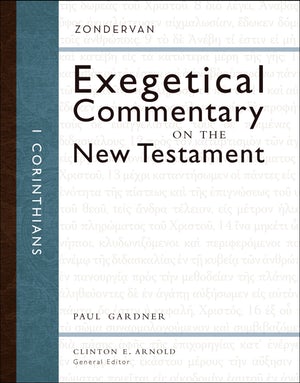