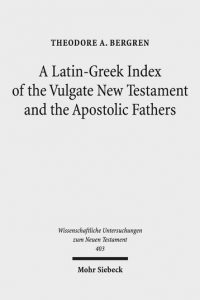 Readers who are interested in textual criticism of the New Testament will recognize the value of the Old Latin and Vulgate translations for accessing early forms of the text. The translations make available textual forms from roughly the second through the fourth centuries, while the impact of the translations on the biblical text and wider Christian history extends much further. Although the Latin translations are sometimes overlooked in New Testament textual criticism because of the number of Greek manuscripts that are extant, students of the Apostolic Fathers are not in the same fortunate position. For many texts that have been brought together in this collection, the Latin translations provide key textual evidence due to the paucity of manuscripts. Theodore Bergren’s index offers an important resource for anyone interested in Greek and Latin texts in early Christianity.

Bergren is an emeritus professor in the Religious Studies Department at the University of Richmond. He has written commentaries on Fifth and Sixth Ezra and has also compiled A Latin-Greek Index of the Vulgate New Testament (Scholars, 1991). He is thus well-placed to assist those who are working on early Christian Latin translations. The expanded volume under review is set out in a similar way to other bilingual dictionaries and concordances with which readers might be familiar. It is based on Latin headwords. Greek words are placed underneath and indented slightly. The Latin entries represent words found in the Vulgate New Testament or Latin Apostolic Fathers. They are thus terms utilized by early Christian translators, since these texts were originally composed in Greek. The Greek entries underneath the Latin headwords indicate terms for which the Latin headword is used as a translation. In addition, each Greek entry is keyed to two other Greek-Latin indexes to be discussed in the following paragraph. For those who are working on Latin translations of early Christian writings, a key benefit from Bergren’s index is thus that they can quickly see what Greek expressions may underlie the Latin text that they have in front of them.

Besides a working knowledge of the languages, two of the key tools for anyone researching Greek and Latin texts are Alfred Schmoller’s Handkonkordanz zum griechischen Neuen Testament and Heinrich Krafts’s Clavis Patrum Apostolicorum. These books allow readers of the Greek New Testament and Apostolic Father’s to look up a Greek word, find where it is used elsewhere in the corpus, and discover the translations that are employed to render the Greek word into Latin. Bergren offers an index to allow readers of the Vulgate and Latin Apostolic Fathers to find the Greek words translated by the Latin word which they are currently examining. In other words, it enables one to reverse the order. For example, if one is reading the Latin text of Polycarp’s Philippians 11.1 and wonders what Greek word might lie behind Polycarp’s description of himself as “saddened” (contristatus), they could open Bergren’s index, look up the relevant word and find that there are four or five Greek words translated by contristare and contristari. In addition, the index is keyed to the page numbers in Schmoller and Kraft so that one can undertake further examinations of how various terms function in early Christian translations.

For anyone engaged in studies of the Latin New Testament or Apostolic Fathers, this book is essential. Without the Index, one would need either to look up the Greek text of the passage that they are studying or guess the relevant Greek word. Only after this could one look up the word in Schmoller or Kraft. Bergren’s index provides a time-saving measure that enables one to keep their focus on the Latin text while quickly gathering data on Greek words that the Latin word in question is used to translate. In addition to saving time, scholars of Polycarp and the Shepherd of Hermas are able more easily to consider the Greek text that may lie behind those sections of their text for which a Greek text is not extant or is fragmentary (Pol. Phil. 10.1–12.3; 13.2–14.1; Herm. Sim. 9.30.1–10.4.5 [107.1–114.5]). By knowing what Latin words are employed to translate particular Greek terms, one may hope more accurately to retroject a viable Greek text for these portions of early Christian documents. Because attention would also need to be given to the particular translation practices utilized by the translators of the texts, a retrojection would need to be done with more precision than Bergren’s index allows on its own. However, the Index provides a very useful place from which to begin and to expand one’s data set in difficult cases.

The Index also offers a starting point for translation word studies. For example, συγχαίρω (sunchairō; I rejoice together) is translated in the Vulgate with both congratulari (Luke 1:58; 15:6, 9; Phil 2:17–18) and congaudere (1 Cor 12:26; 13:6). Both Latin words are suitable translation choices, but the question arises: why did Jerome alter his word choice? Is it anything more than stylistic variation or translator’s prerogative? Bergren’s work also enables one to get a sense of how Latin translators rendered Greek words. To take one example, the word κληρονομέω (klēronomeō; I inherit) is variously translated into Latin as hereditatem capere, heredem esse, hereditare, and hereditate possidere. One glance at this list shows that all of the translations include the stem hered-, from which come the English words inherit and hereditary. However, the diversity of renditions raises questions about why a translator may have preferred one option over another. Finally, for the philology enthusiasts who may be reading this review, it is also intriguing to note which words were more easily transliterated rather than translated. Examples include gazophylacium (γαζοφυλάκιον; gazophylakion; contribution box), gaza (γάζα; gaza; treasury), and genealogia (γενεαλογία; genealogia; genealogy).

As useful as this volume is, however, it is not without two limitations. First, some Latin words in the index are missing Greek entries that they translate. For example, consistens and consistenti are used in 1 Clem. inscription for παροικοῦσα (paroikousa; sojourning) and παροικούσῃ (paroikousē; sojourning). However, παροικέω (paroikeo; I sojourn) is not listed in the Index under either consistens or consistere. Likewise, arguably the best Vulgate manuscripts of Herm. Mand. 6.1.1 (35.1) employs paenitentia to translate ἐγκράτεια (enkrateia; self-control), but no record of this is made in the Index. These examples are minor, but the translation choices are noteworthy for anyone attempting to paint a robust picture of Greek and Latin translations in early Christianity. The second matter to observe regards the bibliography. Studies of the Latin Shepherd of Hermas have been made easier with the publication of two recent editions of the Vulgate and Palatine translations (Christian Tornau and Paolo Cecconi, The Shepherd of Hermas in Latin: Critical Edition of the Oldest Translation Vulgata, De Gruyter, 2014; Anna Vezzoni, Il Pastore di Erma: Versione palatina, con testo a fronte, Le lettere, 1994). However, these works do not appear in Bergren’s bibliography. To be fair, the Index is keyed to the works of Schmoller and Kraft. Kraft’s Clavis—the relevant work for the Shepherd of Hermas—was first published in 1963 and updated most recently in 1998. The fault of this second point does not, therefore, lie with Bergren. However, the presence of new editions points to the need for continued study of the Latin New Testament, Latin Apostolic Fathers, and the translation practices that were utilized in compiling them.

Bergren’s Index is an enormously useful tool for students of early Christian texts and translations. It expands and, with respect, makes almost obsolete Bergren’s previous valuable index of the Vulgate. For researchers who engage in textual or translation studies of early Christian texts, this book deserves the highest consideration. For the libraries that support such research, this reference tool is indispensable. 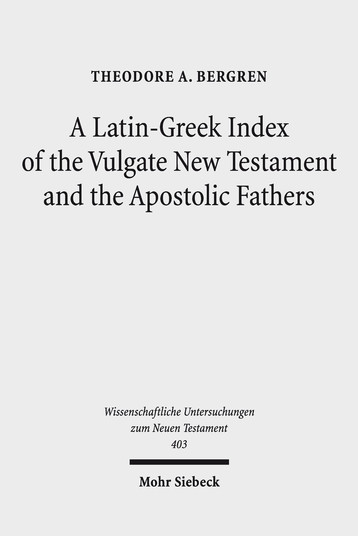