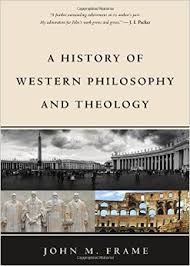 John Frame holds the J. D. Trimble Chair of Systematic Theology and Philosophy at Reformed Theological Seminary in Orlando, Florida. Frame’s A History of Western Philosophy and Theology is just one book among many that he has authored—books that span a wide range of subjects, including theology, apologetics, ethics, worship, and philosophy. A History of Western Philosophy and Theology is a culmination of sorts of Frame’s labor in expounding upon Reformed Christianity’s doctrines and applications. Frame’s latest work is a helpful account of not only the history of Western philosophy, but also of the sometimes contentious, sometimes harmonious, relationship between theology and philosophy.

Frame seeks to tell a “philosophical” story in his History—one in which he attempts to “analyze and evaluate” the history of Western philosophy “from a Christian point of view” (p. xxvi). In a day when histories of philosophy have ignored theology’s contribution to philosophical thought (or, at the very least, relegated such contribution as irrelevant to the scope of philosophy), Frame sees little difference between the two disciplines (p. xxv). More importantly, the Bible speaks to and has authority over philosophical thinking. Thus, the main emphasis of Frame’s History is to demonstrate what the Bible says regarding philosophy and philosophical topics.

Frame focuses on those thinkers “who have either made substantial contributions to the general history of philosophy or developed distinctive philosophical ideas that have influenced the theology of the church” (p. xxvi). Though Frame employs the consensus interpretations of these various thinkers, he diverges from other histories of philosophy by assessing the impact that each thinker has had on the consensus and evaluating the thinkers’ philosophies (evaluations that, Frame claims, may be found “unconventional”) (p. xxvi). Finally, Frame’s History differs from others in four distinct ways:

There are three features that I want to highlight—features that help Frame’s History to stand out among the others. First, Frame’s presentation of the material appeals to a variety of reading audiences. His writing style is accessible. Too often reading audiences find history texts to be dry and stuffy. Using a first-person perspective, Frame writes as if he is speaking to the reader, avoiding technical language without watering down the content. Related to Frame’s writing style is the “aesthetics” of the text. Each page consists of one column of text and wide side margins. The margins contain helpful information, such as images of various thinkers and asides that expound upon an idea in the text. Furthermore, each even page of the book has the current chapter’s outline, with the current topic highlighted. The outline allows the reader to know where they are in the chapter and to easily detect Frame’s flow of thought. Finally, the layout of the content makes it easy for readers to make their own notes as they interact with the text.

The second feature relates to the extras that Frame provides in History. Each chapter ends with various elements that aid in retention and further study. In regard to retention, each chapter ends with the particular chapter’s key terms. The key terms are then followed by study questions that draw out the significant topics covered. In regard to further study, each chapter offers an extensive bibliography related to the chapter topic. Frame includes both print material and online material (with full URL) in the bibliography. Following each bibliography is a “Read for Yourself” section that provides a list of suggested readings, a section the provides suggested audio lessons on particular topics or thinkers discussed in the chapter (lectures provided on iTunes from the Reformed Theological Seminary), and finally, a section that provides helpful quotes from thinkers discussed in the chapter as well as URLs to sites devoted to quotes from a particular thinker. These extras help Frame’s A History of Western Philosophy and Theology to be a valuable resource for any Christian interested in the history of ideas.

The final feature that I want to point out relates to Frame’s intentional focus on modern thinkers. History of philosophy texts tend to focus their attention on thinkers of ancient past and near past, with only a few texts nodding to living philosophers. Frame’s substantive attention to modern Christian thinkers helps to connect the past with the present, giving credence to the idea that the ideas of yesterday impact and shape the ideas of today.

It is challenging to find anything of substance to critique about A History of Western Philosophy and Theology. Frame is honest in laying forth his intentions and purpose, and he substantively deals with each of his subjects. However, if there is anything with which one may disagree, it would be Frame’s Reformed lens through which he views and interprets the history of Western philosophy and theology. As stated earlier, Frame unashamedly lays all of his cards on the table: his analysis and evaluation of the history of philosophy and theology is done through his distinctly Christian worldview. Frame’s perspective is also more specific than a Christian worldview; that is, he operates from a Van Tillian Reformed perspective. According to Frame, all of his writings have been “deeply influenced” by Van Til, so much so that Frame “explicitly” dedicated History to him. Frame also seeks to “reflect some particular emphases of Van Til’s teachings” (p. xxvii).

There is certainly nothing wrong with Frame interpreting the history of Western philosophy and theology through Van Tillian lenses. Though I personally do not identify with Van Til’s approach to philosophy and theology, there is much that I appreciate within his work. However, many who do not identify with Van Tillian Reformed tradition will disagree with Frame’s conclusions from his analysis and evaluation of philosophical and theological thought. What drives Van Til’s thought is a dichotomy between the reason of a lost person (in rebellion to divine authority) and the reason of a Christian (under divine authority). Undergirding this dichotomy is the idea that human reason is rational only when under the authority of divine revelation. When human reason is not under God’s authority, it is autonomous and therefore irrational. Thus, reasoning with the lost is essentially fruitless, for any appeal to reason on the part of the believer is to meet the lost on their shaky ground. Such an approach, in Van Til’s mind, inevitably leads the believer to irrationality. One must, then, first begin with the issue of God’s Word and his authority, for this is the only starting point from which one can come to God.

The problem with the Van Tillian dichotomy is that it virtually makes it pointless for one to reason with the lost. The Van Tillian must first convince the lost that they (the lost person) are operating under false presuppositions, which inform their wrong view of autonomy from God, which then inform their false view of Scripture. In doing so, the Van Tillian presumes what the unbeliever actually believes and seeks to convince them otherwise. In short, the Van Tillian and the unbeliever become like two ships passing in the night, unable to meet on grounds from which the lost can be led to understand the Gospel message and their state before God. In other words, for the Van Tillian, there is a fractured view of human reason that makes communication between the lost and the saved essentially impossible.

I would rather say that the issue is not with human reason first, but with the human will. It is first the will that is in rebellion against God; the will chooses what it desires, and reason follows. If this approach is correct (which I think it is), then human reason is not radically fractured in the Van Tillian sense; rather, one is able to meet unbelievers on their own grounds, for human reason is given by God and part of our very nature.

Nevertheless, John Frame’s A History of Western Philosophy and Theology is an excellent resource for one’s personal library. Whether one is a Van Tillian or not, Frame’s History places itself among the most important histories of Western thought in the English language. Frame’s boldness to write from a distinctly Christian perspective is a breath of fresh air in a day when many believe that philosophy means laying aside Christian beliefs. Further, Frame rightly fits theology into the discussion of philosophy, for the two disciplines have been intimately intertwined since the days of Thales. To write a history of Western philosophy without reference to theology is to present an anemic account of the history of ideas. Another helpful history of Western philosophy is Frederick Copleston’s classic nine volume series titled A History of Philosophy (Image Books). Copleston’s series is an excellent one to have on hand as a resource, as Copleston displays an amazing depth of knowledge of a wide array of thinkers spread over two thousand years. Another excellent history of philosophy is IVP Academic’s three-volume set titled Christianity and Western Thought: A History of Philosophers, Ideas and Movements. It provides a Christian view of the history of Western philosophy from a non-Van Tillian, evangelical perspective.