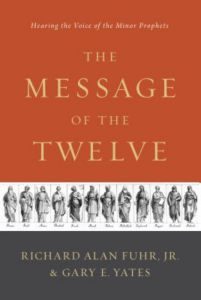 The Message of the Twelve is a careful and thorough introduction to the Minor Prophets and their possible relationship to one another. Authors Richard Fuhr (PhD, Southeastern), program director of Biblical Studies and assistant professor of religion at Liberty University in Virginia, and Gary Yates (PhD, Dallas), professor of Old Testament at Liberty University, collaborate to present the historical, geographical, and theological core of the Minor Prophets. The Message of the Twelve is an excellent introductory work that will offer students a trove of information on Minor Prophets studies.

Fuhr and Yates’ wrote The Message of the Twelve as an overview for “students, pastors, and all who seek to understand this neglected segment of God’s Word” (p. xiv). The first four chapters seek to explain the historical background of the Twelve, the prophetic role of the Twelve, the literary elements of the Twelve, and then the canonical unity of the Twelve. The remainder of the work is a book by book commentary on each the prophets. These chapters feature an introduction focused on connection to the modern world, an evaluation of the literary structure of the book, a sectional exposition of the text, and then a reflection on the significance and application of the book. The authors close their work with a call for the Church to read and apply the Twelve to daily living.

Fuhr and Yates’ work excels at balancing the competing demands of scholastic quality and general accessibility. This is most notably accomplished through interaction with, and abundant reference to, other works in the field of Minor Prophet studies. Fuhr and Yates maintain an undergraduate to graduate level of reading requirement in their book, but point readers toward deeper levels of scholarship available on the subject. Readers are made aware of issues concerning the unity of the Twelve and other debates concerning these books. Students are pointed towards further works for consideration in these areas. The authors masterfully work in maps, graphs, iconography, and visual representation of select concepts to heighten the accessibility of their work. These additions, such as the chiastic structure of Amos 5:1-17 (p. 131), are frequent enough to be helpful, but not so present as to distract from the text of the book.

Another excellent aspect of the work is the author’s ability to make the Minor Prophets relatable for the modern Church. Although woven throughout the commentary section of each book, Fuhr and Yates best make their point that these books are applicable and necessary for Church life in their closing chapter. The words of the prophets not only resonate in the past, but also for today as the Twelve “challenges the church with its ethical call for the people of God ‘to act justly, to love faithfulness, and to walk humbly’ with God” (p. 322). The authors close on the thought that the Book of the Twelve should also call the Church to look to the future with hope for God’s glorious consummation of His kingdom on earth. Making the Prophets accessible and relatable to modern life is no small feat, and doing such with the Minor Prophets is even more praise worthy. Fuhr and Yates are to be commended for their quality on the matter.

Critically, the book fails in some measure to live up to its title. Outside of the introductory four chapters on the Twelve, Fuhr and Yates do not often reflect on how an individual book is adding to or shaping the message of the Twelve. Each individual book is examined within its own context, but there is little to no expansion of how passages might work in light of the greater literary unity. It seems that there would be a place for Fuhr and Yates to include a final closing section in each book’s chapter on how that book contributes to the overall whole. Such an addition would further the argument and utility of the work. Lacking that, the reader is left wanting on this matter. Such a weakness is understandable in an introductory work, and does not ultimately remove much utility from the book, but it does remain an area for possible improvement.

Throughout The Message of the Twelve students are brought into conversation with the various Minor Prophets. More than a casual commentary, Fuhr and Yates investigate the Book of the Twelve and attempt to introduce the historical, lexical, and contextual aspects at play with each book. Their work serves as an excellent introduction to each of the books, and includes numerous references and citations of other works for students to continue on with. Biblical and theological students will be engaged by the clear and understandable writing, and challenged to broaden their understanding and appreciation of this oft neglected corner of the Old Testament. Fuhr and Yates fulfill their desire excellently in showing that “the prophets restore a vision of God’s immensity and challenge us to worship and revere him above all else” (p. xiv). 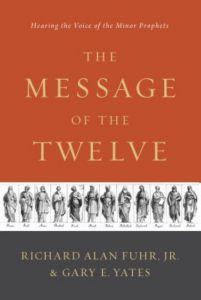