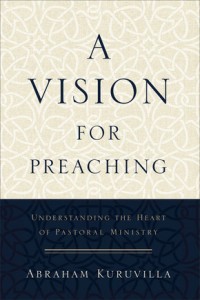 Abraham Kuruvilla (MD, University of Kerala; PhD, Baylor College of Medicine; PhD, University of Aberdeen) is research professor of pastoral ministries at Dallas Theological Seminary. He is also a dermatologist in private practice. As the consummate skin doctor, Kuruvilla treats abnormalities of the epidermis in a clinical setting and academically reflects upon divine words transcribed on vellum scrolls. His academic emphasis centers on the intersection of hermeneutics and homiletics for faithful expository preaching. This intersection is explored in his latest book, A Vision for Preaching.

Kuruvilla’s hermeneutical and homiletical proposal is encapsulated in his vision statement. He says, “Biblical preaching, by a leader of the church, in a gathering of Christians for worship, is the communication of the thrust of a pericope of Scripture discerned by theological exegesis, and of its application to that specific body of believers, that they may be conformed to the image of Christ, for the glory of God—all in the power of the Holy Spirit” (p.1). This vision forms the chapter divisions of Kuruvilla’s book and casts a theological vision chapter by chapter for each respective component of his preaching manifesto. He also concludes each chapter with an exegetical “reflection” which are “intended not only to stimulate thought, but also to serve as illustrations of the hermeneutic proposed” (p.26 n.41).

While Kuruvilla attempts to cast a foundational vision for preaching, his most significant contribution to homiletics entails an examination “of how a particular text chosen for preaching dictates specific life change in the lives of Christians” (p.6). In Kuruvilla’s assessment, the preacher must go beyond merely applying biblical propositions. He argues that faithful expository preaching must apply the specific theological point of the preaching passage, which he labels a “pericope” (p.19 n.14). Each pericope entails a precise pericopal theology, which should drive every aspect of application (pp.96-99). In this scheme, Kuruvilla opposes principlizing the propositions of the pericope to draw out generalized and varied applications (pp.7-9). Alternatively, he asserts that preachers must apply the specific thrust of the propositions. This exact thrust is dictated by authorial intent and casts a “world in front of the text,” a world that the hearers are called to “inhabit” (pp.96-97). Thus, “the goal of preaching is . . . to align God’s people with God’s will in Scripture, pericope by pericope, week by week, sermon by sermon, effecting covenant renewal” (p.133).

In many ways, Kuruvilla’s paradigm of pericopal theology is groundbreaking for the discipline of homiletics. Far too often, homileticians have avoided significant discussion of hermeneutical issues. Kuruvilla believes that this neglect often leads to a default “hermeneutic of excavation—the exegetical turning over of tons of earth . . . most of it unfortunately not of any particular use for one seeking to preach a relevant message from a specific text” (p.7). To make sense of this raw data for the preaching event, many preachers resort to “distillation” (p.7). Here, the preacher “performs a distillation of the text into propositions of the sermon that are preached in formulaic fashion, with outlines, points, proofs, and arguments, and with application drawn seemingly at random somewhere along the way. . . . Thus, the dross of texts is distilled off to leave behind the precious residue of theological propositions that is then preached” (p.8).

The obvious hermeneutical problem with this scenario is that a text means something specific, and this specificity must be exposited and applied for faithful proclamation. While principlization and synthesis are valid hermeneutical moves for the discipline of systematic theology, the purpose and function of expository preaching and systematic theology are quite different. The latter is primarily meant to intellectually develop one’s theological foundation, whereas the former is meant to transform one’s intellect, emotions, and will with pericopal theology. Because each pericope calls for specific covenantal obedience, the expository preacher is not free to principlize a pericope because he would simultaneously be generalizing the pericope’s application. Since generalized applications are seen as lacking practicality, the preacher, in the name of relevance, is tempted to emphasize his own specific application which he extrapolates from the general principle. In this move from generalization to specificity, it is unlikely that the preacher’s application matches the pericope’s specific applicatory demands. Kuruvilla’s hermeneutical solution to this problem is for “the preacher [to] . . . pay close attention to the text, not just to what is being said, but also to how it is being said and why, in order that the agenda of the author—that is, the thrust of the text, the theology of the pericope—may be discerned” (p.106). Kuruvilla is right to see that the key to faithful preaching is to re-present the pericope in its fullness.

Whereas Kuruvilla’s hermeneutic excels at the level of the pericope, he fails to see the role of redemptive-history for preaching (pp.98-99). Here, Kuruvilla neglects the sanctifying gospel in applying pericopal theology to Christians during the sermon. In its place, he proposes a concept he calls “Christiconic interpretation” (p.138). By this, he means that embracing the specific demands of pericopal theology conforms one to the corresponding attributes of the image of Christ (p.138). It appears that Kuruvilla has coined an empty phrase so that he can argue his model “[preaches] Christ” (p.140). This is seen in the fact that if one eliminates the Christiconic component from Kuruvilla’s vision, it is functionally the same concept, and reveals that Kuruvilla’s model does not actually lead one to preach Christ. This is a troublesome omission.

A Vision for Preaching is Kuruvilla’s third book on the homiletical and hermeneutical intersection of pericopal theology. It stands as a refined and much more accessible homiletic in comparison to his other two offerings (Text to Praxis: Hermeneutics and Homiletics in Dialogue, Boomsbury T&T Clark, 2009; Privilege the Text! A Theological Hermeneutic for Preaching, Moody, 2013). While the advanced student may want to engage Privilege the Text!, followed by Text to Praxis, all students should begin with A Vision for Preaching. This book uniquely gives students and pastors a strong theoretical and practical understanding of expository preaching that faithfully re-presents a biblical text and applies the text’s precise application. The importance of this book for the student and pastor is found in the reality that it is fairly easy to preach biblical truth from the pulpit when one is grounded in sound doctrine, but it is far more difficult to faithfully exposit a biblical text so that its peculiarities are seen and sensed by the congregation. A Vision for Preaching will also dissolve the mistaken notion that a preacher is faithful to his task simply because he preaches biblical truth and makes it clear and practical for the congregation. Preachers need a deeper sense of what faithful exposition entails, and Kuruvilla’s vision provides the necessary clarity to achieve expository faithfulness. At the same time, because Kuruvilla’s hermeneutic is incomplete, the student should also be acquainted with the role of biblical theology for preaching. For a good introduction on this topic, see Graeme Goldsworthy, Preaching the Whole Bible as Christian Scripture: The Application of Biblical Theology to Expository Preaching (Eerdmans, 2000). 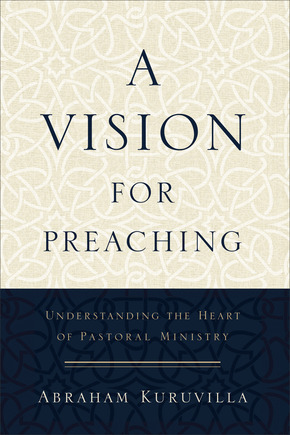