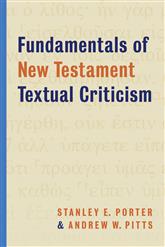 Stanley Porter and Andrew Pitts have written a new introduction to the subject of New Testament textual criticism that aims to be a “distinctly midlevel textbook” for people who have at least a basic working knowledge of New Testament Greek. The authors note the current lack of such an intermediate work on the subject. Metzger’s classic work The Text of New Testament (Oxford, 2005) provides a scholarly treatment of textual criticism some of which is too detailed to be useful to seminary students. On the other hand, introductory works, such as Greenlee’s Introduction to New Testament Textual Criticism (Baker, 1993), while they are suitable for college and first-year seminary students, do not cover some subjects or do not provide the kind of detail that students with more than one year of Koine Greek will find useful for applying text critical principles to the New Testament.

In large part, the authors have succeeded in meeting their goal of an intermediate textbook. The book’s aim of being useful to seminary students is enhanced by its covering subjects not directly under the purview of textual criticism. One example is a chapter on the formation of the canon. This is not strictly a concern of text critics, but it is a subject of interest to students as they engage in serious study of the Greek New Testament. Another chapter covers the history of the English Bible and translation theory as it relates to modern English translations. As a third example, in a chapter on types of writing materials, the authors provide a section on literacy and the function of books in the ancient world. These side discussions could prove useful for seminary students, although they are not subjects of text criticism proper.

The book begins with a chapter on basic terminology and concepts. Then, after the abovementioned chapter on the formation of the canon, it proceeds to cover topics that are standard for any book on textual criticism, including chapters on (1) writing materials, paleography, and scribal practices, (2) major New Testament witnesses, (3) text types (or families), and (4) basic concepts of textual variants. Although these topics are also found in more elementary books on textual criticism, Porter and Pitts often provide more detail. An example is in the chapter on major witnesses to the text of the New Testament, where tables are provided with details of papyrus manuscripts, majuscules, and minuscules, respectively. They are helpfully sorted by date, which provides a good running overview to the reader who is not yet familiar with the manuscripts.

The book then provides four chapters on the method of textual criticism. Chapter 7 addresses the major text-critical methodologies, including the stemmatic, the Byzantine / Majority Text, eclectic, and single-text approaches. While criticizing a “thoroughgoing eclecticism,” which relies heavily on subjective assessments of internal criteria, the authors advocate a “reasoned eclecticism” that attempts to balance external and internal considerations, with external considerations often being given more weight. The authors conclude that a general consensus exists that this approach alone “can provide adequate objectivity for textual determinations” (p. 96). The authors do admit that reasoned eclecticism has the drawback that clear criteria do not exist for weighing evidence, for example deciding between manuscripts. A little more detail here would be helpful, for example by providing examples of the approach or approaches utilized by either of the modern critical editions – Nestle-Aland (NA27 and NA28) or the United Bible Society (UBS 4 and UBS5) – and how their committees dealt with conflicting manuscript evidence. This would be particularly helpful since the authors indicate that the Nestle-Aland and United Bible Societies editions tend to emphasize the Alexandrian text (p. 95).

Chapter 8 covers the analysis of external evidence and argues for the priority of external evidence in making text-critical decisions. The chapter covers external criteria, including date and text type, geographical distribution, and genealogical relationship. The authors highlight a combined set of external criteria that consider (1) the earliest manuscripts, (2) the widest geographical spread, and (3) a lack of genealogical relationship among manuscripts (p. 108).

Chapters 9 and 10 are devoted to evaluating and weighing internal evidence. The authors note that internal criteria are important when external evidence is not conclusive. Chapter 9 covers transcriptional probabilities. It begins by stating the fundamental axiom of text criticism known as the genetic principle, that the reading that best explains the other variants is probably original. It then covers the traditional canons of text criticism used to determine transcriptional probabilities: (1) scribal errors, (2) difficult readings, (3) shorter and longer readings, (4) less harmonized readings, (5) less grammatically refined readings, and (5) doctrinal alterations. In the final section of the chapter, they address the issue of doctrinal alterations in some detail. They interact with and challenge Bart Ehrman’s contention, in his book Misquoting Jesus, that scribes routinely changed their received text for doctrinal purposes. The authors conclude, contra Ehrman, that doctrinal alteration was rarely a factor in scribal changes, and that it is relatively less important than other criteria for reconstructing the New Testament text.

Chapter 10 looks at another fact of internal evidence: intrinsic possibilities. The factors that are considered are style, cohesion, theological and literary coherence, and linguistic conformity. Regarding style, the principle presented deals with stylistic continuity: “All other things being equal, the variant that shows the most stylistic continuity with the author’s style is most likely original” (p. 130). The authors admit up front that the word “style” is not generally defined with any precision. The authors attempt to provide more a objective basis for evaluating style by considering (1) cohesion with the immediate context, (2) coherence with the author’s theological emphases, (3) linguistic consistency and (4) the author’s use of sources.

The textual factor of cohesion is treated in some detail. The author’s define cohesion in terms of what enables texts to “hang together” as a unity, and involves the evaluation of syntax and vocabulary.  They go on to note that “any device or form can be used to create a cohesive pattern, and often this will aid in textual criticism.” As an example, the authors examine the long ending of Mark and show how the lack of cohesion in vocabulary provides text-critical evidence that it is not original.

Another example from Colossian 3:9 is less convincing, and highlights the somewhat subjective nature of assessing “style” for making text-critical assessments. The authors note that the structure of the section from Colossians 3:5 to 3:12 involves 3 imperatives (in 3:5, 3:8, and 3:12) where in 2 cases (verses 5 and 12) the imperative is followed by a set of indicatives in secondary clauses. The imperative in verse 8, however, does not follow this pattern because according to the critical editions (both NA 27/28 and UBS 4/5), verse 9 also has an imperative and this breaks the pattern proposed for the other 2 imperatives.

The authors note the evidence of one manuscript, P46, which has a one letter difference (a Greek eta instead of epsilon) that creates a subjunctive instead of an imperative. They propose that this would be closer to the pattern seen after the other imperatives in verses 5 and 12. They argue that based on the Paul’s style, as indicated by the structure they identify, the subjunctive is the more likely reading in verse 9.

To evaluate this claim, one needs to turn to the author’s explanation earlier in the chapter of when stylistic considerations might be useful for text criticism, which rightly begins with, “All other things being equal…” That is, when other text-critical factors with a higher priority are not at least moderately conclusive, then issues of style may be considered. In this case, however, external evidence supports the critical editions.

Assuming the external evidence is less than moderately compelling, one could appeal to the internal category of transcriptional probabilities. The change from Greek epsilon to eta or vice versa cannot be attributed to a straightforward example of itacism (the confusion of letters that were pronounced alike). But the P46 variant could still be a scribal copying error. If we first assume that the subjunctive of P46 was original, one might propose how a scribe would change this unusual form to a more expected imperative through changing one letter. But one could also argue the other way. If the style is clearly discernible, why could not the P46 scribe have changed an imperative to a subjunctive to conform to Paul’s stylistic pattern? Here the evidence is not conclusive.

Continuing with a consideration of the internal category of style in this case, the authors propose that one prohibition was substituted for another in verse 9 – that is, a scribe substituted a negated imperative for an original negated subjunctive. But the structure they identify for the passage as a whole is imperative followed by indicatives (that presumably provide explanation). They do not explain why an imperative command in verse 8 followed by a subjunctive command in verse 9 is closer to this pattern.

In addition, in order to make a case based on structural cohesion, one would have to demonstrate from Paul’s writings that he tends to set up and then follow such structures consistently, and that content – for example, emphasis or repetition – could not contribute to deviating from a pattern.

In summary, the author’s conclusion in this case is not warranted by the evidence. Thus, although considerations of stylistic continuity can be helpful in making text critical judgments, as shown by examining the vocabulary of the long ending of Mark, a different example than the one presented from Colossians would be more helpful.

Chapter 11 deals with modern critical editions of the New Testament and provides a useful primer for Greek students who are interested not only in the history of Greek editions but in the philosophy behind the latest Nestle-Aland (NA) and United Bible Society (UBS) critical editions.

The final chapters treat topics that are useful for seminary students although outside of the discipline of textual criticism. Chapters 12 provides a helpful guide to the critical apparatuses of both the NA and UBS editions of the New Testament. And chapter 13 discusses the history of the English Bible and gives an introduction to translation theory, both topics of interest to Greek students as they learn how not only how to use their Greek New Testaments but how to teach those who do not know Greek.

In summary, Porter and Pitts have provided a good intermediate treatment of textual criticism and some related subjects. The text normally provides good examples that illustrate the principles being presented.  This book should prove useful for second-year Greek students. For those looking for more detail, Metzger’s book is the standard reference work.