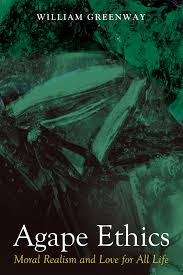 Summary: William Greenway’s Agape Ethics: Moral Realism and Love for All Life sets out to convince readers of an internal, primordial, universal morality, based primarily on the thought of philosopher Emmanuel Levinas concerning the concepts of “awakening” and being seized by the faces of others. The book contains an Introduction and 11 chapters organized into four Parts: (1) Awakening and Agape; (2) Science, Scientism, Morality; (3) Beyond Objectivity, Relativism, and Extremism: Moral Realism, Ethical Surety, and the Sanctity of Life; and (4) Perfect Love in an Imperfect World: Agape Ethics. A bibliography is included, but no Index.

Greenway’s main concern is inspiring a “spiritual awakening to agape,” longing to “reawaken a lost sense of spiritual belonging in this world, to retrieve a lost sense of communion with all creatures and all creation, and to return us to a morally realistic, ethically responsible, and truly spiritual living of life” (p. 142). The author contends for moral realism, eschewing moral relativism and moral absolutism (or even objectivism), affirming “a multitude of ethical convictions” that entails no basis for real doubt about them (e.g., the wrongness of torturing toddlers for fun) (p. 95).

Central features of Greenway’s neo-Levinasian agape ethics may be summed as follows: First and foremost, “rehabilitation of the moral self.” Second, “the inclusion of all life within the scope of moral concern.” Third, treasuring all life as valuable. Fourth, affirmation of ethical judgments based on “distinctions among the faces of Faces” as part of every ethical conviction and when circumstance forces ethical comparison of moral incomparables. Fifth, variations of distinctions and stakes can appear in forms that contravene ethical surety making ethical reflection and analysis absolutely critical for wisdom and discernment. Sixth, all ethical conviction is “a product of both having been seized (the moral) and ethical judgment” (pp. 133-34).

The final chapter presents five different scenarios, each judged ethically, which leads to the following six-fold conclusion: (1) the reality of the moral can be affirmed publicly; (2) amoral or immoral persons can be judged publicly to be insensitive to a profound reality (agape); (3) only those awakened to agape are morally qualified to engage in ethical debate; (4) moral persons will remain fully faithful to every Face; (5) moral persons will sense the tragedy and awfulness of injuring any Face; and (6) no moral persons will decide to act violently against any Face unless they are compelled by force to compare incomparables (p. 141).

Evaluation: The book begins with controversial narratives and illustrations involves animals (e.g., deer, cats, crickets), including claims such as killing a cricket equals committing “murder” (5) and “reflexively killing crickets” alienates us from “moral reality and the meaningfulness of life” (p. 3). Assuming readers continue after the Introduction, there is much to glean from this thoughtful, creative work, and some aspects to question or perhaps purge.

Greenway demonstrates solid grasp concerning the importance of science, while rightly rejecting scientism. He asserts the “modern disenchantment of the world was neither enlightened nor enlightening” (p. 49). Furthermore, “Scientism itself is not a scientific conclusion. It is a philosophical contention” (p. 54) and cannot explain all reality, including “free will, moral realism, qualia, and consciousness” (p. 60).

Valuing both human and nonhuman sensitivities and feelings justifiably concerns Greenway, as does our (human) moral responsibility to treat nonhuman animals lovingly (p. 29). He boldly claims all life is sacred (p. 33), rightly naming wrongs that diminish the value of human and non-human life (e.g., abusive experimentation on orphans and horrendous factory farm practices (pp. 33-34). Nonetheless, the author bases his rationale not on biblical or theological bases (for instance, the imago Dei or the fair treatment of animals described in Proverbs), but rather on “having been seized by the love for every Face” (i.e., seized with concern for the other) moral grounding (p. 108), which makes a moral claim upon one seized (agape)—spiritual truth seizing us primordially that we subsequently reflect upon (pp. 42-43).

While most Christians may agree we humans must treat (other) animals respectfully, Greenway likely loses readers unwilling to grant his view of virtual moral equality of animals and human beings. For instance, his viewing crickets or cats or cows as equal partners with humans may strike a tone closer to pantheistic valuations; possibly envisioning instances of unnecessarily starving human beings owing to similar religious beliefs (e.g., sacredness of cows). Nonetheless, Greenway’s stories powerfully engage minds and heartstrings, perhaps none more than “First Deer” (pp. 34-35). Furthermore, he does suggest an ethical “gradation in our valuing” (life). For instance, while all life is to be valued, valuing a little boy, then a cat, then a sapling, then a stick is hierarchically in the right order; to do otherwise would be “ethical confusion” (p. 44). This is an important distinction drawn—without which it would be difficult to imagine his view being Christian. So, while Greenway’s distinction between pre-reflective morality (agape) and its relationship to ethical judgment and ethical convictions might seem reasonable (p. 91), it lacks any sense of imperfect or distorted morality, which is attributed solely to the ethical. Important theological insights and interpretations, though, would suggest imperfections and instabilities in such alleged universal “subjective indubitableness” (p. 93); it also could challenge Greenway’s neo-Levinasian model and his opposition to any alternative primordial “given” (which he claims is more certain than any other epistemological foundation “from which a moral argument could be constructed”) (p. 40). Apparently, then, divine revelation authority or plausibility is ruled out—particularly involving ethics and moral claims based in Christian Scripture.

Consequently, Greenway’s approach appears to represent “wishful morality”: hopeful-yet-implausible within fallen creation. “Awakening” for Greenway appears to be becoming aware of and embracing universal, subjective morality concerning other faces, serving as the “passion that fires commitment to goodness, justice, and the struggle against injustice and evil” (p. 46). However, I would argue that more profoundly necessary is supremely dramatic awakening—transitioning from spiritual death to life, being rescued from the dominion of darkness and transferred into the kingdom of Christ, actively living out moral qualities given by divine power, participating in the divine nature, and escaping (natural) evil desires for a better way, including knowing Christ and remembering the gift of spiritual sight and cleansing (Eph. 2:1-10, Col. 1:13, 1 Pet. 1:3-9). Only then will human heart darkness be illumined to true spirituality—new beings renewed in knowledge in the imago Dei, adding to faith goodness and other moral qualities—flowing from the Creator-Redeemer of all life (Col. 3:9-10, 1 Pet. 1:5-7).

Greenway strongly asserts there is “no dispassionate, objective, certain basis for ethics” and “no logical path leading to sure resolution of every ethical issue” (p. 108). Yet, he returns to the claim that “having been seized by the love for the Faces of all creatures” is the “most powerful brake against the historic and enduring dangers of ethical and religious prejudice and extremism” and “our most powerful stimulus toward the good and the just” (pp. 108-09). Such a move raises the question of why call this “agape” (or Christian) rather than simply internal or universal subjectivity? Even more radically he declares, “Awakening to having been seized by love for all Faces is the ultimate and authentic source of all love, goodness, and justice” (p. 109). One might better imagine Christian commitment to Godself being that ultimate and authentic source (1 John 4:16, 1 Tim. 4:4, 2 Thess. 1:5-7).