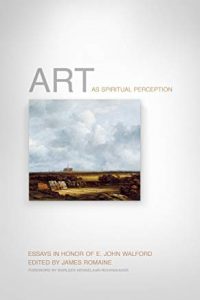 E. John Walford is an important figure in the engagement of Protestant evangelical theology with art historical studies. His interest in this relationship has been fuelled by a dual concern with the relative paucity of religious voices in the literature of art history and criticism, not least in scholarly readings of seventeenth-century Dutch landscape painting, and the related issue of the spiritual substance of artworks. These concerns reflect aspects of his own life journey as an art lover who converted to Christianity in his twenties and as a former student of the late art historian Hans Rookmaaker at the Free University (Vrije Universiteit) of Amsterdam.

These interests, and the various ways they have been expressed in Walford’s career—not merely in publications (most notably Jacob van Ruisdael and the Perception of Landscape and Great Themes in Art), but also in teaching art history courses in Amsterdam and at Wheaton College, Illinois—are highlighted in this Festschrift’s Forward entitled “Mentoring Eyes” by Marleen Hengelaar-Rookmaaker, daughter of Hans Rookmaaker. She shows, in what is a fittingly generous and clearly personal tribute (Hengelaar-Rookmaaker writes, for example, that in high school she “looked up to this highly articulate, uncannily wise, and seemingly brilliant student of my father’s,” p. 15), how important Walford’s art historical work, both in publications and lectures, was and continues to be for his students, especially in the way it portrays Western visual art as a viable and vital arena for serious Christian thinking and participation.

The 16 essays which follow Hengelaar-Rookmaaker’s Forward are testaments to this intellectual enterprise. They are all written by scholars who know Walford in different ways (most are his former students) and emulate his passion for close readings of visual imagery. This enthusiasm is most apparent in how these scholars examine works of art as visual manifestations of spiritual perception. In the introductory essay, “You Will See Greater Things Than These”, James Romaine, the volume’s editor, describes Walford’s distinct historical methodology as “content-oriented” (distinguishable from strict form-, iconographic-, biographic-, context- and market-oriented methods of art history), which involves “a careful study of the art object’s formal and iconographic elements, as well as the historical, social and religious context in which the work was created” in order to bring to light possible spiritual meanings (p. 23). This methodology undergirds the interpretive processes of every essay in the Festschrift, making most of the contributions predictably heterogeneous, some even emphasizing comparable doctrinal themes—namely, nature and the supremacy/provision of God.

A few authors, however, employ Walford’s method of “meaningful seeing” to tackle broader questions (p. 24). William Dyrness, for instance, offers an intriguing essay on the capacity of Hans Holbein’s painting The French Ambassadors (1533) to communicate an unease with the process of secularization, but also how, in conveying this information, the painting calls contemporary viewers to respond to its message. Alternatively, Calvin Seerveld attempts to philosophically ground Walford’s categorical framework for the narrative of great themes and examines how it could be developed to provide a more dynamic reading of Rococo Enlightenment artistry, using Antoine Watteau’s painting The Dance (1717-1718) as a case study. Linda Stratford, moreover, skilfully shows how the “complex play of overlapping trails and paths” in Jackson Pollock’s painting Autumn Rhythm: Number 30 (1950) can be seen as an “allegorical representation of spiritual rebirth” within the context of a Christian worship setting (p. 239).

Even so, most of the contributors understandably focus upon a single work of visual art and how, within the religious context of its creation, the artwork expresses a particular theological doctrine. Among the kinds of visual artworks evaluated, most are oil paintings and, perhaps in tribute to Walford’s own passion for seventeenth-century Dutch artistry, half were produced by Dutch/Flemish artists. It may seem prejudicial to single out a couple works of art for special comment, but the inclusion of pieces from other visual mediums, such as The Brancacci Chapel (15th c.) and Joseph Beuys’ performance Coyote: I Like America and America Likes Me (1974), encourages different kinds of analysis—in these particular cases, the evaluation privileges the audience’s perception (reception) over the artist’s intended meaning (creation). Matthew Milliner’s essay “Academia’s ‘Religious Turn’”, for instance, examines past commentary on The Brancacci Chapel in order to show how these responses disclose a turn to the religious in art historical criticism (p. 92). Similarly, James Watkins’ essay “The Liberating Myth” surveys how the viewer’s perspective on the origins of Beuy’s personal mythology directly influences his/her interpretation of I Like America’s iconic, and possibly, liberating “action” (p. 255).

Although the volume contains a helpful introductory essay by Romaine (the editor) on Walford’s historical methodology and an essay by Hengelaar-Rookmaaker concerning the personal and professional relationship between Walford and several of the contributors (both essential to a Festschrift), there is no added entry by the honouree himself. While such a contribution is not necessarily expected for a Festschrift, readers would have benefitted from a brief account by Walford, say, on his then recent work in digital photography which is only touched upon in the Acknowledgments and Afterward, “A Portrait of E. John Walford”. Furthermore, a few of the essays are in need of some structural editing. It does not aid the reader, for example, when the thesis is not clearly presented until nearly halfway through the essay or, in the case of two essays, omitted altogether, leaving it to the reader to work out the central claim.

Overall, however, this Festschrift is commendable not only because it offers a contextualized analysis of 16 works of visual art from 16 notable Western artists whose lives and work span from the fourth-century to the twentieth-century, but also because it provides fresh and variegated contributions to both the fields of art history and Christian theology—not least in the way it shows how art can be a powerful expression of spiritual perception and meaning. Due to the topical breadth of the essays which comprise this volume, it is perhaps best a resource to be selectively utilized in accordance with particular interests. A number of essays, for example, would directly benefit students who are examining the artistic interpretation of key Christian doctrines within a particular period of Western history, while others might better serve as topical readings for introductory or more specialized courses on art and art history. In many ways, Art as Spiritual Perception is a milestone of Walford’s andragogical vocation even as it continues to provide readers the benefit of his artistic insight. 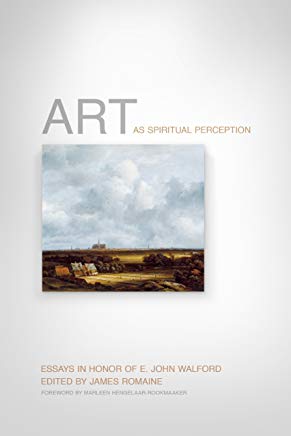