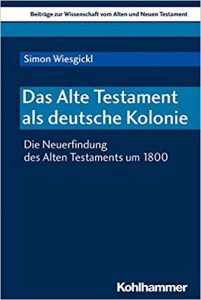 The main point of this book is that both Orientalism and colonizing in practice were driven by German biblical scholarship of the OT. There is a need for a critical history of commentary, which this book seeks to meet. Roland Boer has pinpointed Martin Noth but the problem goes further back; German scholarship has not been self-aware (cf. E. Stegemann).  We see it already well documented in recent histories of philosophy, e.g. Hegel’s Master-Slave derived from discussion of slave trade in Haiti. When Schiller observed that less developed peoples remind us of childlike love, this is part of the same ‘primitivism’ to which the likes of Herder and the Humboldts subscribed.

Despite being a fascinating account there are times when the book ‘jumps’ or even doubles back on itself, repeating or expanding points already half made elsewhere. Secondary literature is rather dealt with as it goes along, like more flavouring thrown into the soup as it simmers,  and usually added uncritically. In Search of the Hebrew People. Bible and Nation in the German Enlightenment by Ofri Ilany is one book that is possibly just too recent to be able to evaluate as so significant, and there is overall a bit of a ‘shock of the new’ throughout this book.

Attempts at writing histories of OT exegesis are considered: Diestel from 1869; Kraus from  1956 (with more theology and hagiography in its account, as well as an anti-Enlightenment bias); Reventlow from 2000, who affirmed archaeology, classical parallels and humanism in the history of biblical scholarship, yet who eschews projections by Enlightenment interpreters on to prophets and ‘personalities’.  Lastly, the great multi-authored work (Hebrew Bible/Old Testament), edited by M. Saebø is considered to be rather traditional, and lacking in its coverage. Suffice it to say that  only now in the last decade are we beginning to realise the connection of scholarship with Orientalism.

As for Edward Said’s Orientialism, although it did acknowledge the revolution in German biblical scholarship as having a role to play, Said gave it very much only a bit part. It was perhaps not so important to Said that it was German Protestantism during the late Enlightenment that served to define Judaism.  The idea of a discovery of a religion  helped Europe to identify itself through ‘othering’. Yet the criticism of modern scholarship led to a cosy relativism of a dubious ‘international’ and universal sort. From 1850 there was a German Imperialism in OT history writing, and not much escape from that style in the following century.  As early as the mid-seventeenth century, travel reports provided useful archival grist to the commentators mill. The J.D. Michaelis-planned trip to Yemen 1763-7 was for the sake of his biblical scholarship. Michaelis did not go, but at least he read Carsten Niebhuhr’s reports. (Max Muller never went to India, one learns en passant.) Then there was George Forster, who voyaged with Captain Cook, writing an account of those adventures with far from an official imperialist line, yet one that was nevertheless culturally imperialist.

To turn the tables and critique the critics Jürgen Osterhammel has suggested that one take non-western sources (e.g Egyptian) into account, and use them critically for a purer historiography against the western nineteenth descriptions: for these are not merely that, but in a certain light betray a spirit of cultural hegemony (Gramsci), a rhetoric of control. The fact is that the Hebrew bible is still getting used today in political discourse (as per Konrad Schmid), as if such Nachleben were unproblematic. This concept of Nachleben is double edged: it can mean a living text (Benjamin), as an antidote to Historicism, yet in disguise for while actually part of the Nachleben of the bible modern scholarship pretends to be pure and objective towards the text in its historical context, positioning itself as advocate of it.  Foucault was right to have spotted the unconscious at work in the ordering and classifying of eastern cultures. Furthermore, the Reader is not contextualised while the Text is: F. Segovia has seen the newer ‘literary criticism’ approach as taking away from author and reader to elites, and to be just as bad as a historical criticism, for each claims that it never commits eisegesis.

There is a need for a historical criticism that is more self-critical. Famously Karl Barth had said something like that, but he had seen the Grenze as that between humanity and God (or more accurately humanity and the gospel). Of course there is ‘idolatry’ in scholarship. In religious studies, Gavin  Flood attacked the information gathering of the phenomenological approach in its constructing images out of raw material after its own imagination.  Michaelis wanted philology to help receive the biblical words as a living language. New rules were set to reflect the idea that the text had been in flux:  it was not always the majority version that were the most reliable manuscripts. There became a preference, with Bengel for the lectio difficilior/brevior, not the traditional lectio clarior.  Huet had used deceitfulness to talk of ANE myth as falsifications, with the bible responding to those in more truthful a way. This was all helpful to learn what was on offer. However, this could be inverted: the original was the purest, the less self-aware, the noblest. Thus orality came before writing (here Herder reversed Lowth, maybe with an anti-Jewish agenda, and Rousseau and Schelling were likewise minded.) In the minds of these late eighteenth-century thinkers, Germany, as the land of poets and thinkers was called to draw out the treasure of Jews. Futhermore, German identity as a collective formed from individuals encouraged the common enterprise of an intellectual conquering of world as preparation for action. The German was light on his feet and not weighed down morally; he travelled the world like the Jew, but for a different purpose.

In Chapter Five one learns that Herder disliked Michaelis’s new bible translation, which he viewed as introducing a new religion, as if discovering a new world, making Hebrew religion very much ‘other’ and there to be mastered, like foreign shores. Indeed, Michaelis saw the  present-day Arabs as practising Moses’ law in their customs. Hebrew was not a divine language but related to its environment. Happy Arabs needed to be asked learned questions. There was a fixed idea that oriental culture had not developed as much as western did, since only now  was it meeting other civilizations. Take the topic of blood revenge, just like Arabs in the timeless Orient is what is expressed in Num 35,12; Deut 19,6; Moses simplified it with intellectual authority, as someone like Montesquieu’s rational lawgiver, as the one to educate the Hebrews to a higher level, for they very much needed it. Now for Michaelis, post-biblical Judaism differed markedly from Hebrew religion; the latter, open to being taught, was more like contemporary ‘patriarch-like’ Arabs whose language never changed.

Eichhorn affirmed that cultural change caused any literary change. In the bible itself however there was change—and this (the point needs more emphasising) was what was being realised around 1800.  De Wette confirmed the difference between Hebraismus and modern Judaism, but from within the biblical texts (internal evidence). The universal religion was Christianity since Judaism had narrowed itself.  Eichhorn’s 1794 Einleitung became a standard work, arguing that some biblical layers were oldest and purest, expressing a pleasing primitive religion,  reaching back to the childhood of man, and religiously and culturally authentic. Such an essentialism of the Orient would last as long as Martin Buber. To this a dissenting voice was raised by Herder: each culture is different (Ältesten Urkünde 1775), and races are not interchangeable, although he did think Africans were more sensual due to climate, as Michaelis had suggested about the ‘lusty’ Arabs. Yet Herder would mostly resist Michaelis’  Compendium theologiae dogmaticae and its conclusions. One had to breathe the fresh air of the East not just theorize from data. For Herder the job of reaching back to the far past was necessary and the job of interpretation for now had to be done with care. One could not rely on contemporary parallels to primitive folk. ‘An Johann Gottfried Herders Schöpfungshieroglyphe wird schließlich deutlich, dass diese Verschiebung Teil einer generellen Verfremdung war, bei der der Orient in die Ferne rückte und nunmehr nur über hermeneutische Wege und in Form von Denkmälern der Vergangenheit zugänglich schien.’ (230)

Herder borrowed the dualism from Hume of a lively faith as opposed to a thinking person’s philosophy. Herder viewed the Pentateuch not as a collection of episodes from different sources, but as a wild epic (cf. the Scottish Ossian), and as the product of a literary culture at a despotic court, even as also the product of a primitive imagination. However by 1805 Johann Severin Vater in his Commentar über den Pentateuch argued that the first five books of the OT consisted of a patchwork collection, to be separated out into their strands and that was the way ahead for the rest of the century and beyond—again the significance of this move is rather underplayed.

There is a lot to learn in this book, and it is useful to see various worlds of discourse interacting. However the structure of the whole is not quite what it should be, and just what the conclusion or thesis is, is not totally clear. The biblical-scholar players are left behind after De Wette, yet there is a story of Orientalism in other disciplines sketched (the build-up to full speed German colonialism after 1850) that is not really given any correspondence in the history of exegesis. Instead there are things like F.W. Zachariae (1777)’s reporting on the South Sea natives: just how well does this relate to the anthropology (historical or otherwise) of the OT?  Sometimes too many stories vie for space. But it is a worthwhile and thought-provoking attempt to open the conversation. 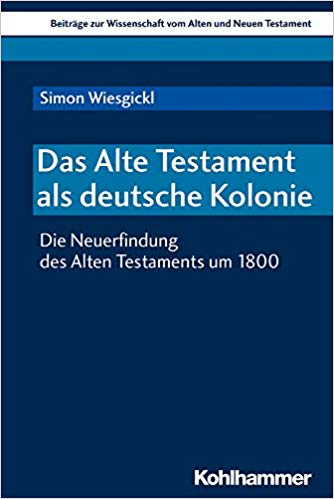