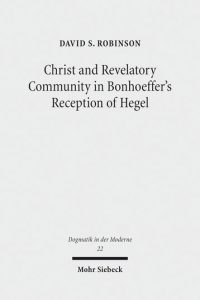 David Robinson was recently appointed as the R. Paul Stevens Assistant Professor of Marketplace Theology and Leadership at Regent College in Vancouver, Canada. The text under review is based on his doctoral dissertation at the University of Edinburgh. In it, Robinson seeks to recast Bonhoeffer’s reception of Hegel in a highly nuanced manner that is ultimately more positive than most previous appraisals. Rather than “demolition,” “revolt,” or “confrontation,” Bonhoeffer’s reception is seen as aiming to “repair” aspects of Hegel in “eclectic and Christologically intent” ways (pp. 11-12). For Robinson, such “intent” is especially apparent in Bonhoeffer’s transposition of Hegel’s “revelatory” notion of “God existing as community” to that of “Christ existing as community”—a significant move since this latter phrase is often a shorthand for Bonhoeffer’s overall program (p. 16).

In comparison to earlier studies of the Bonhoeffer-Hegel question, Robinson’s approach differs in three ways (p. 17). First, whereas much of the previous scholarship placed inordinate attention upon Bonhoeffer’s second dissertation (Akt und Sein [1931]), Robinson’s approach is diachronic with regard to Bonhoeffer’s corpus (pp. 16-17). Second, Robinson seeks to more precisely account for Bonhoeffer’s and Hegel’s differing socio-political contexts rather than buying into to the “lingering insinuation that Hegel was a proto-apologist for the Third Reich” (pp. 17-18). Finally, each section begins with treatment of Hegel on Hegel’s own terms before moving to Bonhoeffer’s reception, avoiding conflation of Hegel “with the neo-Hegelianism of Bonhoeffer’s time” (p. 18). Robinson’s distinctive approach results in a weighty original study that deserves serious consideration by Bonhoeffer scholars. Others interested in an up-to-date, albeit advanced-level engagement with Bonhoeffer or Hegel will also find Robinson’s efforts pay great dividends.

The book unfolds in three parts. In part one, Robinson offers two instances in which Bonhoeffer’s unnuanced portrayal of “Idealism” as “self-confinement” has obscured how his thought is indebted to the “sociality of reason” in Hegel (p. 18). In this regard, chapter one traces how the “human sociality” correlated with Hegel’s “objective Geist” influences Bonhoeffer’s recovery of “Word before Geist” and “revelation in hiddenness,” and affects Bonhoeffer’s shift of subject from Hegel’s “God existing as community” to “Christ existing as community” as well as Bonhoeffer’s shifting of “ecclesial” action from Hegel’s reciprocal “confession” to “intercession” (pp. 26, 61). Chapter two then explores Bonhoeffer’s exposition of Genesis 1-3 in Creation and Fall (1932-33), revealing a dependence upon Hegel’s account of fallen humanity’s perpetually “cleaving” mind, i.e., “a drive for unity in the knowledge of good-evil that in turn divides the knowing subject” (p. 89). On this basis, Robinson observes that Bonhoeffer subverts Hegel’s supposed “knowledge” of “primal humanity as a volatile composite of nature and Geist” (p. 89). The ethical and political implications of this postlapsarian epistemological impossibility are hinted at, particularly through a contrasting of Hegel’s and Bonhoeffer’s respective usages of first-person pronouns and through comment upon Bonhoeffer’s employment of the Hegelian terms Aufhebung (noun) and aufheben (verb) in “critical response to Hegel” (pp. 89-90). Robinson’s treatment of the running debate over how Bonhoeffer’s usage of these terms should be rendered in English to consistently hold together the tension of their “negating,” “preserving,” and “elevating” senses, as opposed to the many instances in which translators have made unequivocal interpretive decisions for readers, is both thorough and convincing (pp. 59-61, 87-89, 121).

In part two, Robinson turns his attention to Bonhoeffer’s Christology lectures (1933). Chapter three argues that Bonhoeffer’s polemic against Hegel’s “docetic” distinguishing of “Idea” and “Appearance” serves as a foil in resourcing Bonhoeffer’s desire to begin with a united Christology rather than with abstract conceptualizations of the two natures (pp. 19, 124-25). While Robinson here covers whether Hegel should be suspected of “pantheism” (pp. 109-11), the anachronous but important question of Hegel’s relationship to what Karl Krause labeled as Hegel’s “panentheism” in 1828 could perhaps have been touched upon in a footnote, especially since many see “panentheism” as part of Hegel’s legacy for later theologies. That minor scruple aside, Robinson’s persuasive discussion surrounding Bonhoeffer’s Menschenlogos-Gegenlogos dialectic turns upon the divine-human Christ as the “counter-logos” (instead of earlier translations of Gegenlogos as “anti-Logos” or “against reason”), so as to establish “Christology as ‘the invisible, unrecognized, hidden centre of science [Wissenschaft]’” (pp. 117-19). Chapter four then discusses Christ’s “real presence,” not only with respect to the Eucharistic sacrament, but also Bonhoeffer’s view of the “disruptive” preached Word “as sacrament” (pp. 19-20, 152). As Robinson points out, Hegel emphasized the spirited community’s role in doctrinal transmission whereas Christ is “presence” rather than “doctrine” for Bonhoeffer (p. 20). Further, Hegel prioritized “the self-sufficient ‘Idea’” whereas Bonhoeffer stressed instead “the contingency of [the Word’s] ‘Address’” (p. 20).

Unlike most previous studies of Bonhoeffer’s reception of Hegel, part three moves the discussion into Bonhoeffer’s post-academic “confessing” period (p. 20). Through engagement with Discipleship (1937) and Ethics (early 1940s), Robinson pinpoints Bonhoeffer’s and Hegel’s differing political situations to show how Bonhoeffer’s “confessing” identity was formed in reaction to Hegel’s era of “deconfessionalisation” (p. 20). In view of differing interpretations of the Sermon on the Mount, chapter five traces Bonhoeffer’s diagnosis of Hegel’s “French revolutionary” Jesus as leading to a “docetic-Idealist ecclesiology” that eventually led to “state overreach” (p. 20). Bonhoeffer correctively posits “Jesus’ social teachings as the basis for a seminary community that could renew the distinction between church and state” (p. 192). Even so, Robinson argues that Bonhoeffer here was not truly anti-Hegel so much as he was against “a brutal, sub-rational Reich, the likes of which Hegel could not have foreseen” (p. 192). Chapter six then seeks to untangle Hegel’s “culturally prejudiced mind” with regard to Volk, race, and “world-history” towards a more nuanced reception that accounts for Hegel’s own criticisms of “nationalist expressions in his time,” including the notion that poor treatment of foreigners could cause the state to “forfeit its own principle” (p. 195). This is worth comparing to Bonhoeffer’s assessment of the Nationalist Socialist state’s “self-negation” due to its marginalizing of Jewish people (p. 195). A fascinating case study of W.E.B. Du Bois’s race-critical engagement with Hegel is offered as an alternative to the neo-Hegelianism that was contemporary to the Third Reich (pp. 199-202) before Robinson explores Bonhoeffer’s embracing of “an emerging global ecumenism” as well as “the difference between Bonhoeffer’s attempt to discern the ‘form of Christ’ in history and Hegel’s work to track the ‘shapes of Geist’” (p. 227). What ultimately emerges is Bonhoeffer’s “particular account of the whole [that] leads to a fuller reckoning with those on the ‘underside of history’, particularly diasporic peoples” (p. 227). Given all this, it is not difficult to see how the discussions featured in this third part can serve as a theological resource for contemporary dialogue surrounding matters of racial, multicultural, and religious diversity (pp. 236-37).

Overall, Robinson succeeds handsomely with regard to his sustained critical treatment of Bonhoeffer’s reception of Hegel. Renewed interest in both Bonhoeffer and Hegel in recent years makes the book timely, especially since publication of the critical edition of Bonhoeffer’s works in English was only finally completed in 2014. 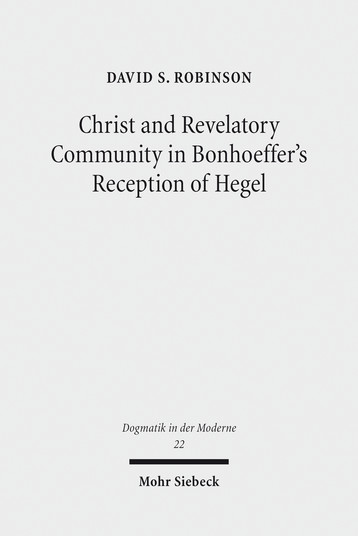