The emergent consensus that Acts was written post-70 CE but pre-90 CE is not much more than “political compromise” says Karl L. Armstrong in Dating Acts (p. 3): fraught with methodological and interpretive problems; Armstrong received his PhD (Christian Theology) from McMaster Divinity College in Hamilton, Ontario Canada, and Dating Acts is a revised form of his PhD dissertation there under Dr. Stanley E. Porter.  According to Armstrong, the re-asserters of a late (post-100 CE) date for Acts—a growing minority—fare no better than the current consensus, given as they seem to be to ideological literary theories which, while commendably creative, have not come to grips with the powerful traditional arguments for an early date of Acts made in days gone by. In Dating Acts, Armstrong demonstrates these assertions and completely re-founds a case for the early date of Acts (à la Rackham) in light of contemporary historiography and linguistics.

Summary: Following his introduction (summarized above), Armstrong offers a chapter on historiographical method (chapter 2) and advances a series of principles which define the procedure of the study: for selecting and interpreting sources, defining facts and events, and for drawing relevant textual conclusions (pp. 29–33). The proposition to be defended: in light of the relevant evidence, it can be plausibly shown that Acts was written before 64 CE (~ 62–63 CE).

Asking the question as to how one’s theory of sources impacts one’s view of the date of Acts (chapter three), Armstrong eschews notions that Acts is a pastiche reducible to literary sources and invention, and defends the notion that the author relied on personal memory and eyewitness and written sources; common areas of discussion (the prologue; the “we” passages) are treated here. Armstrong also employs linguistic and text-critical examination of the relevant texts in support of two major source theories which would seem push the date of Acts later: that the author of Acts depended on the Pauline corpus (mentioned below), and/or on the works of Josephus, and finds both wanting (chapter four).

The treatment of the end of Acts is the capital contribution of the monograph and spans much of its content (chapters five through eight). The traditional hypothesis—that the author narrated only what he knew, and thus that key omissions demonstrate that Acts was likely written before the omitted events occurred—is defended with new rigor. In addition to offering a history of interpretation (chapter 5), Armstrong appeals to papyrological and historiographical data to set Acts 28:17–28 in its Jewish historical context (hopefulness is projected with respect to a Jewish response to Paul, consistent with a pre-70 AD date; chapter six), Acts 28:11–31 in its papyrological context (the Western text helps to demonstrate the earliness of the text; chapter seven), and the end of Acts ultimately in its Greco-Roman context (the omission of key socio-political events of Roman history move the date back even more concretely before 64 CE; chapter eight).

Evaluation: A critical point of framing in the methodology of the monograph is that Armstrong demonstrates that any treatment of Acts as ancient historiography demands a treatment of its date—there are too many relevant and important reliably datable events to be ignored (the reign of Nero, the fire in Rome, the death of Paul, the Jewish war, the destruction of the temple). At the same time Armstrong also demonstrates that those looking to examine the date of Acts must do so informed not only by ancient history, but also by contemporary historiography (pp. 23–9). This is commendable, yet those familiar with the field might wish that there was more explicit interaction with particular historiographical methods or models: for example, are there particular historical methods, or considerations of historical epistemology, which would further aid the case? It is implied throughout but not made explicit here.

With respect to source-critical issues, it is commendable that Armstrong interacts primarily with the classic work of Jacques Dupont (but also especially Cadbury) and in so doing shows that some important insights of Dupont have not been properly emphasized (pp. 69–73). It builds confidence in the reader that the author is not merely relying upon secondary literature (in this case, of secondary literature) but is dealing with his sources themselves. In an over-saturated field, the solution is perhaps not to rely on this or that summative work, but to identify key and classic works and to be well-familiar with them.

As regards the specific source-critical issues of the author’s dependency on the Pauline corpus and/or Josephus, while it is noted that the latter view is more determinative for dating Acts, the options available on the Pauline-dependency thesis could have been spelled out in greater detail since in theory there could have been dependence on an early letter collection (thus not demanding a late-date). Admittedly, however, this would have meant an excursus on the whole topic of Paul as a letter-writer and of the Pauline letter collection.

As regards the monograph’s major contribution, it is praiseworthy that Armstrong devotes a chapter to a history of interpretation. This is in keeping with good historiography (and is a tacit consensus amongst pre-modern, modern, and post-modern historians/philosophers of history), as one cannot situate oneself properly with respect to a historical interpretation of a matter if one does not consider how that matter has come down to the present in the published literature of historians. This sets the stage for the major contribution, and if this historiographical point was spelled out explicitly (even touched upon in the methodology chapter) there would have been a sense of even greater coherence when arriving at this chapter.

Also as regards the major undercurrent of argumentation in chapters six through eight, the reasoning throughout could have been made stronger by appeal to the philosophical/historiographical literature as to just how strong certain formulations of argumentum ex silentio can be. For example, it could be asserted (as some have) that other ancient authors (like Thucydides) do not conclude events ostensibly important to them (like the Peloponnesian war) even while they know the outcome. Armstrong considers such points made by middle-position scholars (i.e., those who date Acts post-70 but pre-90 CE), and he does mention the argument from silence (p. 114 and n. 17), but as it is the main counter-argument to his primary contribution there could have been more explicit appeal to philosophical and logical reasoning here (see for example Timothy McGrew, “The Argument from Silence” Acta Analytica 29 [2014] 215–28). However, this is clearly implicit and the data marshalled is compelling.

Considerations: Armstrong’s chapter two will be a particular benefit to read because of its treatment of contemporary historiography. A course is (briefly) charted through the conflicting seas of hard-empiricist historiography and poststructuralist historiography, and the benefit here concerns how these theoretical considerations in the philosophy of history can aid in the outline of an approach and model for defining, selecting, and interpreting evidence. In this light, those who want to see how a project informed by historiography (and especially attentive to issues of language and text) can be undertaken for New Testament studies will benefit.

Those interested in examining the evidence for an early date of Acts (or defending this position) will be greatly helped by the volume. Armstrong is invariably fair to his sources and demonstrates the claims he makes with the kind of varied evidence one expects of a New Testament scholar. In one sense, a sub-highlight of the book is something of the exposé it offers of consensus position.

Ultimately, Dating Acts is a learned shot-across-the-bow with respect to the middling consensus and the more radical emerging minority of late-daters; none dare ignore it. 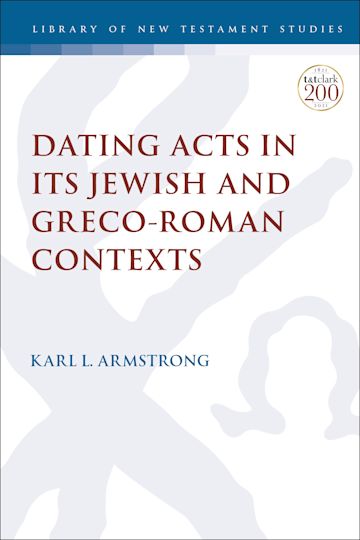