Barbara Pitkin is Senior Lecturer in Religious Studies at Stanford University, where she teaches on the history of Christian thought, including the sixteenth-century reformations and the history of biblical interpretation. She is the author of What Pure Eyes Could See: Calvin’s Doctrine of Faith in its Exegetical Context (OUP, 1999), editor of Semper Reformanda: Calvin, Worship, and Reformed Traditions (V&R, 2018), and co-editor with Wim Janse of The Formation of Clerical and Confessional Identities in Early Modern Europe (Brill, 2006). Pitkin also serves as an editor for the Sixteenth Century Journal and is a former president of the Calvin Studies Society. 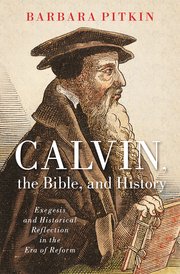 In Calvin, the Bible, and History, Pitkin investigates Calvin’s biblical exegesis through a series of case studies and seeks to show how he was consistently historically attuned. Though Pitkin argues that Calvin was not a historian per se, she demonstrates that Calvin was an astute exponent of the Bible as history. Chapter 1 functions as the book’s introduction, which summarises, in broad terms, how Calvin’s biblical interpretation was influenced by exegetical tradition, his legal and humanist studies, and the social and political context in Geneva and beyond; it outlines key features of Calvin’s interpretative approach, such as his commitment to ‘lucid brevity’ (p. 17) and the unity of scripture; and it sketches the trajectory for the book’s remaining chapters. Chapter 2 examines Calvin’s reception of Paul, including both his epistles and his appearances in the book of Acts. Pitkin shows that, for Calvin, Paul’s theology (especially as articulated in Romans) was the key to understanding the rest of scripture. Chapter 3 then examines Calvin’s treatment of John’s Gospel. Calvin’s historicizing approach meant that he rejected earlier commentators’ assumption (informed by fourth-century Christological debates) that the primary purpose of the gospel was to communicate doctrine concerning Christ’s divinity. Instead, Calvin emphasised its soteriological themes. From Chapter 4 onwards, Pitkin pivots her focus towards the Old Testament. Chapter 4 focuses on Calvin’s treatment of David in the Psalms, who he saw as a model for Protestant faith. Chapter 5 convincingly argues that Calvin read Isaiah’s prophetic message to Israel’s exiles as a mirror for his own sixteenth-century context. This fascinating chapter — which, for this reader, was one of the highlights of the book — illuminates how sixteenth-century experiences of exile informed Calvin’s readings of the prophets in profound ways. In Chapter 6, Pitkin discusses Calvin’s exegesis of Daniel and shows that Calvin eschewed eschatological interpretations of Daniel’s prophecies, preferring to see them as being historically fulfilled in Christ’s first advent with their contemporary significance drawn out by way of analogy. Chapter 7 focuses on Calvin’s harmony of Exodus, Leviticus, Numbers, and Deuteronomy, drawing attention to how trends in early modern historiography informed this work. Finally, Chapter 8 compares Calvin’s expositions on 2 Samuel, delivered against the backdrop of the French Wars of Religion, with François Hotman’s Consolatio è sacris litteris, emphasising their mutual commitment to ‘sacred history’. The book closes with an epilogue, outlining the main contributions of this book and potential avenues for future research.

There is much to commend in Calvin, the Bible, and History. By focusing so intently on Calvin’s historicizing approach, Pitkin illuminates an important and unifying theme of Calvin’s exegesis. She convincingly shows that while he handled different biblical genres with distinct emphases, and was frequently conscious of his text’s application to his contemporary context, he was nonetheless absolutely committed to upholding the importance of a historical reading of the Bible. Indeed, Pitkin rightly notes that even when Calvin engaged in typological exegesis (an approach widely used by early modern Reformed exegetes) he did so without relinquishing a clear sense of his passage’s own historical context. In fact, she argues that this historicizing impulse is so pronounced that ‘few if any were as consistent’, as Calvin, ‘in seeking to preserve the integrity and unity of that history – as Christian salvation history, to be sure, but history nonetheless’ (p. 4). Pitkin also helpfully shows how Calvin applied the biblical text to his sixteenth-century context, consistently but in varying ways, while maintaining his determined commitment to a historical interpretation of the biblical text.

While Pitkin admirably draws out these distinctive aspects of Calvin’s exegesis through her seven biblical case studies, one can still detect signs of the book’s origins as separate chapters and articles, originally published between 1993 and 2014 (p. x). In chapter 8, for example, where Pitkin engages in comparative analysis between Calvin’s sermons on 2 Samuel and Hotman’s Consolatio, she breaks from the preceding chapters’ more exclusive focus on Calvin’s exegesis, suggesting that they had originally been developed in different contexts. This observation is not intended as a criticism of the quality of Pitkin’s research — indeed, the comparison between Calvin and Hotman is illuminating it its own right — but it does serve to illustrate a slight unevenness of methodology, despite Pitkin’s overall success in drawing a unified line of argument throughout the book.

Notwithstanding this minor quibble, Calvin, the Bible, and History is a valuable resource for scholars of John Calvin, Reformation history, and the history of biblical interpretation. Pitkin’s careful and enlightening exploration of Calvin’s commitment to the ‘sacred histories’ provides an important glimpse into how and why Calvin handled distinct biblical genres in the manner that he did. While this book will primarily benefit researchers, students may also benefit from this work, especially from Pitkin’s discussion of Calvin’s reception of Paul in Chapter 2, which so compellingly demonstrates how Romans functioned for Calvin as a hermeneutical key for understanding the rest of scripture. Students at all levels would be well served by the insights offered by this chapter, which could profitably be read in isolation. That being said, students who are dipping their toe into scholarship on the Bible in the Reformation era for the first time may find chapters in volume 3 of the The New Cambridge History of the Bible (CUP, 2016) a more accessible starting point.

In the years to follow, we can hope for further research that builds on Calvin, the Bible, and History, but in the meantime those of us with interests in early modern biblical interpretation should be grateful to Pitkin for her careful and thorough exposition of Calvin’s commitment to history in his exegesis.