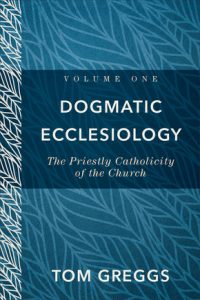 Professor Tom Greggs holds the Marischal Chair of Divinity at the University of Aberdeen. He has authored numerous articles and books, including Theology Against Religion: Constructive Dialogues with Bonhoeffer and Barth (T&T Clark, 2011), Barth, Origen, and Universal Salvation: Restoring Particularity (OUP, 2009), and the forthcoming The Breadth of Salvation: Rediscovering the Fullness of God’s Saving Work (Baker Academic, 2020).

In Dogmatic Ecclesiology Volume 1: The Priestly Catholicity of the Church, Greggs presents us with the first entry in a three volume project. The themes of the three volumes reflect a coordination of the threefold office of Christ as priest, prophet, and king with the Nicene-Constantinopolitan Creed’s description of the church as catholic, apostolic, and holy. Volume 2, then, will address the church’s “prophetic apostolicity,” while volume 3 will attend to its “kingly holiness” (p. xxi). As if such a project was not ambitious enough already, each volume will follow the same outline. For example, chapter 1 in each book will address the Spirit’s role through the lens of the volume’s unique theme, chapter 2 in each book will address the role of Christ, and so on.

What the reader will encounter in this, the first volume, can be most aptly described as a non-exhaustive, conscientiously protestant, pneumocentric, dogmatic account of the church according to its priestly vocation and its catholic scope. Insofar as its approach is dogmatic, its goal is not to advocate for a specific form of polity or liturgical life, but rather “to speak of the church and its life in a way that seeks to reflect on its place theologically within the broader account of God and God’s ways with the world” (p. xx). What this means, then, is that Gregg’s focus is the “what” of the church, rather than the “how”. As such, the subject matter is not ecclesiology in vacuum, but rather ecclesiology as a derivative doctrine that is intersected and shaped by other central doctrinal loci. Moreover, in his dogmatic approach Greggs is forthright about his own ecclesial commitments (Methodist), even as he draws extensively on thinkers from other traditions (most centrally, Karl Barth).

Greggs lays all of this out at length in the preface, before turning in the first four chapters to explain how the church’s ontology must be understood in light of the fact that it is established in space-time by the Spirit as a particularization God’s universal reconciling work in Christ (p. 21). It is in these chapters that he introduces the key themes and frameworks that recur throughout the rest of the book. Greggs paints a complex and dogmatically thick picture, so it is impossible to do justice to all the contours of his account in a brief review. However, of particular note are his emphases on Christ’s sole priesthood, the provisional and instrumental nature of the church as it participates in Christ’s priestly work, and the manner in which the church’s priestly vocation orders it both internally and in its outward orientation toward the world.

The following chapters unfold Greggs’ account of the key aspects of the church’s life as they are graciously caught up in Christ’s priesthood by the Spirit for the sake of the world.  In addition to the expected chapters on baptism, holy communion, prayer, and the congregation, there are also chapters on thanksgiving and praise, sanctification, and the communion of saints. While Greggs does at times touch on the “how” of these features of the church’s life, he generally disciplines himself to outlining what their import and dogmatic substance in light of the emphases noted above.

To conclude the book, and as a sort of bookend to the first four chapters on the church’s divine origin and ontology, the final two chapters focus on love and priestly catholicity. For Greggs, love is the feature of the church “which corresponds most closely to the priestly life” (p. 403), and as such, many of the aspects of the church he has already addressed are summarized and encapsulated here. The final chapter, then, makes the case that priestly catholicity locates the intensity of the church’s identity at its boundaries insofar as catholicity is rooted in Christ’s universal work of reconciliation and priestliness is, at its root, participation in Christ’s being for the other. A concluding coda serves to remind the reader that, although ecclesiology is basic in the order of knowing, it is, in the order of being, a derivative doctrine that must always be understood as having its roots in the immanent life of the Trinity.

One of the central strengths of Dogmatic Ecclesiology Volume 1 is its ability to accomplish two tasks simultaneously that are often played against each: namely, he offers a rich dogmatic account of the church as a missional church. In other words, while most work on ecclesiology tends to focus on how to be the church (or, to Greggs’ mind, worse: how to do church), Greggs takes the “how” to be simultaneously derivative of what the church is and in service to the church’s mission. Thus, the “how” of polity, liturgical life, and even the sacraments (in the chapter on baptism, Greggs argues against the usefulness of “sacrament” as a genus) must be qualified by and subordinate to the church’s origin and goal. Insofar as the church’s priestly identity subsists in Christ’s sole priesthood and, in Christ, is ordered in service to the other, the “how” of church must be indexed to these realities.

This is not to say that Greggs remains agnostic on the “how” in all places. For instance, he advocates for a thoroughly—although ecumenically qualified—memorialist understanding of the eucharist. However, he almost completely avers from addressing questions of polity, and advocates for the semiotic import of retaining both the practices of infant and believer baptism. Even in these instances, though, he argues cogently from the framework he has established. For example, on the matter of polity he is clearly concerned to, on the one hand, not detract from Christ’s sole priesthood by advocating for a separate essential hierarchy in the church. On the other hand, he is keen to avoid allowing a focus on the clergy-laity distinction to subvert the church-world distinction (to be clear, for Greggs, the church is separate for the world rather than from the world).

Given that this is the first of three volumes, it would be unwise to take issue with what might at present be seen as an omission, oversight, or one-sided account. Indeed, even with all three volumes in view, Greggs is explicit that his goal is not to offer a comprehensive account of the church. My primary critical comment, then, pertains to form more than content and is, as such, quite minor. In the opening section, “How to Read This Book”, Greggs eschews “reductive modes of deductive reasoning” in favor of what he describes as “theological wavelike movements” (pp. xxiv–xxv). This approach is often very effective. However, inherent to these wavelike movements is a repetition that can at times become tedious, especially when it is paired with Greggs’ propensity for long, highly qualified sentences and complex formulations. As such, there are points when the waves threaten to overwhelm the reader rather than carry her along toward the argument’s conclusion.

Ultimately, though, this should and undoubtedly will be essential reading for all those with a vested interest in ecclesiology, and especially those who are keen to understand its doctrinal location and interrelations. The dogmatic approach is both refreshing and compelling, capturing one’s theological imagination in a way that texts on the church often fail to do. Moreover, it is a dogmatic account that is also thoroughly and deeply conversant with Scripture throughout. As disenchantment with the institutional church continues to grow in the global West, Greggs offers a clarion call for Christians to ground afresh their hope for the church in the God who establishes it in Christ by the Spirit. In his concluding coda, he expresses his hope that the book will be taken as a “partial attempt at a faithful, hopeful, and (most of all) loving dogmatic account of the life of the church” (p. 455, emphasis original). To the mind of this reviewer, this is both a fair description of the book and central to what makes it so compelling. 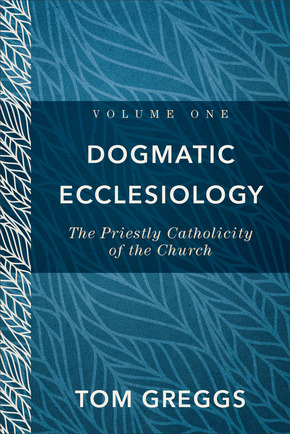