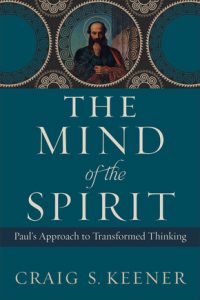 Craig S. Keener (PhD, Duke University), F. M. and Ada Thompson Professor of Biblical Studies at Asbury Theological Seminary, is one of the most widely read and respected New Testament scholars today.  He has continually published a number of important commentaries, books and essays, particularly concerning the study of the Holy Spirit – these include Gift and Giver (Baker Academic, 2001), Miracles (Baker Academic, 2011), Spirit Hermeneutics (Eerdmans, 2016), Between History and Spirit (Wipf and Stock, 2020) and, not least, his magnum opus four-volume exegetical commentary on Acts (Baker Academic, 2012-2015).  Keener’s The Mind of the Spirit is another academic accomplishment pertaining to the study of the Holy Spirit, with special reference to Paul’s understanding of the transformed human mind.  The main aim of the book is to use the concept of mind – in particular, the mind transformed by and in Christ – found in the Pauline passages to explicate how believers’ righteousness (in terms of one’s status or relationship with God) and/or moral transformation actually take place in the life of believers (pp. xv-xvi).

Chapter 1 explores Paul’s argument concerning the corrupted pagan mind in Romans 1:18-32.  Despite ancient philosophers’ repetitive call for rational mastery over passions, according to Keener, the supposedly wise pagan mind became subject to passions, corrupting nature’s evidence for God, rejecting the knowledge of God, and misconstruing reality, particularly human purpose and identity (pp. xvi, 1, 28-29); as a result, the Gentiles were given to idolatry and sexual immorality.  However, for Paul even the Jewish mind enlightened with the Torah without the Spirit eventually remains the mind of the flesh – Keener dwells on this topic further in chapter 3.  Chapter 2 discusses “the mind of faith” (6:11) or “the new way of thinking in Christ,” which comes from one’s new identity in Christ.  For Keener, Rom. 6 consists of two elements, namely, “indicative” and “imperative.”  The indicative element is “Christ’s death and resurrection, historically accomplished events” or “the new reality” that needs to be embraced with faith or to be “reckoned” with “(6:11: ὑμεῖς λογίζεσθε ἑαυτούς; ‘reckon yourselves’ – a cognitive action)” (pp. 31, 32, 44, 45, 53).  The imperative element invites the believers who have been righted with God through faith to more fully share and live out God’s perspective on their union with Christ.  Chapter 3, the longest chapter of the book, revisits the topic of the fallen mind and explores “life under the law without life in Christ” in Rom. 7:15-25 (p. 56).  Keener’s basic assumption is that Rom. 7:7-25 is not Paul’s current experience as a Christian but rather “Paul’s graphic dramatization of life under the law” (p. 112).  This passage thus describes “the more knowledgeable Jewish mind” or “the religious mind informed by God’s righteous requirements,” in contrast to the pagan mind in Rom. 1:18-32 (p. xvi).  This religious mind enlightened by the law is “all the more frustrated by passions, because it knows right from wrong yet is unable to silence passion” (p. xvi).

Chapter 4 deals with “the mind of the flesh” (Rom. 8:5-7), juxtaposed with “the mind of the flesh” in chapter 3.  As opposed to “the mind of the flesh” that is subject to passions, the mind of the Spirit – that is, the new way of thinking in Christ – is able to fulfill God’s will because this mind is guided, motivated and empowered by God’s Spirit that now dwells in believers.  The frame of mind involving the Spirit is characterized by life and peace.  This peace can refer to both the individual tranquil mind and to communal tranquility (pp. 135-141).  Chapter 5 continues with a similar theme, “a renewed mind,” in Rom. 12:1-3 in which Paul exhorts his hearers to renew their minds, “according to the standards of the coming age instead of the present one,” so that “[s]uch a mind leads one to devote one’s individual body to the service of the larger body of Christ” (xvi).  Chapter 6 explores “the mind of Christ,” (1. Cor. 2:15-16; 2 Cor. 3:18) that sheds light on how “the indwelling of God’s Spirit shares with the spiritually mature…a measure of God’s own wisdom” and “a foretaste of eschatological reality” (xvi).  Keener’s basic claim is that “true wisdom is found in the cross,” and “[a]n increasingly fuller understanding of the character of Christ crucified could increasingly transform [one’s] character, conforming [him or her] to Christ’s glorious image” (p. 216).  Chapter 7 briefly touches on the cognitive themes in Philippians: 1) divine peace guards the minds casting their worries to God (4:6-8); 2) a Christlike mind leads to serving one another (2:5); and, lastly, 3) those of citizens of heaven look to the matters of the heavenly, not of the earthly.  The eighth and final chapter carries on the last theme of Philippians, “the heavenly mind,” with special reference to Col. 3:2.  As opposed to the abstract and transcendent nature of heaven for ancient philosophers, the heavenly focus is clearly the exalted Christ for Christians.  Contemplating Christ will result in Christlike character and daily living in accordance with his character.

Unquestionably, the book is well-researched and compelling, possibly paving a new path in Pauline studies.  The Mind of Paul is unique and special in its contribution to Pauline anthropology, for no other scholars have yet given extensive attention to Paul’s view of the mind, as Keener does, especially against the backdrop of a wide selection of ancient sources.  Consulting with a plethora of Greek, Roman and Jewish sources, on the one hand, enables readers to delve deeper into the logic of Paul’s argument concerning the notion of mind, in comparison with other ancient philosophical ideas.  On the other hand, Keener successfully shows Paul’s distinctive view of the nature of the human mind, in contrast to the ancient philosophers’ perception of the human mind.

His detailed exegetical and theological reflection offers many practical (e.g., pastoral and psychological) insights into the human mind according to Paul.  Just as Keener himself predicted in his postscript, the book will “challenge the [socially constructed] common divide in many Christian circles between emotional religion (related to US frontier revivals and earlier mystics) and intellectual religion (historically related to academic training)” (p. 257).  Keener’s attempt to “surmount such historically and socially formed forced choices” (p. 258), despite some foreseeable disagreements and controversies related to the issue, will awake a responsive chord in the hearts of those who are serious about the call to love another (Rom. 13:8-10) despite the differences on secondary maters (14:1-23).

Overall, Keener has written another helpful and informative book concerning the study of the Holy Spirit, with his special reference to key Pauline passages.  With his exegetical, charismatic, multidisciplinary and pastoral concerns seen throughout the book, church and academy alike will certainly benefit from the book.  I highly recommend this book for students with a particular interest in the role of the Holy Spirit in the Christian mind. 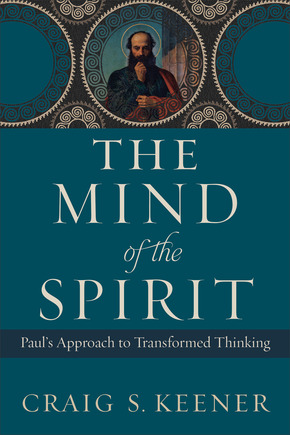