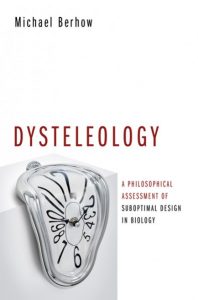 “Dysteleology” is a term invented by Ernst Haeckel (1834-1919) to describe the apparent suboptimal design and lack of function of biological order. Colloquially known as the “problem of bad design”, dysteleology has long been a central counterargument to the argument that biology was intentionally created by an omnipotent and perfectly good Creator. In the book, Dysteleology, philosopher Michael Berhow approaches the problem by contrasting theistic evolutionist Francisco J. Ayala’s dysteleological argument with Intelligent Design (ID) proponent William A. Dembski’s thought. The primary goal of the book is to show that dysteleology, as formulated by Ayala, fails as a counterargument against Intelligent Design. A secondary goal is to show that the project of theodicy requires a teleological worldview, and that Intelligent Design provides better support for such a worldview than Ayala’s brand of theistic evolutionism. Thus, Berhow concludes ambitiously that “If philosophers and theologians hope to develop a coherent evolutionary theodicy . . . they must appreciate the insights offered by ID advocates like Dembski” (p. 139).

Berhow’s critique of Ayala’s theodicy follows familiar lines of argument from the literature. Ayala argues that a non-directed process of evolution absolves the Creator of blame for the suboptimality of biology, but ID, in arguing that evolutionary mechanisms cannot explain biological adaptations, lays the blame on God. This, according to Ayala, makes Darwinian evolution the preferable option for theological reasons. Many, including Dembski and many theistic evolutionists, have remarked that this does not actually solve the problem, as God would still be responsible for the evolutionary process, and thus indirectly responsible for bad design. Berhow follows this view, and acknowledges that there are more sophisticated evolutionary theodicies (p. 127), but he does not engage with these or the literature in depth, as these are outside the narrow aim of the book. This is a shame: While Ayala is an eminent scientist and an esteemed participant of the science and theology conversation, his brief and popular-level books do not contain all the relevant arguments.

In addition, Berhow also argues that Dembski’s design argument can accommodate all the good features of Ayala’s evolutionary theodicy, since Dembski and other ID proponents also allow for chance and necessity to have a real explanatory role in biology, as well as design. Here Berhow’s discussion sidesteps some of the more theologically difficult parts of the ID hypothesis, such as Michael J. Behe’s claim that the malarial parasite is exquisitely designed, and cannot be explained by such undirected processes. So, it seems that at least in some cases, proponents of ID do indeed need to appeal to direct divine or demonic design as the explanation, in contrast to theistic evolutionists following Ayala. However, it is indeed unclear whether Ayala’s theodicy could succeed in removing the Creator’s responsibility even as the indirect cause of such features. The notions of moral and causal responsibility that this particular evolutionary theodicy depends on are murky and in need of much more work before they could be credible. This is not to say, however, that other evolutionary theodicies could not be successful.

On the theological side, Berhow follows Dembski and other ID proponents in arguing that the detection of design does not require the evaluation of the optimality of that design. After all, we are routinely able to detect imperfect design. Instead, Berhow argues that dysteleology can be analysed as a separate theological question, and in this context it can be shown that theism does not require optimal design. Here engagement with the critical literature on Dembski’s argument would have been needed to make the argument more convincing. Both philosophical analysis and empirical studies seem to show that the detection of design both in the human context and in nature is influenced by our background beliefs, and this holds true for both critics and defenders of design arguments. This means that it may not be possible to separate theological and philosophical questions from the design argument as neatly as Dembski claims. There is a vast literature of design arguments, as well as critical responses to Dembski, which Berhow does not engage with in depth in the book.

One of Dembski’s core theological arguments against theistic evolutionism has been the alleged fideism of theistic evolution. Berhow similarly argues that “the fundamental difference between Ayala and Dembski, then, is over the detectability of design” (p. 93), and Berhow presents no critique against Dembski’s quoted statement that “within theistic evolution, God is a master of stealth who constantly eludes our best efforts to detect him empirically” (p. 93). As Berhow notes, for Ayala, the scientific undetectability of design is no problem, because Ayala rejects scientism. But Berhow quickly dismisses this as irrelevant, since proponents of ID also wish to reject scientism (p. 108). Berhow then goes on to argue that because Dembski provides evidence supporting a teleological understanding of nature, in which mind is fundamental, Dembski’s framework therefore also provides a better foundation for theodicy than Ayala’s theistic evolutionism. Nevertheless, it seems that the influence of scientism does distort this debate. Discussion of the further literature beyond Ayala’s works would have helped probe the relationship of faith and reason deeper. The scientific undetectability of design because of methodological naturalism would not imply that purpose is undetectable in nature overall, or that the theistic evolutionist cannot have other reasons for belief in a teleological worldview. Indeed, many of the best defences of the contemporary theistic arguments, such as the fine-tuning design argument and the cosmological argument, have been written by theistic evolutionists. Moreover, the relationship of faith and reason is a complex matter, not reducible to a binary alternative between either evidentialist support for intelligent design, or a blind leap of faith for theistic evolutionism.

The book’s narrow focus on Ayala’s dysteleological argument against ID limits the book’s helpfulness for the scholarly debate. There is a vast literature on evolutionary theodicy, dysteleology, Intelligent Design, Dembski’s design argument, theistic evolution, faith and reason, and so on, which is not taken into account here in much depth in order to make conclusions relevant for the broader discussion. The coherence of a teleological worldview does not rest on ID, nor could ID alone provide sufficient support for it even in principle, since proponents of ID acknowledge that their design argument does not demonstrate the identity of the designer. Nevertheless, Dysteleology will be interesting for followers of the debate over Intelligent Design. Whereas the debate is often acrimonious, Berhow writes refreshingly cordially and clearly intends to be fair to all sides. The book is lucidly written, and Berhow capably corrects many misunderstandings of both Ayala’s and Dembski’s arguments. 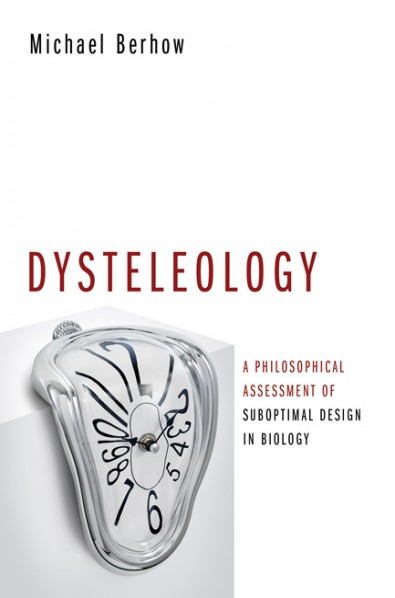