Benjamin Merkle currently serves as professor of New Testament and Greek at Southeastern Baptist Theological Seminary in Wake Forest, NC, a position he has held since 2008. He also serves as the editor of the Southeastern Theological Review and series editor of the 40 Questions series.  In the area of biblical Greek, Merkle has co-authored Beginning with New Testament Greek (B&H, 2020), an elementary Greek grammar, Going Deeper with New Testament Greek, Revised Edition (B&H, 2020), an intermediate Greek grammar, and Greek for Life (Baker, 2017), a guide for refreshing Greek.

In Exegetical Gems, Merkle offers motivation for students learning or re-learning biblical Greek. Covering various debated passages in scripture, he provides thirty-five ‘exegetical gems,’ which are “substantial insights from NT passages gained by a proper knowledge and use of Greek” (vii). This volume also provides a brief review of Greek syntax normally covered in a second semester/year Greek course.  Each chapter covers a different area of Greek syntax and is broken into three sections: (1) an introduction which presents a verse or passage to be interpreted; (2) an overview of the point of Greek syntax, framed towards interpreting the passage, and (3) an interpretation of the given passage utilizing the relevant syntactical concept and offering a solution to the exegetical question.

Merkle presents the areas of Greek syntax in the same order as his intermediate grammar Going Deeper with New Testament Greek. The first two chapters cover changes in Greek during the Koine period and textual criticism. Chapters three through eleven cover nouns, adjectives, and the article (as well as Colwell’s Canon and the Granville Sharp rule). Verbs, participles, and infinitives are then covered in chapters twelve through twenty-four. Pronouns, prepositions, adverbs, conjunctions, and particles are covered in chapters twenty-five through twenty-eight. The book concludes by covering an assortment of topics, including conditional sentences (chapter 29), figures of speech (chapter 30), context (chapter 31), word studies (chapter 32), exegetical fallacies (chapter 33), discourse analysis (chapter 34), and diagramming (chapter 35).

The purpose of Exegetical Gems is to help “students of New Testament Greek prosper and ultimately succeed in using Greek” (vii). Merkle recognizes that students do not persevere in the study of Greek because they do not see it as valuable. Although he acknowledges that “knowledge of NT Greek does not answer every exegetical or theological question” (vii), Merkle does assert that a proper understanding of Greek makes a significant difference in the interpretation of debated passages. His goal in this book, then, is to provide an accessible demonstration of the value knowing Greek adds to the student of scripture.

One of the strengths of this volume that best aids its purpose is its brevity. The student unsure of the value of a subject will not invest too much time into learning it, so Merkle kept this volume short to overcome the inertia inherent in starting a massive book. Each chapter is only three to five pages long, and syntactical concepts are helpfully bulleted for clarity. A drawback to this brevity, however, is that helpful explanation must be cut from the chapters, potentially confusing the unfamiliar reader.  Merkle seeks to combat this drawback by thoroughly footnoting the chapters to provide resources for further study. However, the brevity required by the purpose of Exegetical Gems precludes it from being a stand-alone introduction, and Merkle rightly notes that it should be read by someone already familiar with Greek syntax or alongside a more thorough textbook (ix).

Throughout the book, Merkle promotes understanding Greek as one would any language and combats common abuses of interpretation. He consistently affirms the important role context plays in understanding language, noting that the interpretation of a passage does not hang on one syntactical factor but is informed by the broader syntactical and theological context. He also asserts that each syntactical category does not represent what that part of speech means but represents one way a speaker/writer can use that part of speech given the lexical, grammatical, and contextual factors (cf. pages 63, 72, and 94). In addition, Merkle notes incorrect interpretations people have made when they do not pay attention to the influence of a word’s meaning (54-56), the specific genre (85-87), or the stylistic preference of an author (153-155). The reader of Exegetical Gems, then, should come away understanding Greek as an interconnected system of language and not as a special code to reveal hidden meaning.

Another way Merkle helps students learn to apply Greek is through the inclusion of multiple viewpoints in the interpretation sections. As he interprets the passages, Merkle does not simply present his own position as if it were the only possibility, but he lists other positions on any given issues and includes evidence for the viability of the various positions. This inclusion gives the student practice thinking through the various ways the language can be interpreted and allows the student to weigh various options and come to their own opinion.

While it is a thorough review of Greek syntax, there are aspects missing from Exegetical Gems. One grammatical topic missing is a discussion of verbal voice. In his intermediate grammar, Merkle devotes a half chapter to a discussion of the voice system of Greek verbs. However, this is not a topic that he chose to cover in Exegetical Gems. The nuance of the middle voice makes it ideal to be included among the topics covered in this book, especially since the middle voice is not used in English. Merkle also does not address current issues of debate in Greek study. He will sometimes include footnote references to different views on a topic but does not inform the reader that this issue, such as aspect, is currently being debated by scholars. It is possible that Merkle did not want to bog a student down with these issues, but he could have strengthened this volume by noting current debates.

Its brief nature and exegetical depth make Exegetical Gems an ideal volume for a student struggling with motivation to learn Greek or a former Greek student wanting to dive back into Greek. However, once the student is properly motivated and situated in the Greek language, the benefit of the volume is limited.  Merkle does helpfully summarize the syntactical categories, but standard reference grammars do the same thing in more detail. Ultimately Exegetical Gems accomplishes the goal Merkle set for it, and it is a helpful tool that fills a pedagogical role not filled by other books. Any person wanting to learn or re-learn Greek would do well to read through this book. 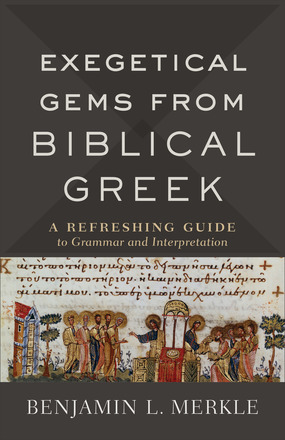