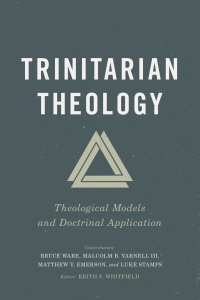 Trinitarian Theology presents three theological models from scholars of the Southern Baptist Convention, the largest U.S. Protestant denomination. The editor Keith S. Whitfield is associate professor of Christian theology at Southeastern Baptist Theological Seminary. Between Whitfield’s introduction and conclusion, six chapters follow a multi-perspectives pattern: opening arguments lead to responsive rebuttals. The authors provide a general defense of their Trinitarian models and specifically address the question of eternal relational authority and submission (ERAS). First, Bruce Ware, author of Father, Son, and Holy Spirit (2005) and editor of One God in Three Persons (2015), presents ERAS as biblically necessary and historically defensible. Second, Malcolm B. Yarnell, author of God the Trinity (2016), conditions ERAS theologically. Third, Matthew Y. Emerson, Christ and the New Creation (2013) and The Story of Scripture (2017), and Luke Stamps, Thy Will Be Done (to be published by Fortress Press) criticize ERAS as contradicting the pro-Nicene tradition.

These models differ regarding their grounding. Ware surveys Scripture guided by Hebrews 1-2 to ground ERAS directly, while also providing historical and philosophical support. He states that “since the Bible is our sole ultimate and only absolute authority for knowing rightly who God is, we must listen carefully to how it speaks” before looking to tradition (p. 28). Ware concludes with J. I. Packer’s defense of ERAS in Knowing God (p. 60). Scripture teaches the Son’s eternal obedience, so we must join the tradition in so doing.

Next, Yarnell exalts theology proper as Scripture’s arbiter for Trinitarian theology: “Revelation . . . provides the basis for granting the doctrine of God methodological priority” (p. 64). Upon this basis, Yarnell affirms with ERAS that “authority, like the eternal generation of the One, proceeds from the Father to the Son” (p. 153). However, given divine self-existence and simplicity, the Trinity must have one authority and power.

Lastly, Emerson and Stamps affirm a “thick biblicism,” affirming Scripture’s rule while emphasizing tradition. They primarily allege that “the traditional doctrine,” in requiring one willing faculty, contradicts ERAS (p. 110). They describe the pro-Nicene tradition using parallel groupings: (1) nature and persons, (2) will and subsistent modes, and (3) inseparable operations and appropriations (pp. 108-127). This tradition serves as a hermeneutical tool: it is “time-tested conceptual language by which we might defend and explicate all that Scripture teaches about God” (p. 128). ERAS fails as a lens and contradicts this tradition.

I will now identify a main positive from each. Positively, Ware provides clarification with his tradition-informed, Scripture-focused argument. Significantly, Ware counters the claim that he ever rejected eternal generation: “I have never in the past said that the doctrine of eternal generation is wrong, but I have questioned whether Scripture teaches it, and frankly I’ve puzzled over just what it means” (p. 50-51, n. 24). Ware seems to have held a fairly common, conservative position: the eternal generation analogy communicates the correct, biblical understanding of the Father-Son relationship, even if the analogy’s exact nature and direct biblical basis are uncertain. Though ERAS’s opponents will desire more, Ware’s chapters provide elucidation.

Yarnell’s chapters situate his position within the contemporary milieu. Appealing to Stanley Grenz’s connotative-denotative distinction, Yarnell locates himself with Scott Swain on the connotative side—the names Father and Son convey their identity “to some extent”—over against Grenz’s denotative position—in which names only differentiate persons (p. 80). However, Yarnell also contrasts himself with Swain, who cautions against applying the Trinity sociologically. Leaning on Dietrich Bonhoeffer, Yarnell supports the Trinity’s sociological relevance (pp. 86-88). Yarnell adequately converses with contemporary literature.

Emerson and Stamps provide a helpful overview of Trinitarian method by faith seeking understanding. Anyone familiar with the theology of John Webster or the hermeneutics of Daniel Treier and Kevin Vanhoozer or the retrieval of Scott Swain and Michael Allen will quickly recognize this method. Emerson and Stamps explain the standard descriptors: Spirit-led, ecclesially located, exegetically grounded, canonically patterned, creedally ruled, and dogmatically guided (pp. 98-105). Their model helpfully represents these aspects of an unashamedly faith-filled, non-scientistic theology.

I will now seek to illuminate the contributors’ main negatives. While Ware’s chapters answer questions raised by opponents, Ware’s use of non-traditional language—without certain qualifications—will stimulate more questions. For example, Ware’s describing the persons as “accessing” their nature leads Emerson and Stamps to wonder about social trinitarian implications, though Ware clearly rejects social models (pp. 47-48, 159). Whereas social trinitarians define essence generically, Ware defines essence as identity: “Each divine person, in essence, possesses an equality of identity” (pp. 18-19, emphasis original). But Ware still leaves the impression of underemphasizing the “concrete-Unity-side” of the Trinitarian paradox. Ware avoids discussing the traditional view that the persons are subsistent relations who inter-dwell one another within the Unity. This silence makes “Trinity in Unity” seem secondary to “Unity in Trinity.” Ware could clarify by equilibrating his presentation of the pro-Nicene paradox, as represented in the Athanasian Creed: “Unity in Trinity, and the Trinity in Unity.”

Yarnell’s discussion lacks clear road marks at times, resulting in opacity. Much effort discerns Grenz’s denotative-connotative distinction within the flow of Yarnell’s presentation. This difficulty may have influenced Whitfield’s misplaced labeling of Emerson and Stamps’s position as connotative and Ware’s as denotative (p. 183). In Ware’s position, Father-Son connote authority-submission. Emerson and Stamps’ position is more denotative: the persons’ names “simply (though ineffably) communicate the relations of origin” (pp. 164-166), which only signify subsistent denotative ordering (p. 113). Yarnell could have better delineated his discussion.

Emerson and Stamps present the most significant issues. They lean on Stephen Holmes to argue that since the pro-Nicene tradition places the will with the Unity, the persons cannot will distinctly; however, this imposes a false binary. Lewis Ayres has shown that pro-Nicene representatives belie the assumption that “the one divine will is obviously opposed to there being three wills” (“‘As We Are One’: Thinking into the Mystery,” in Advancing Trinitarian Theology: Explorations in Constructive Dogmatics, ed. Oliver D. Crisp and Fred Sanders, Los Angeles Theology Conference [Grand Rapids: Zondervan, 2014], 94–113; 106). In this way, Emerson and Stamps mischaracterize the tradition, falling short of their method’s standard. Thomas H. McCall’s response to Holmes applies: “Even more historical sensitivity would help” (“Response to Stephen R. Holmes,” in Two Views on the Doctrine of The Trinity, ed. Jason S. Sexton, Counterpoints [Grand Rapids: Zondervan, 2013], 55–60; 59). This “tradition revisionism” strengthens Ware’s warning against allowing “tradition” ultimate control. Emerson and Stamps even acknowledge that Scripture presents the Son “as submitting unto the incarnation” (p. 164). Their assumed binary disallows their hearing what both Scripture and the pro-Nicene paradox teach: Unity in Trinity of wills, and Trinity in Unity of will.

Trinitarian Theology helpfully provides three theological models from Southern Baptists. The representatives show charity, recognizing wide agreement. Whitfield has commendably placed these models in conversation and contributed to contemporary theology. Students will follow the arguments more easily with an understanding of how 20th century Trinitarian discussions connect to this forty-year evangelical debate over ERAS. This volume provides students with an up-to-date defense of ERAS by Ware, a relevant conditioning of ERAS by Yarnell, and a presentation of non-naturalistic method in Emerson and Stamps. Students should focus on the scholars’ biblical claims, specifically focusing on whether Scripture requires or undermines speaking of distinct wills and authority within the one will and authority of God. 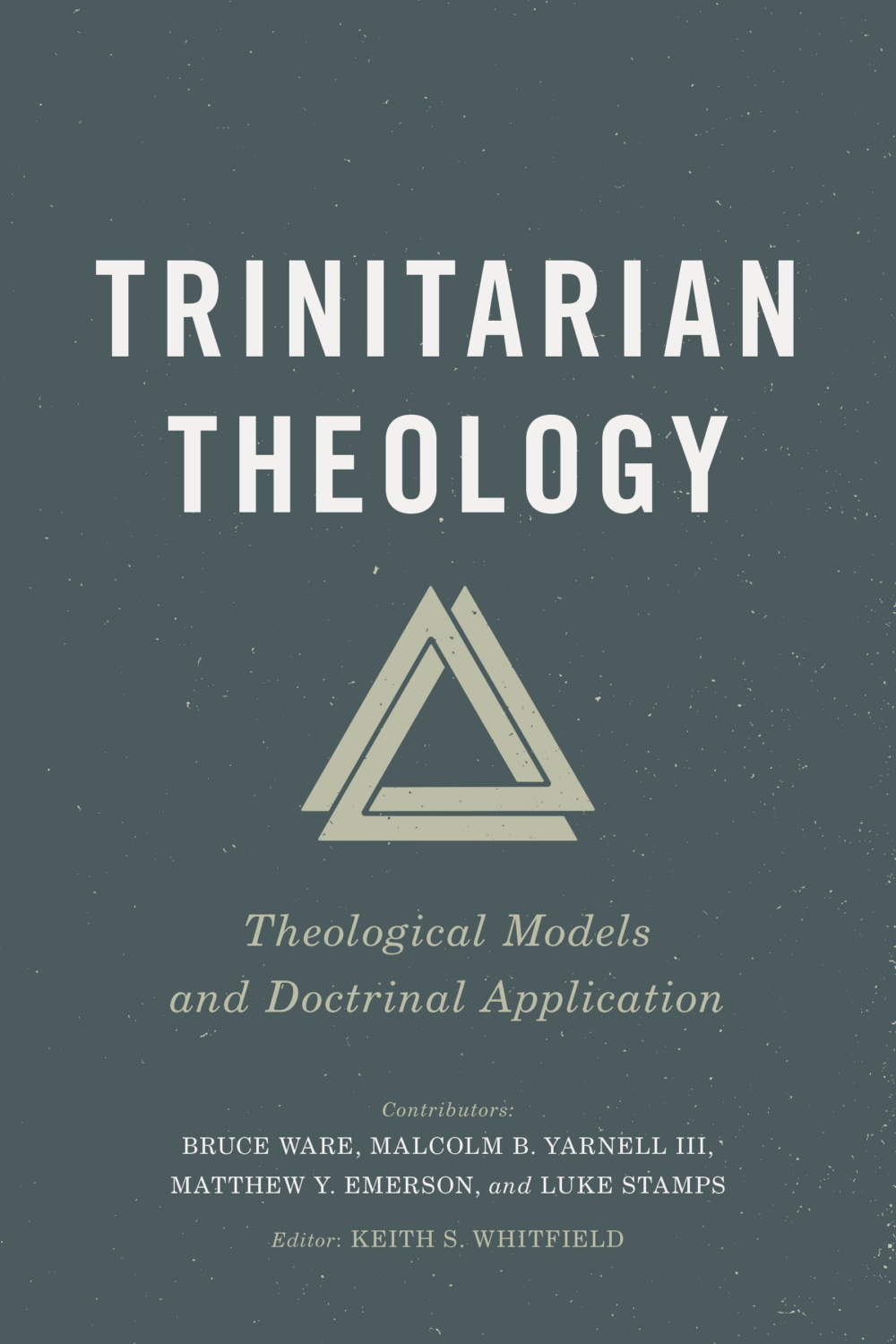