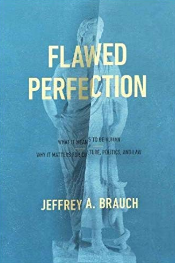 Theological anthropology is a thriving area of study. Part of the reason for this growth is due to the growing studies from the brain sciences and psychology, which have and continue to raise interesting and thought-provoking implications for what it means to be human. Another reason for the growing interest in theological anthropology has to do with the growing tensions within the broader cultural conversation on what it means to be human. Jeffrey Brauch enters these discussions as a fresh voice. He argues that, at the heart of this conversation, to be human means that we are created with dignity, value, personal responsibility, but we are also marked the Fall—in other words, Flawed Perfection.

Flawed Perfection is not your typical book on theological anthropology, however. It is unusual, but I mean that positively. Brauch is not integrating classical theological anthropology with one of the sciences or re-branding it with a particular philosophy. Brauch, also, is not writing, primarily, with the academic in mind. He writes with a broad audience in view. As a legal expert himself, he brings his legal expertise to the question of what it means to be human. Yet, his reflections are shaped and formed by his meta-perspective that we are created in the image and likeness of God, and we bear dignity, value, and personal responsibility. Yet he balances all of his reflections with the reality that humans are creatures who have fallen into corruption.

What makes Flawed Perfection unique is Brauch’s facility with concrete legal cases, which are always brought back to a larger theological frame. After drawing our minds to the theological principles that guide and inform our thinking about these legal scenarios, Brauch rarely comes to hard and fast conclusions, but rather he raises questions to ponder and guiding principles to think more clearly about humans in light of culture, politics, and law. You might think of his objective in the book as a guide for thinking Christianly about the human in our present dialectic rather than offering an authoritarian answer book sent down from heaven. In this way, his approach is deeply earthy and practical.

Along these lines, Brauch avoids human portraits that are unrealistic. Brauch avoids a fatalistic and undignified view of humanity by upholding the traditional and biblical characteristic that humans are personally responsible for their actions. Take the specific legal examples he offers in chapter 9 on “Environmental Influence Defenses”. In this chapter, Brauch explores the deeply complicated issues surrounding personal responsibility in legal discourse expressed in concrete legal cases. Several questions still deserving our reflection are raised: 1) Is there a principled way to maintain personal responsibility yet recognize differing levels of culpability for specific moral actions? 2) Should the penal consequences for specific actions vary according to one’s upbringing, chemical imbalance, and lack of awareness regarding the severity of the act? These questions are raised in the context of legal discussions surrounding Bazelon’s ‘Durham rule for insanity’ and ‘The M’Naghten Rule’. The first rule states that a person is found not guilty for action committed by reason of insanity, i.e., if the unlawful act is a product of mental disease, then one should not be found guilty. The latter rule was an earlier rule applied in western legal history, and it states that persons are held accountable for their actions based on a cognitive test of what they knew and what they did not. On the M’Naghten Rule, individual humans are punished for their actions based not only on the act itself but on their intentions in the act. One of these rules is helpful and, arguably, upholds personal responsibility (M’Naghten Rule), but the other is consistent with a physicalist determinist view of the world that eliminates personal responsibility (Durham rule of insanity). Brauch recognizes the biblically guided principle that environment (e.g., social, biological, familial) influences our behavior, but it does not cause our behavior. He concludes rather judiciously that in order to maintain personal responsibility and the dignity of humans, legal decisions should be made not on the basis of excusing criminal responsibility or changing legal standards, but on the basis of one’s intentionality in the act and judging the penal consequences for the actions on environmental influences. Giving credence to environmental influences signifies his considered effort to understand humans in our legal situation as humans marked by the Fall. Chapter 9 gives the reader one example of the rich and sophisticated reflections exemplified throughout Flawed Perfection.

There are many other insightfully informed pieces of wisdom worth considering regarding the relationship between law, natural law, and human nature along with the implications our laws have for how we understand human nature. In my estimation, Flawed Perfection, while unusual, is readable and worthwhile for a wide readership. While it is not technically an academic work, it is deeply considered, based on careful research, and immensely practical. It would serve as a helpful supplementary text in a variety of courses including courses on theological anthropology and courses that cover topics at the intersection of law, philosophy, and theology. Finally, it would serve as a useful resource for a book study for advanced laymen or simply for the purposes of one’s own intellectual development.