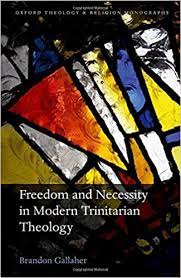 Brandon Gallaher is senior lecturer at the University of Exeter, specializing in twentieth century Orthodox theology and modern theology more broadly. The breadth of Gallaher’s interests are on display in this fine monograph. Freedom and Necessity in Modern Trinitarian Theology dialogues with three generative modern theologians each representing a distinct tradition: Sergei Bulgakov, Karl Barth, and Hans Urs von Balthasar. The book is organized round a set of questions related to the form of modality applicable to God’s immanent and transitive acts, but these particular issues offer an entryway into some of the most pressing debates in contemporary theology related to divine aseity, divine freedom, the reliability of our knowledge of God, and the relation between God in Godself and God’s acts in the world.

Gallaher begins outlining three sorts of freedom and three corresponding forms of necessity. These versions of freedom and necessity provide an interpretive grid according to which his three dialogue partners are interpreted and then critically assessed and evaluated. In view of space constraints, I will move directly to summarize the dogmatic conclusions for which Gallaher advocates throughout the book. While some limitations arise in leaping straight to Gallaher’s conclusions and moving briskly past his learned interpretations, his account of each dialogue partner is shaped at every turn by his constructive aims.

Gallaher worries that a monistic collapse obtains if the form of necessity pertaining to Godself likewise applies to God’s decision to create and redeem. He affirms therefore that God could have refrained from creating without being essentially different than God is. However, Gallaher also worries that to straightforwardly affirm the contingency of creation might disconnect theology and economy, introducing an unreliability into God’s revelation and undermining the integrity of God’s loving action in the world. He therefore argues that once God has contingently decided to create, creation becomes necessary for God. This necessity is described robustly as an “internal reality for God as God” (p. 221). I suspect statements such as this aim to rule out that creation is merely hypothetically, rather than absolutely necessary (hypothetical necessity implies that creation is necessary insofar as God has willed to create, but because creation is necessary only on the hypothesis that God has freely willed it, rather than being necessary for God’s ontological completion or fulfilment, creation is not and never becomes absolutely necessary). His three dialogue partners are evaluated by their ability to secure these dogmatic affirmations. In radically truncated summary, Gallaher thinks Bulgakov and Barth fail to secure God’s genuine freedom to have refrained from creating, whereas Balthasar fails to consistently affirm that creation becomes necessary for God.

To concretely express these largely formal dogmatic affirmations, Gallaher engages in some audacious trinitarian speculation, positing that God’s ontological completion ‘awaits’ the human act of Jesus of Nazareth electing the Father as his Father which constitutes the divine being. In order to secure the genuineness of God’s dependence upon Jesus Christ—and therefore God’s dependence upon creation since Jesus is a creature and a representative of creation—Gallaher suggests that the Father draws a veil over divine knowledge of what Jesus will decide. There is genuine uncertainty both in God’s knowledge and in God’s ontological self-determination until Jesus has determined the divine being. These constructive proposals are well adapted to secure what Gallaher thinks an account of the relation between theology and economy and divine freedom and necessity needs to affirm but nonetheless, questions remain.

For example, Gallaher is invested in a dialectical approach in which seemingly contradictory claims are set alongside one another without clear harmonization. This strategy has an important pedigree in modern theology. However, as other reviewers like Tom McCall have noted, there is little control over what counts as a valid dialectical juxtaposition for Gallaher. At many points, Gallaher faults his dialogue partners for remaining merely at the level of “assertion” rather than offering a robust defense of the coherence of their views (pp. 88-9, 160, 229, 232). Yet one might think his own dialectical approach likewise resides at the level of mere assertion, in that he asserts two seemingly contradictory claims without demonstrating how they can be reconciled.

For example, one of Gallaher’s central claims is that while God needs the world this does not undermine divine aseity because this need is rooted not in external coercion but a free divine act of love: “This need . . . is not for God Himself (his self-development) but for love of the world” (p. 222; see also p. 240). Yet if God by a divine act of will decides to make the world and the free choices of a creature or creatures necessary to the actualization of the divine being—as Gallaher affirms—then it becomes the case that God depends upon something outside Godself for divine self-development. This means that something external to God comes to exercise a coercive determination upon God, since it is not wholly “up to God” who God will be essentially. Furthermore, Gallaher affirms that God wills “creation to enrich Him[self] as an additional gift” (p. 222) and that “God necessarily must ecstatically love beyond Himself to be Himself as love” (p. 184). If creation enriches God, enhancing divine love, then one might think either God becomes more perfect than God would be without the world, or God’s love for creation is disconnected or at a distance from God’s being. This latter claim is something which all three of Gallaher’s dialogue partners and Gallaher himself are keen to avoid. But in that case, for God to be the perfect God God is, God needs the world, not merely for the world’s sake but for the sake of God’s own perfection. This lacuna drives straight to the heart of Gallaher’s central claim that while God makes the world necessary for Godself, God need not have done so to be the God God is (pp. 22-3, 34-5, 88, 165). Either God’s love for the world adds nothing to who and what God is essentially, which Gallaher denies, or the world enhances God insofar as it enhances the actualization of God’s love. In that case, God needs the world for the sake of God’s own ontological perfection not merely for the sake of an altruistic love for the world. Unless this highly dialectical—i.e. seemingly contradictory—set of claims can be reconciled, there is a danger that Gallaher’s view implies against his intentions that God is free, only in that God could have been less perfect because less loving than God actually is in creating the world. This amounts, for those who affirm with Anselm, Barth, Balthasar, and many others, that God essentially is “that than which nothing greater can be conceived,” to a seemingly nonsensical claim that God could have willed to be worse than God is and therefore to have willed not to be God.

That I have pressed these matters is a testament to the erudition and creativity of Gallaher’s proposals. There are a host of merits to Gallaher’s work, including the way in which he situates each of his dialogue partners within post-Kantian idealism and the creativity and sensitivity of both his interpretations and his constructive theological arguments. It is invigorating to read a book whose theological proposals are this bold. The monograph eminently repays careful attention, offering a lasting contribution to central questions in contemporary systematic theology.