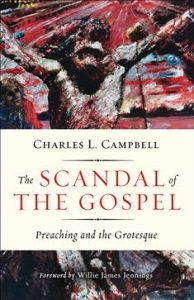 Painters have their colors and canvas, sculptors have their clay, and preachers have their words. And words are powerful. As the Bible so often indicates, Scripture has the power to build up and to tear down, and this is especially so in the ministry of preaching, as Charles L. Campbell discusses in his latest book, The Scandal of the Gospel: Preaching and the Grotesque. Campbell is James T. and Alice Mead Cleland Professor Emeritus of Homiletics at Duke Divinity School. He is a past president of the Academy of Homiletics, a highly sought-after lecturer, and he is well published in the field.  Most of the content for this latest book comes from his 2018 Lyman Beecher Lectures at Yale Divinity School; only the fourth chapter contains new material.

In the forward, Campbell explains that he is not seeking any consistency or system; rather, he says that he is “simply trying to make some homiletical connections between preaching and the grotesque” (p. xiv). This concept of the grotesque subsequently stands at the center of the book. The term is borrowed from the world of visual art, where it originally referred to paintings found in ancient Roman grottos, i.e. grotto-esque. These “murals presented unsettling, disorienting hybrids that transgressed accepted categories. They distorted what was considered ‘normal’ or ‘beautiful.’ They messed with accepted patterns. They were, as they came to be called, ‘grotesque’” (p. 6). This description encapsulates the homiletical vision that Campbell sets forth in these chapters, i.e. preaching that is unsettling, disorienting, that transgresses accepted categories and norms, that is “grotesque.”

In the first chapter Campbell considers how this concept of the grotesque fits with the scandal of the Gospel. Taking his cue from 1 Corinthians 1:23, he explains that the Gospel confronts with the destabilizing pairings of opposites: God-cross, life-death, repulsion-fascination, horror-hope. A God that is violently crucified on a cruel Roman cross is inherently “grotesque.” In chapter 2, Campbell explores how the grotesque is often weaponized in the act of preaching. Specifically, when one compares sociological and/or theological opponents with non-human objects, one is using the grotesque to dehumanize and minimize them in order to maintain one’s own particular understanding of order. In chapter 3, Campbell offers an alternative to this kind of weaponization by explaining how the grotesque creates preaching that is “open, protruding, irregular, secreting, multiple, and changing” (p. 55). Preaching that is grotesque welcomes input and insights from a variety of voices, and not merely biblical and theological ones. It is preaching that “becomes real when truth happens among the cacophony and incongruities of diverse voices and diverse lives” (p. 57). Finally, in chapter 4, Campbell imagines how the grotesque could be employed in preaching to address the environmental crisis.

Campbell’s application of the grotesque to the discipline of preaching is provocative to say the least because it stands in such stark contrast to the kind of preaching that is the focus of Campbell’s critiques. Sermons that offer simplistic principles for improving marriage, managing finances, or raising godly children attempt to “give people a nice focused nugget to carry home – not the shocking unresolved contradictions of the grotesque gospel” (p.11).  This kind of preaching is neat, clean, even idealistic. The problem, however, is that “when we rush to order, when we avoid the interval of the grotesque, our preaching may become shallow, unreal, cliched. We don’t go deep enough. We’re not honest enough. And we end up falsifying both the gospel and life itself – we end up imposing false patterns” (p. 12). Life is so often the opposite of the neat and clean categories we attempt to impose on it from the pulpit. It is complex and messy; it is “grotesque.” Campbell would have readers embrace these tensions rather than attempting to resolve them.

Though he rightly critiques this “humanistic” (his label) approach to preaching, the alternative that he proposes is inherently more so. Grotesque preaching is “shaped by the dynamic and open life of Jesus’ grotesque body. Grotesque preaching calls the church to be open to the world and calls the pulpit to be open to different bodies and new voices” (p. 56). It springs forth from the lived experiences of people rather than from the authoritative Word of God. What is glaringly absent from Campbell’s vision for preaching is how it relates to the principle of “Thus saith the Lord.” Christian preaching springs forth from the fact that God has spoken. The Apostle Paul instructed his protege Timothy to “Preach the Word” (2 Timothy 4.2). God has spoken; therefore, we speak. In other words, the purpose of Christian preaching is to exposit the declared Word, “giving the meaning so that the people could understand what was read” (Nehemiah 8.8). It is not merely to listen to people’s stories or to appreciate the diversities and complexities of the human experience.

In the final analysis, Campbell’s invitation for preachers to approach the complexities, difficulties, and tensions of life with greater compassion is a welcomed alternative to the idealistic naivete that characterizes most preaching today. That being said, his alternative is essentially void of the very resources that God has provided to address those complexities and difficulties. In other words, grotesque preaching, as Campbell envisions it, comes off merely as a way to exalt and platform human experiences over the Word of God. However, it is ultimately powerless as a homiletical method for proclaiming the inspired Word of the one true and living God. In my view, preachers would be better served by attending to the text of Holy Scripture, giving its meaning through systematic exposition, than by any clever attempts to be “grotesque.” 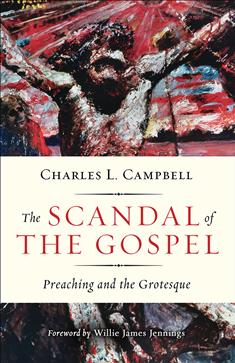