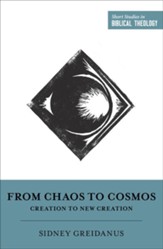 The author of From Chaos to Cosmos, Sidney Greidanus, retired from full-time teaching in 2004 after serving as a professor at Calvin College, Calvin Theological Seminary, and King’s College. Greidanus was also the pastor of two churches. One of his most popular publications prior to this book is Preaching Christ from the Old Testament (Eerdmans, 1999). From Chaos to Cosmos is one of nine books making up the Short Studies in Biblical Theology series published by Crossway.

Greidanus’s main purpose in writing this volume is to demonstrate the presence of a progression from chaos to order in the Bible. He tracks these themes from the first verses of Genesis to the last words of Revelation. The main difficulty in this effort is defining the word “chaos” in a way that does not mistakenly equate the chaotic waters of Genesis 1:2 with evil. After all, these waters were a part of God’s good creation. Although Greidanus recognizes that some authors avoid the word “chaos” because of its connotations of evil, he chooses to use this term in an attempt to redefine it. By the end of the text, he successfully clarifies his use of the term. However, there are many points early in the book that are unclear, notably whether Greidanus has confused the good chaos that existed as part of creation with the evil chaos that was a result of sin.

Greidanus’ first attempt to avoid this difficulty is to adopt a dictionary definition of chaos: the initial nothingness that preceded creation. This perfectly applies to the chaos that exited as part of God’s good creation. However, this is not the chaos that is addressed in the rest of the book. Within a few pages of providing this definition, Greidanus begins using the term to refer to the fallout from sin, without explaining that he has expanded on the initial definition. The result is two vastly different options for what is the opposite of chaos: does the book contrast chaos (meaning initial nothingness) with cosmos (meaning ordered creation) or does it oppose chaos (meaning the evil effects of sin such as pain and suffering) and cosmos (meaning God solving these issues both now and in the eschaton)? Greidanus attempts to do both, and it is sometimes difficult to distinguish between them.

This problem is most evident on page 55, which provides a brief recap of Chapter 1. Greidanus indicates that 100% good chaos only existed in Genesis 1:2, while 100% cosmos was only present in the Garden of Eden prior to sin. After the fall, he suggests that there is a mixture of evil chaos and good cosmos. Thus, the former chaos is good, while the latter chaos is evil. Readers must continually ask themselves which chaos is being addressed throughout the book. A companion article, “10 Things You Should Know about Chaos and Cosmos in God’s Creation,” is available at the Crossway website. It provides brief explanations that clarify much of the issue and could have served as a useful introductory chapter within the book itself.

Aside from the confusion resulting from this terminology, Greidanus has achieved his goal of introducing the reader to the themes of chaos and cosmos in the Bible. These concepts have rarely been addressed from a perspective committed to the inerrancy of Scripture. Particularly in the early 20th century, biblical scholars were quick to associate them with the ancient Near Eastern (ANE) myths that supposedly influenced the biblical authors. In so doing, many abandoned the doctrine of inspiration. Greidanus’s work is a welcome contribution to the field: he notes the similar themes in ANE mythology without prioritizing them in the same way that earlier scholars often did.

From Chaos to Cosmos also includes a helpful guide for teaching a Bible study or sermon series on the chaos-cosmos theme. It suggests outlines for studies of various lengths. But the bible study leader who uses this guide should also anticipate questions about how Christians should interact with ANE myths about the chaotic sea and should seek out other resources that will further equip them to answer such questions.

The series title, Short Studies in Biblical Theology, informs the reader that its volumes are not exhaustive but rather introductory in nature. This book could serve as the starting point for a reader who is interested in the cloud of negativity surrounding the sea and chaos in the Bible. Those who wish to delve more deeply into the topic, should consult David Tsumura’s Creation and Destruction as well as a number of scholarly writings on the relationship between the Bible and ANE myths, such as the section entitled “Genesis 1–11 and Ancient Literature” in Kenneth Mathews’s commentary on Genesis.