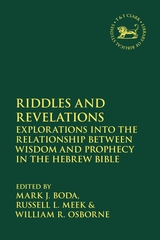 The rise of intertextual theory in the last five decades has sparked numerous studies into the relationships between various sections of the Hebrew Bible. Most often relationships are drawn from the Pentateuch to other books (e.g. this is what we find in Michael Fishbane’s seminal work Biblical Interpretation in Ancient Israel, [Oxford: Clarendon Press, 1989]). Pentateuchal priority, however, is giving way to considerations of intertextuality throughout the OT and this collection of seventeen essays is proof of that. Following in the footsteps of similar LHBOTS monographs (e.g. Dell and Kynes, eds., Reading Job Intertextually, LHBOTS 574, [New York: T&T Clark, 2013]; Dell and Kynes, eds., Reading Ecclesiastes Intertextually, LHBOTS 587, [New York: T&T Clark, 2015]), this work seeks to provide a survey of soundings for sapiential and prophetic interplay within the OT. These essays adeptly advance the methodological question and bring new light to how both wisdom and prophetic texts may mutually build upon each other.

A brief editorial preface outlines that the goal of this work is a reexamination of presuppositions and methods regarding the relationship between Wisdom and Prophecy. Russell Meek’s opening chapter, the true introduction to the book although not listed as such, outlines the history of methodology concerning prophetic and wisdom interconnectedness from Johaness Fichtner’s work in 1949 through the present. Meek highlights that a fundamental issue facing the essayists of this volume is the definition of what constitutes wisdom as a genre. This issue, Meek argues, is not insurmountable, however, and despite difficulties in defining what constitutes a paideia or wisdom tradition, form criticism enables scholarship to isolate defining characteristics of wisdom literature sufficiently for the purposes of inner-biblical study. Drawing on the work of Hays, Miller, and Leonard, Meek proposes that scholarship should adapt an author-oriented way to define inner-biblical allusion for comparing wisdom and prophetic passages. The remaining essays flow from this opening and are divided into four sections based on their function. They are (1) Methodology, (2) Wisdom Among the Prophets, (3) Prophecy Among the Sages, and (4) Responses.

For sake of brevity, I will highlight a representative essay from each section to demonstrate the editorial and scholarly aim of the volume. From section one, Will Kynes actively questions whether wisdom as a term is a hindrance since it lacks a clear historical definition. He further doubts if form criticism is the correct starting point for proper methodology seeing as it lacks sensitivity toward the myriad of ways texts can be defined. In section two, William Osborne highlights that Ezekiel uses משל more than any other OT work. This usage is especially found in Ez 26 to demonstrate the futility of Tyre’s worldly wisdom in contrast to wisdom found in the fear of YHWH. From section three, Martin Shields shows that Job and his interlocutors’ function as sages for the bulk of the story, but it is only when direct special revelation occurs (“prophecy”) that the full point of the story is understood. Through an intertext reading with the Suffering Servant in Isaiah, the reader is to see that “Job’s author knew that accounting for individual circumstances was well beyond the means of even the most exceptional sage without the benefit of divine guidance” (197). From the final section, Tremper Longman evaluates each preceding essay and concludes that the best question raised by this study in the role of divine revelation within sapiential works and calls for a furthering of this scholarly question.

There is much that is commendable in this volume, but it truly shines in its exploration of methodology. For those new to considerations of intertextuality and its application, Meek’s essay is an excellent primer that highlights the significant developments in the field over the past seventy years. His ample references to other works will enable readers to identify and engage with many critical volumes in this field. Similarly, Kynes and Dell’s essays, both of which probe the problem of genre classification and the depth of intertextuality as a discipline, are tremendous essays that call future scholars toward a more careful and nuanced approach to this topic. Kynes particularly, drawing on the prior work of James Crenshaw, calls scholars to avoid modern and anachronistic categories in genre but instead to engage with categories as the ancient Israelite would have understood them. The middle of the book, while not up to the stellar bar set by the book’s opening and concluding sections, still has several excellent essays. In one of the better entries, Eric Ortlund explores the use and subversion of wisdom themes in Isaiah. Ortlund demonstrates that the prophet skillfully highlights the necessity for wisdom to be tied to YHWH and that separated from Him wisdom becomes merely a part of the spiritual blindness within the people. This view of wisdom, as either moral or immoral depending on its source, concords with what many of the other essays also conclude.

One persistent difficulty facing this work is that the breadth of disciplines it seeks to engage necessarily limits the depth to which it can engage any discipline. This can be seen by a lack of critical discussion on the distinction between diachronic (“author-oriented”) and synchronic (“reader-oriented”) intertextuality. Lacking such a section, which could have nicely prefaced the work, the reader is left unaware of the deeper questions and possibilities in intertextual study. Additionally, the problems related to category or genre definition, viz. the issues raised by Kynes, are present throughout and are not always adequately addressed by specific essays. The problem of category in another sense can be seen in the inclusion of Andrew Steinmann’s essay on Daniel as a prophetic book, a classification that is not without some historical problems. Such issues though do not materially restrict the value of this volume, rather they sound a clarion call for further and fuller work to be done here.

Overall, this work accomplishes its purpose in calling a new generation of scholarship to consider and explore critical questions on intertextuality between sage and prophet. These essays advance the question of textual influence between wisdom and prophecy as presented from the texts while keeping the biblical text front and center throughout. A rich diversity of opinion is carefully captured by the editors, and the breadth of collegial discussion within is to be commended. Those interested in wisdom literature, prophetic literature, intertextuality, or all of the above, should benefit from the robust and clear scholarship found in this volume.