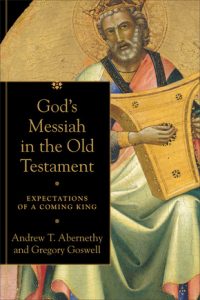 The real Jesus of Nazareth came to fulfill the BC Scriptures. That was and is his “job description.” He is “the Lord’s Christ” (Luke 2:26), God’s Messiah. The words “Christ” in Greek (christos) and “Messiah” in Hebrew (mashiach) mean “Anointed One” (cf. John 1:41). While Jesus fulfills the BC Scriptures in many ways, one crucial dimension is the royal Messianic King from the line of David, anointed with the Holy Spirit.

To understand Jesus of Nazareth as the anointed Davidic King requires study of the BC Scriptures. For that study I recommend this volume. Andrew T. Abernethy is associate professor of Old Testament and degree coordinator of the MA in Biblical Exegesis at Wheaton College, and Gregory Goswell is academic dean and lecturer in Old Testament at Christ College in Sydney, Australia.

The volume discusses messianism and the expectations of a coming Davidic king in the Old Testament. The authors take a balanced approach that avoids two ditches evident in the secondary literature. Some studies limit the scope to passages explicitly using the word “anointed one” in reference to a future figure. Those who follow that approach end up devoting more space to intertestamental literature than to the Hebrew Scriptures. Some other studies try to shoehorn into the topic almost every future-tense passage, including texts about priests and prophets. Abernethy and Goswell focus on the texts that explicitly deal with kingship, in which “this royal figure is prefigured, anticipated, predicted, or described” (p. 1).

Except for Ruth, the authors follow the tripartite order of books in the Hebrew canon: Torah (Pentateuch), Former and Latter Prophets, and Writings. They deal with texts in the following biblical books: Genesis, Numbers, Deuteronomy, Judges, Ruth, 1-2 Samuel, 1-2 Kings, Isaiah, Jeremiah, Ezekiel, Hosea, Amos, Micah, Zechariah, Malachi, Psalms, Daniel, and 1-2 Chronicles. They treat the texts in a holistic way and avoid extracting verses from their written and historical context. They conclude the volume with a survey of Jesus as the Christ in the New Testament.

The volume is well-written and displays thorough research. The authors attend to the Hebrew in a commendable way. For example, they point out that the noun often translated “branch” denotes vegetative growth or a “sprout” that springs up from the ground, not a branch on a tree (Jeremiah 23:5; 33:15; Zechariah 3:8; 6:12): “Just as vegetation grows from an unseen seed beneath the surface of the ground, so God’s promise to David will spring to life when all seems lost” (p. 108).

Various kinds of biblical material set forth expectations for the coming Davidic King such as explicit promises, royal narratives, and prayers. The biblical texts most commonly characterize the Messianic King as promoting the centrality of God as King and his temple and reigning with justice and righteousness. The king can be spoken of with various metaphors, such as lion, scepter, shepherd, and sprout. By including many biblical texts in their discussion the authors reveal a complex and multifaceted picture, what they liken to an abstract mosaic.

Here are some highlights. The authors begin with the Pentateuch as laying the foundation, concentrating on Genesis 3:15 and 49:8-10, Numbers 24:17-19, and Deuteronomy 17:14-20. They offer a nuanced view of the book of Judges, showing that it invites the readers not to give up on kingship but to hope for a human king who “would rule in a way that guides Israel to live under the rule of God” (p. 34). They give an insightful discussion of the book of Ruth as giving hope for the future of the Davidic house. The books of 1-2 Samuel and 1-2 Kings set forth the ideal for the future Davidic King. King David himself was the basic paradigm, a king after Yahweh’s own heart who prioritized true worship of Yahweh, implemented justice, and was victorious in battle over Israel’s enemies. Central to the entire topic is God’s covenant with David. The ideal of the early Solomon includes the king’s extensive dominion, ruling with justice and wisdom, commitment to the temple, and exclusive faithfulness to Yahweh. The subsequent Davidic king who receives the highest marks is King Josiah. (The authors should have given more attention also to King Hezekiah.) The book of Kings helps to establish Messianic expectations. The book of Chronicles encouraged the postexilic community in their current situation by highlighting the centrality of temple worship, which was fostered by King David and other Davidic kings. At the same time the Chronicler stressed God’s enduring commitment to the Davidic promise. The prophets spoke of a future Davidic king who will be an agent of God’s kingly rule. In Zechariah the royal Davidic “sprout” is portrayed as rejected, pierced, and slain in accord with God’s plan. The authors rightly emphasize the fulfillment as both the “now” and the “not yet.”

By way of critique I thought that the authors’ treatment of the Psalms was too beholden to a sequential reading strategy. The prayers for the Davidic King in Psalms 72, 89, and 132 were to remain the prayers of postexilic Israel. The authors should have given more attention to the portrait of a suffering Davidic King, which is evident both from the Davidic Psalms and from the history of King David. They neglected Psalm 22. According to the four Gospels, Jesus’ reign on David’s throne began on the throne of a cross.

I also found some of their interpretations unconvincing. With a rather convoluted argument they propose that “the booth of David” in Amos 9:11 refers to Jerusalem and her temple. On the contrary, it is simply a sarcastic play on the idiom “the house of David.” Instead of a strong “house” it was a flimsy “booth/hut” about to fall. But God promised to raise it up. According to James as understood within the context of Acts, God restored the Davidic dynasty by raising Jesus the Davidic Messiah from the dead (Acts 15:16; cf. Acts 2:24-32; 13:22-37). Goswell suggests that the figure riding on a donkey in Zechariah 9:9 is Yahweh, but that seems highly unlikely given the text’s focus on the animal and the parallel in 1 Kings1:33-40. Moreover, the authors ignore some things that call for attention, such as the significance of calling the future royal figure simply “David” (Ezekiel 34:23; 37:24; Hosea 3:5; cf. Isaiah 11:1) and the importance of Isaiah 11:10, the promise that Gentiles will come to the future Davidic King (cf. Romans 15:12). They ascribe the promise of worldwide “greatness” in Micah 5:4 to Yahweh instead of the future Davidic King, but that is grammatically less likely.

Nevertheless, I found their work overall to be an outstanding treatment of one important trajectory in the BC Scriptures. We Christians confess that Jesus of Nazareth is “the Anointed One/Messiah/Christ.” He was and remains the Messianic King from the line of David, as the crucified, risen, and exalted Jesus himself states at the end of the Bible: “I am the shoot and the descendant of David” (Revelation 22:16; cf. 5:5). The fine volume by Abernethy and Goswell greatly aids us in making that confession with understanding and clarity. 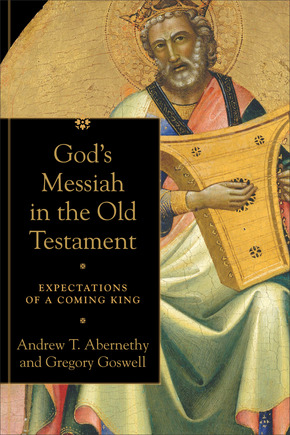