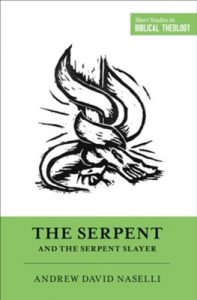 Andrew David Naselli (PhD theology, Bob Jones University and PhD New Testament exegesis and theology, Trinity Evangelical Divinity School) is associate professor of systematic theology and New Testament for Bethlehem College & Seminary in Minneapolis, MN, administrator for the evangelical theological journal Themelios, and one of the pastors of Bethlehem Baptist Church in Minneapolis. Naselli’s The Serpent and the Serpent Slayer is an entry in the Short Studies in Biblical Theology series (SSBT) from Crossway Publishers (edited by Dane C. Ortlund and Miles V. Van Pelt). The studies are short because of the series purpose “to connect the resurgence of biblical theology at the academic level with everyday believers” (11).

Naselli’s preface begins with a statement of presuppositions consonant with the SSBT purpose and the evangelical confessional stance of the publisher: (1) the inspiration, inerrancy, and authority of Scripture; (2) the necessity of a “whole-Bible canonical approach” to biblical interpretation; and (3) the conviction that “the whole Bible progresses, integrates, and climaxes in Christ” (13-14). Naselli’s “biblical theology of snakes and dragons” (13) aims to contribute to the goal of the series by demonstrating that his colleague Joe Rigney’s “pithy way to summarize the Bible’s storyline” is accurate: “Kill the dragon, get the girl!” (15, 17). Though the “serpent theme” might be relatively unfamiliar to the average believer, Naselli argues that it “is a prominent theme at the Bible’s bookends … and in between” (33, emphasis added). The serpent of Genesis 3 and the dragon of Revelation 12 are not coincidental, as most readers will recognize, but neither are they marginal, as some may suspect. In other words, the Scriptures, studied canonically, present a unified dragon-slaying story.

After a brief preface, Naselli’s introduction provides several paradigms for understanding Scripture as a dragon-slaying story. Satan is the “serpent” (villain), God’s people are the “damsel in distress,” and Jesus is the “serpent slayer” (hero) (18). Naselli includes both “snakes” and “dragons” under the “umbrella term” of “serpents.” However, these are not mere synonyms; Naselli argues that the two categories of “snakes” and “dragons” represent “two major strategies” of Satan, the Serpent: “Snakes deceive [tempt, lie, backstab]; dragons devour [attack, murder, assault]” (18).

With the stage set to view Scripture as a dragon-slaying story, Naselli offers four chapters and a conclusion, followed by an appendix. True to his purpose (33), Naselli’s chapters examine the serpent theme “at the Bible’s bookends” (chs. 1 and 4) “and in between” (chs. 2 and 3). The first chapter focuses on the first “bookend” in Gen 3. Satan, through the talking snake (46-47), deceives Eve, Adam follows, the couple is banished from the garden, and the battle is on: “The rest of the Bible’s storyline traces the ongoing battle between the snake’s offspring and the woman’s offspring” (40).

The middle chapters survey this battle “between the Bible’s bookends.” In the second chapter, Naselli explains that, though serpents and serpent symbolism occasionally represent the “positive quality” of shrewdness (50-51), they are “overwhelmingly negative in the Bible” (51). They primarily symbolize God’s enemies, ultimately Satan, “the serpent that energizes other serpents [i.e., enemies of God and His people] to craftily deceive and devour people” (54, emphasis original). The third chapter is a diachronic survey of six “categories of the serpent’s offspring” in the Bible’s symbolism (69). The exodus was a victory over Egypt’s serpent-worshiping Pharoah (69-82). The “wicked leaders” of Canaan and Moab (like scale-wearing Goliath) were “serpent heads to crush” (82-91) Nebuchadnezzar and the Babylonians were “sea monsters” and “serpents” (92-93). Though there is no explicit ‘serpentine’ language applied to Herod by Scripture, “Satan the murderous dragon energizes” him as he follows Pharoah’s path of killing children (93-95). The Pharisees are a “brood of vipers” who “first tempt Jesus [like snakes]… and finally resort to murdering Jesus [like dragons]” (95-97), followed by other “deceitful” false teachers compared to Satan in the NT (97-103).

The fourth chapter examines Satan’s work as “the devouring dragon” at the Bible’s latter “bookend,” Revelation. The dragon is a “deceiver” (Rev 12:9) and a devourer (Rev 12:4), but he is defeated by Christ, “the ultimate serpent crusher” who “decisively crushed the dragon by being ‘crushed for our iniquities’” (111, emphasis original). Because of the “already but not yet” nature of God’s Kingdom, Naselli argues, the dragon-slaying story will nevertheless continue until Christ’s return (115).

Naselli concludes with six ways to apply Scripture’s dragon-slaying story in the Christian life. Naselli exhorts believers not to imitate the serpent by “killing unborn babies” (like Pharoah and Herod killed newborns), “embracing the prosperity gospel,” or “slandering people” (123-24). They ought not believe Satan’s lying temptations to sin (125-26), but rather they ought to fight him by “feel[ing] disgust at his poison” (129). They ought to “exult in the serpent slayer” (129-30), “enjoy good serpent slaying stories … that make [them] love what God loves and hate what God hates” (130), and “trust the serpent slayer … when the serpent is persecuting [them]” (131). Besides substantive indices, Naselli includes an appendix of 11 Hebrew and 5 Greek words naming serpents, their definitions in HALOT and BDAG, respectively, and their occurrences broken down by book and chapter.

Naselli’s work is short without being shallow and full without being dense, serving its purpose and its target audience. Any thoughtful Christian reader should find Naselli’s illustrations and applications meaningful (like the six applications in the conclusion) and his more technical explanations (like the brief discussion of millennial views on p. 120) sufficiently understandable. Some readers may wish for elaboration at points (e.g., the relationship between commendable ‘shrewdness’ and damnable ‘deception’) or question the value of some sections (e.g., an overview of “six of the most popular dragon-slaying stories in English literature” [19]). In a work of this size and scope, however, Naselli has set a high standard of excellence for an introductory ‘theme-tracing’ biblical theology book, a prolific category at present.

Those with an academic interest in the book’s topic or the broader field of biblical theology may be pleasantly surprised at the value of Naselli’s short work as a useful starting point for research (especially through footnotes, the appendix, and the indices). In contrast to James Charlesworth, whose “744-page tome” takes Scripture’s serpent symbolism as “primarily positive” (14, emphasis original), Naselli sees serpent symbolism as primarily negative in Scripture, including in John 3:14 (14). Following John Currid, Naselli takes the “pole” on which Moses’ bronze serpent was placed as a “military standard,” signifying Yahweh’s victory over Egypt (76). Along these lines, Naselli suggests that “it is possible that Moses depicted [the serpent] as impaled on a military standard,” corresponding to Christ’s death on the cross as a representative of sin (77, emphasis original). This negative view of serpent imagery aids Naselli’s take on Scripture as a unified dragon-slaying story with a primary antagonist. Though brief, broad works of biblical theology must by necessity take some points for granted and assume some arguments, Naselli effectively demonstrates the potential of these works to undergird more narrow arguments and make valuable suggestions for further scholarship. 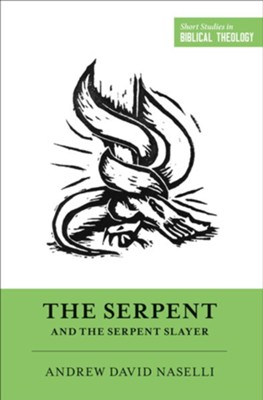