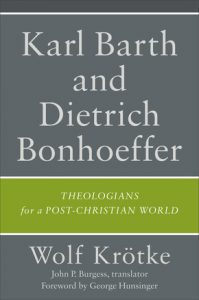 Wolf Krötke (b. 1938) is professor emeritus of systematic theology at Humboldt University in Berlin, where he began teaching in 1991 and retired in 2004. A student of Eberhard Jüngel (one of Karl Barth’s most distinguished pupils), Krötke was the recipient of the international Karl Barth Prize in 1990, and he is one of the few theologians today who have done detailed work on both Karl Barth and Dietrich Bonhoeffer. However, as John Burgess notes in his translator’s preface, “while Professor Krötke is regarded in Germany as a major theological voice and a superb interpreter of Barth and Bonhoeffer, little of his work has been translated into English” (ix). This book serves to remedy this issue.

Although the title suggests otherwise, this book is not about Karl Barth and Dietrich Bonhoeffer. Instead, it is a collection of seventeen translated essays about Barth or Bonhoeffer, all previously published in German, from across Krötke’s career (the earliest in 1981, the latest in 2013). The first eight essays are about Barth, and the final nine are about Bonhoeffer. In lieu of summarizing all of the essays, it will suffice to note some common moves that Krötke makes throughout the collection.

Throughout the essays, Krötke strikes an excellent balance between defense and criticism. He is able to correct various misconceptions about the theologians without becoming a Barth or Bonhoeffer sycophant. Frequently, Krötke highlights the nuances and continuity of Barth’s and Bonhoeffer’s views before asserting his own critiques. In chapter 2, for example, Krötke provides a helpful summary of Barth’s concept of religion (pp. 28-29). He argues that Barth was not overwhelmingly negative toward religion before critiquing his appraisal of atheism as a fundamentally religious critique of religion. Krötke, in contrast, thinks that religion and atheism are meaningfully different (pp. 42-44). Krötke similarly defends and appraises Barth’s anthropology (ch. 3), christology (ch. 4), doctrine of election (ch. 5), description of pastoral care (ch. 6), political theology (ch. 7), and ecclesiology (ch. 8). Specific areas of disagreement with Barth include his handling of the resurrection and the virgin birth (pp. 67-70) and his conclusions about the church as the body of Christ (pp. 125-26). In an especially strong discussion of Barth’s theological perspective on resistance as it developed over time (ch. 7), Krötke also denounces his appropriation of war (p. 117).

As for Bonhoeffer, Krötke devotes three chapters to Bonhoeffer’s discussions of “religions and religionlessness” (ch. 9), “religionless Christianity” (ch. 10), and the “nonreligious interpretation of biblical concepts” (ch. 16). The rest of the chapters focus on Bonhoeffer’s views on theology proper (ch. 11), exegesis of the Psalms (ch. 12), divine guidance (ch. 13), political resistance (ch. 14), and the state (ch. 15). Krötke maintains that Bonhoeffer’s critiques of Barth in prison were largely misguided (p. 58), and that his exegesis of the Psalter was too exclusively christological (p. 186) and not eschatological enough (p. 188). Chapters 13–15 especially illustrate Krötke’s tendency to defend Bonhoeffer against accusations of inconsistency, even as he acknowledges the provisional nature of Bonhoeffer’s thoughts on these matters. Krötke’s analysis of the similarities and differences between Bonhoeffer’s and Feuerbach’s critiques of religion when it comes to the question of “sharing in God’s suffering” (pp. 155–62) would be worth the price of the entire book!

Overall, the major strength of this book lies in the East/eastern German experience and perspective from which Krötke speaks. Although he never got the opportunity to study with Barth (or Bonhoeffer), Krötke immediately put their theologies to the test in the high-pressure, ideological environment of East Germany before the fall of the Berlin wall and in the post-Communist milieu. In chapters 1 and 16, Krötke reflects upon the legacy and relevance of Barth (ch. 1) and Bonhoeffer (ch. 16) for East (now eastern) Germany. He laments the East German tendency to misinterpret and coopt Barth and Bonhoeffer for nefarious ideological purposes. And he mines both theologians for resources that the church can use in eastern Germany’s especially “God-forgetful” (pp. 135–37, 235) context today. Krötke’s analysis of how the church should relate to the state and to the world (see chs. 1, 7, 8, 13, 14, 15, and 16) has an experiential immediacy to it that younger, American Barth and Bonhoeffer scholars simply cannot manufacture.

Because Krötke is a leading contemporary figure in both Barth and Bonhoeffer studies, this book would be well-suited for a student researching the topic of one or more of the essays. For example, chapter 7 provides an excellent discussion of Barth’s thought on theology and resistance, while chapter 12 offers a great starting point for research on Bonhoeffer’s exegesis of the Psalms. That said, depending upon the original publication date of a particular essay, Krötke’s analysis may or may not reflect recent developments within Barth or Bonhoeffer studies. For example, two of Krötke’s three Bonhoeffer essays that address “religionlessness” and/or the “nonreligious interpretation of biblical concepts” were written in the 1980s, before Ralf Wüstenberg’s influential study of Bonhoeffer’s changing views on religion was published (A Theology of Life: Dietrich Bonhoeffer’s Religionless Christianity [Grand Rapids, MI: Eerdmans, 1998; German original, 1996]). Some of Krötke’s early conclusions about Bonhoeffer seem to overlook how Bonhoeffer’s description of “religion” changed quite drastically, especially in Letters and Papers from Prison.

Also conspicuously absent from this book was any mention of Andreas Pangritz’s indispensable monograph on the Barth-Bonhoeffer relationship, Karl Barth in the Theology of Dietrich Bonhoeffer, first published in German in 1989 (Westberlin, Germany: Alektor Verlag) and now in its second English edition (Eugene, OR: Wipf & Stock, 2018). Furthermore, there is only one mention of Bonhoeffer’s well-known accusation of Barth’s “positivism of revelation” (p.58). Even there, Krötke does not offer his own explanation. It is unclear whether the absence of Wüstenberg and Pangritz from this book was due to Burgess’s decision to eliminate certain footnotes from the German original of these essays.

Most disappointingly, the relationship between Barth and Bonhoeffer is mentioned only four times (pp. 58, 116, 147–48, 226). Although Krötke offers the reader much to think about when it comes to specific topics and themes in their thought, and although he gestures throughout this book at the relevance of each theologian’s work for today, this reviewer desired much more from him on how both theologians, taken together, might help the church move forward theologically in a “post-Christian world.” Surely Krötke is one of the best-equipped theologians alive to offer such comparative and critical analysis of Barth and Bonhoeffer. Unfortunately, he provides precious little of it in this collection of essays. At the very least, a more accurate, chastened title would help readers know what to expect.

Therefore, a student who would like to learn more about the historical and theological relationship between Barth and Bonhoeffer would be much better served by Pangritz’s Karl Barth in the Theology of Dietrich Bonhoeffer to start, Wüstenberg’s A Theology of Life to understand Bonhoeffer’s thought on “religion,” and Tom Greggs’s Theology Against Religion: Constructive Dialogues with Bonhoeffer and Barth (New York: T&T Clark, 2011) to apply their ideas to today’s complex environment of pluralism and secularism. If, after this, Krötke addresses a particular topic in Barth’s and/or Bonhoeffer’s thought that is relevant to the student’s research, then he is worth adding to the discussion as an important voice—especially now that a sampling of his contributions is available in English. 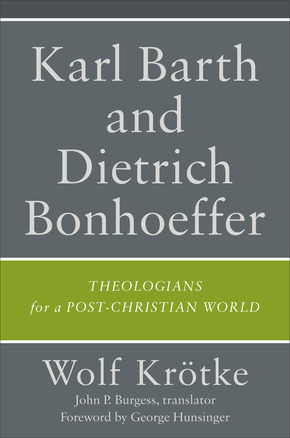