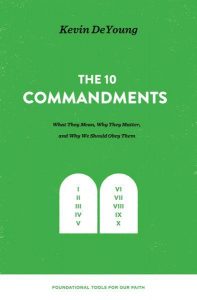 At the time of printing, and according to the back cover of the book, Kevin DeYoung serves as a pastor at Christ Covenant Church in Matthews, North Carolina, and also as an assistant professor of systematic theology at the Reformed Theological Seminary in Charlotte. DeYoung completed his PhD at the University of Leicester.

His book begins with a quick tour of secular feelings about the Ten Commandments. This tour becomes the impetus for posing and answering two questions in the introduction: “Why should we study the ten commandments?” and “Why should we obey the Ten Commandments?” The answers to those questions lead to the following ten chapters, each presenting one commandment. These chapters focus on Christian understanding and application, starting with the first commandment in a chapter he titles “God and God Alone.”

“God and God Alone” begins with an appeal to true faith in the true God, then focuses on how the commandments underpin modern society and moral law (p. 30). From there, he works through the first commandment, examines the Heidelberg Catechism to understand the Decalogue in total, and then backtracks to a list of reasons from Douglas Stuart on why the Israelites kept slipping into idolatry (p. 34). The chapter concludes by applying the first commandment to Christianity: “If you don’t know God in Christ, then you don’t really know God” (p. 38). The second commandment (and chapter) is on “worshiping God in the wrong way” (p. 42). DeYoung illustrates this idea with the Golden Calf incident in Exodus 32 (p. 43). Then, he applies this lesson by concluding the right way to worship God is through Jesus. Jesus is “the fulfillment of the second commandment” (p. 50).

Chapters 3-10 all follow different patterns as well, although each one begins with the commandment and ends with an application. In Chapter 3, the commandment on taking the Lord’s name in vain finds application in Christians living worthy of the term Christ. The following commandment finds its fulfillment in the Christian taking a sabbath to rest in Christ (p. 77). DeYoung expands the fifth commandment to mean showing respect for all, including those in government (p. 92). He uses the commands of Jesus concerning anger and loving all people for application of the sixth commandment (p.130-4). Commandment seven is expanded to protecting marriage and family (p. 115), the eighth commandment against stealing becomes a focus on laying up treasures in heaven rather than on earth (p. 137-8), and the ninth commandment is fulfilled by “loving your neighbor as yourself” (p. 152). Finally, the tenth commandment (coveting) is transformed into a focus on the already-not yet kingdom. (p. 165-6).

Overall, DeYoung should be commended for producing a hermeneutic that applies each commandment through Jesus’s ministry. This method negates troublesome applications and legalism. One such example is the first commandment where he places “Have no other Gods before me” in the exclusivity of Jesus Christ. DeYoung should also be commended for working through New Testament passages and allowing them their full weight in application. One such instance is Paul’s words on keeping holy days and Sabbaths in Colossians 2:16-17. Here, DeYoung concludes, “Sabbath keeping was spiritualized to mean a life of devotion and humility to God” (p. 71). He then redevelops the idea of the Sabbath as an issue of trust: a person must decide if he or she is willing to trust God for the time and work lost while resting during the Sabbath (p. 77).

Unfortunately, weaknesses in method and argumentation temper these commendations. One such shortcoming is his (several) assertions that lack support or notation. For example, he denies henotheism existed in the Old Testament (p. 31) even though several Old Testament scholars would disagree. They do so for several reasons, including the surrounding culture as the Egyptians and those in the Levant were polytheistic at this time (outside of Akhenaton’s reign if one holds to a later date for the exodus). Furthermore, wars between nations equaled conflicts between gods (YHWH vs. Pharaoh as Horus’s representation on earth, YHWH vs. Dagon in the days of Saul and David, and so on). However, DeYoung makes no mention of scholars who agree or disagree with his position.

A second weakness in argumentation is found in his treatment of the New Testament. In one place, he argues Jesus and Paul stripped the Jewish laws from the sabbath, leaving only the original intent. However, he then explains, “The Gospel writers are at pains to demonstrate that Jesus never violated the fourth commandment” (p. 68). The problem falls in the discontinuity of his arguments: in the first century, the fourth commandment is bound in the Jewish laws they sought to strip. Consequently, Jesus stripping away the first-century understanding breaks the commandment in the context of the first-century Jewish mind. This problem comes to the forefront when some Pharisees confront Jesus in Mark 2:23-27. There, Jesus concludes in “The Sabbath was made for man, not man for the Sabbath” (v. 27). Although arguments can be made for how both statements are true, DeYoung does not explain how that might be.

These two examples of weaknesses, (1) DeYoung’s assumptions and assertions without footnotes, endnotes, or further argumentation; and (2) his discontinuity of arguments illustrate the limited usefulness of this book depending on the target audience. The tone of the book indicates the focus is on the laity. However, his writing scores above a PhD reading level (using Flesch-Kincaid) in a few places, making it difficult to use this material in a Sunday school class, Bible study, or even as a background study for the average Christian. Furthermore, the argumentation is difficult to follow as several chapters seem to meander between Old Testament interpretation, theology, New Testament interpretation, and application.

Consequently, in its current format, this book is difficult to recommend to bible students, scholars, or lay leaders. However, at the core of this book are the seeds of a great hermeneutic and an excellent tool for pastors. If a second edition can address the concerns listed above, it would be a good book for training Bible students and laity in applying Old Testament teachings to the Christian life.