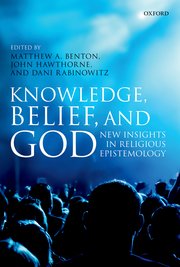 Reformed epistemology is roughly the thesis that religious belief can be justified or warranted apart from argumentation. As the editors of Knowledge, Belief, and God note, Reformed epistemology is the dominant position in the epistemology of religion (p. 3). While there has been a lot of work done in the 90s and 00s, discussing how belief in God can be properly basic, the editors aim to produce a new volume discussing recent developments within the field.

The volume is broken up into the following four sections: Historical, Formal, Social, and Rational. The historical section addresses traditional problems in the field of epistemology of religion with recent developments in analytic epistemology. For example, Charity Anderson’s interesting essay applies Maria Lasonen-Aarino’s work on knowledge and defeat to Hume’s arguments against miracles. Anderson argues that a subject can possess knowledge that a miracle occurred, while her belief at the same time fails to meet the standard of reasonability. Other interesting essays in this section include Richard Cross’ essay on Scotus and Aquinas. Here, Cross discusses Scotus’ and Aquinas’ epistemology in light of contemporary labels to help elucidate their views on how Christian belief can be considered rational.

The formal section is, for the most part, a section on formal probability and fine-tuning. I imagine that Hans Halvorson’s “A Theological Critique of the Fine-Tuning Argument” will be considered one of the more controversial articles. Halvorson argues that the fine-tuning argument undermines itself. Roughly, the idea is that, if we believe that we are warranted in believing that it is likely that God would create a life permitting universe, “then we are just as warranted in believing that God would create laws according to which nice universes are likely” (p. 133). But since the laws are not such that we should expect nice universes, either God does not exist, or we are not warranted in believing that God would create a nice universe (p. 133). Those who are sympathetic to skeptical theism, will want to pay special attention to this chapter.

The social section of the book is excellent. Max Baker-Hytch’s essay, “Testimony amidst Diversity” is especially stimulating. Baker-Hytch argues that religious belief that is primarily based on testimony is deficient as it merely amounts to animal knowledge. What a subject really should be concerned with is reflective knowledge. A subject is said to possess reflective knowledge when she has a knowledgeable perspective on her reliability (p. 197). Baker-Hytch gives two reasons as to why we should think animal knowledge is deficient. I have the space here to go over one such reason.

Baker-Hytch argues that animal knowledge violates the norms of assertion. By ‘norm of assertion’, I mean to say that, S only can assert some proposition P, if S knows that P. While it could be said that S knows that God exists if her belief is produced by the right sort of external conditions, S would not know that she actually meets the qualifications for being able to assert that God exists, unless she possessed reflective knowledge. For Baker-Hytch, there’s a further “knowledge norm”: in order for S to assert P, S needs to know that she knows; or, as Baker-Hytch puts it, there would be a “sense in which she is criticizable” (p. 200). Baker-Hytch realizes that the knowledge norm view could hinder what philosophers could actually say given the controversial nature of the philosophical domain. As Baker-Hytch puts it, it is “hard to know whether one has knowledge and hence hard to know whether one is entitled to assert the contents of one’s belief” (p. 200). However, he thinks that philosophers have room to hedge assertions in such a way as to exempt a speaker from violating the knowledge norm (p. 200). Religious believers, on the other hand, are committed to outright asserting that God exists.

As for the last section, while all of the articles deserve a read, Matthew Benton’s article, “Pragmatic Encroachment and Theistic Knowledge,” is especially worthy. Benton starts the article off by discussing how some contemporary philosophers believe that non-epistemic factors should play a role in a belief’s epistemic evaluation (p. 267). There are some who argue that pragmatic or practical considerations should also be a part of the evaluative process. Benton moves on briefly to address Pascal’s wager. Benton puts the wager as follows: “if traditional theism (including certain assumptions about a heavenly afterlife) is true and one believes it, then one stands to gain much; and if one does not believe it, then one stands to lose out on much (and, one may even be punished much!) But if atheism is true and one believes it, one does not, by comparison, gain much at all” (Ibid.). For Pascal, these truths provide pragmatic motivation to believe in theism. Benton, however, takes Pascal in a different direction. Benton argues that atheistic belief, by Pascal’s reasoning, fails to be pragmatically relevant. In fact, Benton argues that because of this, atheism is epistemically irrational (p. 284). This of course rests on the assumption that pragmatism plays a role in evaluating a belief’s epistemic status.

In evaluating the book overall, the book accomplishes the goal of the editors. It gives a survey of the different views and new ideas that exist in the epistemology of religion. The book contains extremely valuable essays and it should be recommended to anyone with an interest in religious epistemology. With this stated, it is odd that this book did not contain essays addressing the contemporary state of Reformed epistemology. There have been fascinating developments in the literature. For example, Kelly James Clark and Justin Barrett have done interesting work on how cognitive science relates to Reformed epistemology (Kelly James Clark and Justin L. Barrett, ‘Reidian Religious Epistemology and the Cognitive Science of Religion,’ Journal of the American Academy of Religion. 79 3 [2011]: 639-75). Erik Baldwin and I have published several papers on the topic of Plantinga’s epistemology and the world religions (For a comprehensive take, see Erik Baldwin and Tyler McNabb, Plantigian Religious Epistemology and the World Religions: Problems and Prospects [Lanham: Lexington Press, forthcoming]). And Andrew Moon recently proposed a new way to gloss Plantinga’s Reformed epistemology (Andrew Moon, ‘Plantinga’s Religious Epistemology, Skeptical Theism, and Debunking Arguments,’ Faith and Philosophy 34 4 [2017]: 449-70). Of course, not having a chapter that engages Plantinga’s Reformed epistemology should not take away from what I have stated about the book. It is not often that you can say of a philosophy book that the book is worth its price. Knowledge, Belief, and God is one of those books.