The editors of this volume are well-known among textual critics. Elijah Hixson is a research associate in New Testament Text and Language at Tyndale House at Cambridge. Peter J. Gurry is assistant professor of New Testament at Phoenix Seminary. Both have published extensively on text critical issues and contribute to evangelicaltextualcriticism.blogspot.com. The book examines overstated claims, dated information, and distorted statistics by well-meaning apologists.

Chapter One is an introduction by the editors who provide a brief overview of the contents of the book. They resonate with apologists who desire to defend the New Testament text against critics. However, Bible students must not support the text with well-intentioned but ignorant falsehoods. If believers continue to perpetuate errors then they perform a disservice, not a defense. Chapter Two addresses myths about autographs. Certain evangelicals purport that some original autographs lasted for centuries. Timothy Mitchell, however, tempers such claims. Climate, persecution, wars, and natural disasters are a few factors that undercut this myth.

Jacob Peterson takes on math myths in Chapter Three. Those who appeal to quantities of manuscripts to support textual accuracy are mistaken. Instead, it is safer to weigh manuscripts. Some apologists sensationally suggest 24,000 Greek manuscripts are available. Instead, a number from 5,100 to 5,300 is more accurate. Chapter Four addresses popular claims on how much better the Greek text of today is compared to the reconstruction of other ancient texts. But James B. Prothro reminds that statistical comparisons are often based on old data and only demonstrate the New Testament has a better textual basis.

Chapters Five and Six take aim at dating myths and compose two of the best chapters. In Chapter Five, Hixson argues against the common perception that the dates for the earliest manuscripts can be narrowed down. An apt illustration is P52, a fragment of the Gospel of John that has been dated to AD 125. Hixson surveys dating methods and concludes that a range of fifty to one hundred years is more legitimate. This would make P52 closer to AD 200. Gregory Lanier continues the treatment of dating myths in Chapter Six. Specifically, he takes on the assumption that younger manuscripts are less reliable. This is normally an attack against the Textus Receptus. Lanier contends, however, that a multitude of Byzantine readings can be traced to the 200s.

Myths about copyists, copies, and transmission are tackled in the next three chapters. In Chapter Seven, Zachary Cole addresses the quality of copyists and misinterpretations from popular apologists. There were both competent and incompetent scribes. Generally speaking, they were trained and capable and give moderns confidence in the accurate transmission of the text. Nevertheless, copyists did make mistakes, and Peter Malik responds to copying myths in Chapter Eight. This chapter assumes knowledge of text criticism and transcriptional probabilities (what scribes were likely to correct). Malik surveys various ways that scribes corrected mistakes. Thus, there are many mistakes, but only a few examples of theologically-motivated changes. Chapter Nine also expects readers to know something about textual criticism. Matthew Solomon addresses the idea that the textual apparatus at the bottom of Greek texts only mention primary manuscripts. The bottom line is that although there are many variants, and all variants have some value, they are not determined to be part of the initial text.

In Chapter Ten, coeditor Gurry confronts the popular myth that states textual variants have no effect on Christian doctrine. To the contrary, Gurry affirms that some variants “really do touch on important doctrines” (p. 193). There are half a million textual variants, but only a few dozen are theologically significant. However, when textual scholars address them calmly, these variants do not threaten doctrine. Yet Chapter Eleven confirms some variants are theologically driven. Robert Marcello considers how much and how influential “orthodox corruption” actually is. He examines two texts (Codex Bezae and P72) and two examples (Matt. 24:36; John 1:18). Marcello concludes that some scribes did change the text for theological reasons, but “variants that might appear to be theologically motivated are better explained by other factors” (p. 227). The reliability of the text of the New Testament is not at stake.

A favorite myth is that the New Testament can be reconstructed (except for eleven verses) from the quotations of the church fathers. Chapter Twelve, written by Andrew Blaski, counters that this is simply not true. There are few exact quotes and patristic theology affects their quotes. Nevertheless, the church fathers are valuable and provide a window into early transmission history. In Chapter Thirteen, the myth that early Christians reserved the codex for canonical books is answered by John Meade. The codex was preferred over the scroll but that does not make all of its enclosed books canonical. The better approach is to study the canon lists to understand how the early church interpreted codex contents.

Chapter Fourteen discusses myths about early translations. Jeremiah Coogan raises doubts that there are ten thousand Latin manuscripts. The number is closer to one thousand. Coogan also surveys Syriac and Coptic versions. Although the number of early versions is less than what is popularly taught, they remain valuable in noting the absence or presence of textual variants. Chapter Fifteen fittingly concludes the book with modern translations. Edgar Battad Ebojo does not mention myths. Instead, he discusses how modern versions report their New Testament variant readings. Some versions do not use footnotes with textual variants while others do. Some versions include disputed passages in the text whereas others relegate them to footnotes. The translators themselves and the communities they translate for make these decisions. The bottom line is, “we should not expect modern translations to be the main place for explaining text-critical issues” (p. 323). The book concludes with a 28-page bibliography and name, subject, scripture, ancient writing, and manuscript indexes.

Each chapter of Myths and Mistakes offers valuable advice. This book may not address all the text-critical myths but the popular ones are evident and available in this one volume. Overall, the book is well-structured. Each chapter and topic flows nicely into the next. There is some unavoidable overlap. Several authors mention the usual suspects of Mark 1:1; 16:9-20; and John 7:53-8:11. Other textual examples would strengthen the arguments. But with so many authors it is understandable that they individually settled on similar verses. As the title suggests there is an assumption that readers are knowledgeable of the basic principles of textual criticism. Nevertheless, pastors can easily adapt these chapters and teach their parishioners. Students with biblical introductory classes behind them can navigate these pages with little difficulty.

Chapters Three and Six are particularly helpful in debates with church members mired in King James Version onlyism. The study could easily be enlarged with another chapter on this persistent problem nursed in the local church via the internet. Chapter Fourteen slighted potential discussion on Armenian, Ethiopic, Georgian, and other early translations. Latin, Coptic, and Syriac received in-depth treatment to the neglect of these languages. The chapter is the longest one but only by a page. Another three pages could have corrected this oversight.

The authors capably address the errors of both popular defenders and critics of the text. I winced several times because of my own repetition of these myths and mistakes. To know that famous and trustworthy evangelicals have also fallen prey to excess makes me feel only slightly less chagrined. The major accomplishment of this book is that the reliability of the New Testament is ably defended without resorting to exaggerations or loaded statistics. The book serves as a trustworthy guide to correct and update common errors. I heartily recommend this book to the church and academy. 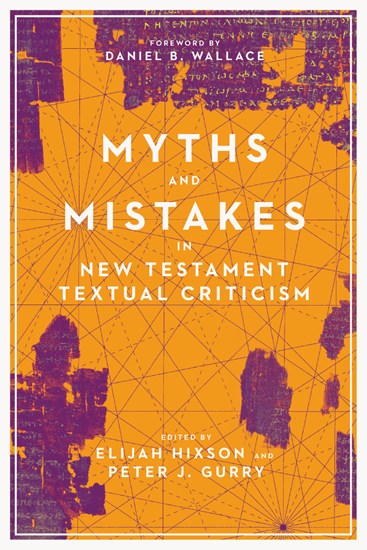