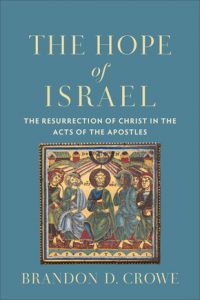 The resurrection of the body was ancient Israel’s hope, not the hope of ancient Greece or Rome.

The apostle Paul said he was in chains because of “the hope of Israel” (Acts 28:20; cf. 23:6; 24:15, 21; 26:6-8). The God of Israel fulfilled this hope by first raising Jesus the Messiah from the dead (Acts 26:22-23). Throughout the Acts of the Apostles we see this emphasis on the resurrection of Jesus the Christ. Brandon D. Crowe has written an excellent study of this emphasis. He is associate professor of New Testament at Westminster Theological Seminary.

Crowe follows the sound method of first examining the biblical texts, each in a holistic way in its written context, and then drawing from them more general conclusions. The three pillars of the resurrection theme in Acts are the speech by the apostle Peter in Jerusalem at Pentecost (Acts 2), the speech by the apostle Paul at Antioch in Pisidia (Acts 13), and his defense before King Agrippa II in Caesarea (Acts 26). Crowe also looks at additional resurrection statements in Acts by Peter, Paul, James, Stephen, Philip, and others. In the first part of the volume he works through these texts. In the second part he discusses in more general terms the theological significance of the resurrection in Acts.

In terms of the resurrection’s significance, Crowe distinguishes between the accomplishment of salvation in history and the benefits of salvation. For Luke, he argues, Christ’s resurrection is “a singular turning point in the accomplishment of salvation that ushers in the age of the exalted Messiah” (p. 5). The resurrection, ascension, and exaltation are best seen as “one movement of Jesus’s experience of glory” (p. 106). His resurrection marked the beginning of the resurrection age and inaugurated the eschatological age of the Spirit, both promised by Moses and the Prophets. As a result, it signals key redemptive-historical shifts with respect to the temple in Jerusalem as the center of worship and the defining marks of sabbath, dietary laws, and circumcision. With Christ’s exaltation begins the worldwide mission.

While Christ’s resurrection marks the start of something new regarding the history of salvation, Luke also strongly affirms continuity across the ages from Moses and the Prophets to the public ministry of Jesus before his resurrection recorded in Luke’s Gospel and on to his post-resurrection continuing work as recorded in Acts. Examples of continuity evident in Luke-Acts include the forgiveness of sins, justification, and the presence and work of the Holy Spirit.

Overall I found Crowe’s exegesis of the texts to be very strong, holistic, contextual, and well-versed in the secondary literature. While my overall assessment of Crowe’s work is very positive indeed, I did find some of his positions unconvincing. Jesus’ statement on the bodily resurrection in Luke 20:27-40 is important for the topic of “the hope of Israel.” Crowe follows a common interpretation that Jesus was referring to the intermediate state of each patriarch’s soul. It seems more likely to me that Jesus was referring to their future bodily resurrection. Although they are bodily dead now, at the resurrection they bodily live to God because their God is not the God of the dead but of the living.[1] Regarding the Transfiguration, the relevant texts in the Synoptics and Second Peter depict the event as more about Christology than proleptic of Jesus’ future resurrection as Crowe maintains. At his Transfiguration the majesty of his deity as the Son shone in and through his human nature.

I appreciate Crowe’s attempt to relate his findings to systematics, but in a few places it strikes me as trying to put a systematics square peg into a biblical round hole. He speaks in terms of God “rewarding” Jesus with the resurrection (pp. 109-110). The speeches in Acts express things in a different way, as setting forth the contrast between Jerusalem’s response to Jesus in rejecting him and the response of their God in raising him up from the dead and highly honoring him. I am also not persuaded by Crowe’s Reformed view that sees Jesus’s exaltation as occurring in both natures, as obtaining a glory in both natures which Jesus did not previously have (p. 109). Yet these issues are rather secondary to Crowe’s focus.

Given all the religious confusion and distracting noise in today’s context, American Christians need to embark on the journey of rediscovering biblical Christianity. When we read through all 66 biblical books in a serious, holistic, and contextual way, we might be surprised at what we encounter. There might emerge in the process accents and emphases that have been overlooked. Crowe’s careful study of the resurrection in The Acts of the Apostles offers such fresh insights. I highly recommend it. By virtue of our connection with the crucified and risen Messiah of Israel, Jesus of Nazareth, we too wait and yearn for “the hope of Israel,” our bodily resurrection unto eternal life. 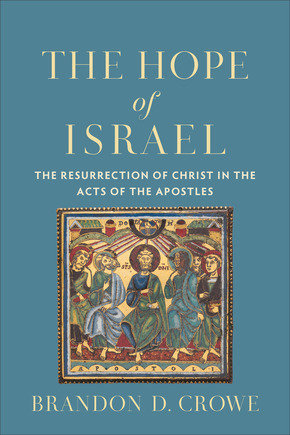