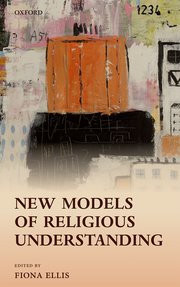 Emerging out of research conducted by the Centre for the Philosophy of Religion in Heythrop College, London, New Models of Religious Understanding (ed. Fiona Ellis) offers reflections on a refreshing new approach to the philosophy of religion. Attempting to build bridges between the analytic and continental traditions, the contributors to this volume present a method of doing philosophy of religion which moves away from ontological and metaphysical questions about the existence and nature of God. This new approach is concerned with religious practice more than belief, the kinds of knowledge and understanding that are valuable in religious discourse, and the ways in which religious or spiritual realities might become accessible only to those who enquire after them in the right way. Religious understanding is not a matter of what we know, but of what we do, how we do it, and how what we do opens up new facets or aspects of reality to us.

Despite containing contributions from eleven different authors, the book has a remarkable consistency of approach throughout; Fiona Ellis identifies two key themes in her introduction. First, the contributors to New Models are united in developing a new approach to naturalism. Ellis notes that naturalism is often interpreted to mean scientific naturalism, which in turn becomes scientism. On this view, all that exists is the scientifically measurable natural world; questions of divinity or transcendence, even value, are excluded at the outset. Ellis suggests an alternative “expansive or liberal naturalism” which allows the possibility that there may be “more to the natural world and more to our ways of explaining it that the scientific naturalist is prepared to allow” (p. 9). This is a conclusion to which all contributors would assent and is discussed explicitly in the first three chapters.

The second key theme is what Ellis (following John Cottingham) calls a “humane philosophy of religion” (p. 11). Humane philosophy of religion challenges the ratiocentric bias in much philosophy of religion, contending that truth is not wholly cognitive or intellectual. Rather, access to truth is often dependent upon the way in which one approaches something, or the stance one takes. This challenges the Enlightenment ideal that truth is accessible only to one who takes up a neutral and unbiased perspective; humane philosophy suggests not only that attempting to rid oneself entirely of bias is impossible, but that some truths require a certain commitment to be made before they can be accessed. The focus of the book, according to Ellis, is not how to understand religion, but “what it means to understand the world religiously” (p.14).

The volume succeeds on these two fronts. Cottingham excellently summarises the new approach to naturalism in his contribution (ch. 1), in which he criticises the “explanatory hypothesis” approach to religion – adopted by theists and atheists alike – according to which theism is one of various competing theories to explain the existence and nature of the world (p. 23). Cottingham is rightly sympathetic to those who are unconvinced by theism’s ability to fill in explanations where science fails, especially given the remarkable success of modern science on precisely this front. This does not admit defeat to scientific naturalism; rather, Cottingham avoids the temptation to place theism in competition with science and instead presents religious understanding as a new way of seeing the world. Echoing his earlier work (significantly, The Spiritual Dimension), Cottingham shows that the distinctiveness of religious understanding is found not in any particular content, but in a “certain mode or manner of understanding the world” (p. 29) which may not be the neutral and unbiased perspective of Enlightenment philosophy. This justifies the theistic claim made by many of the book’s contributors that achieving religious understanding requires taking up a certain starting point, posture or attitude.

This indicates the importance of a humane philosophy of religion, which Ellis describes as attendance to “the moral and spiritual sensibilities which shape religious belief” (p. 13). One of the virtues of New Models is that it displays various and complementary humane approaches to the philosophy of religion. For example, David McPherson proposes an involved epistemology of love as the starting point for a religious understanding which transfigures the world (ch. 4), and Eleanore Stump argues that we should regard theology as the pursuit of relational knowledge of God, rather than propositional knowledge about God (ch. 9). One benefit of a humane philosophy of religion is that it allows recognition of the importance of the practical and bodily aspects of religious life – aspects well known to theology and religious studies, but often neglected by the philosophy of religion. Particularly relevant here are the contributions of Clare Carlisle (ch. 5) and Mark Wynn (ch. 6). Carlisle offers a compelling analysis of the transformative power of practice and habit and skilfully integrates this with a theology of co-operative grace, while Wynn demonstrates the way in which the posture of one’s body and trained habits of perception can make visible spiritual virtues that are infused in the world. While sympathetic to the humane project, one might suggest that the book lacks a strong theoretical account of, to use Cottingham’s phrase, “the spiritual dimension”. One possible option would be to utilise Wittgenstein’s comments on aspect seeing in Part II of the Philosophical Investigations. The contributors to New Models are right to argue that engaging with or perceiving the world in different ways can divulge various moral, aesthetic and spiritual dimensions beyond what is available to the scientific, naturalistic viewpoint. There are clear commonalities with Wittgenstein’s comments on aspect seeing, and New Models would benefit from this kind of theoretical groundwork.

While the desire of New Models to move away from a philosophy of religion excessively concerned with cognition and belief is to be celebrated, there is a danger that this can go too far and undermine the significance that doctrinal commitments have for many religious practitioners. Kyle Scott (ch. 7) exemplifies this danger in his chapter, arguing that “religious understanding has greater epistemic value than religious knowledge” (p. 134). For Scott, this offers a response to scepticism concerning the reliability of religious knowledge and he concludes that “we should be willing to give up religious knowledge to achieve the greater epistemic good of religious understanding” (p. 150). While emphasising the value of understanding is a worthy task, many religious practitioners put stock in the ability for their religious understanding to reflect some true reality in the world. Even if one is convinced by Scott’s argument that understanding does not require knowledge, it is still reasonable to desire that one’s religious commitments can provide knowledge about reality as well as an understanding of one’s place within it. In a similar way, Keith Ward (ch. 10) responds to the challenge that the global and historical diversity of spiritual practice poses to religious belief by advocating an open and pluralistic approach to spirituality. Ward adopts a perennialist approach to religious experience and advocates regarding all “religions as paths to an awareness of spiritual reality” (p. 204). While this hesitancy to describe precisely the nature of the spiritual dimension is laudable – and we must be alive to the fragility of our own understanding – the lesson of this volume must surely be that religious understanding is involved, practical and concrete. This means that religious practice involves making specific commitments – to communities, rituals, and doctrines. An open spirituality such as Ward’s, although appealing to liberal ears, will struggle to speak to any tradition which claims universal truth for its doctrinal commitments (including many mainstream moderate religious communities).

While not breaking significantly new ground, New Models represents developments that have taken place in the philosophy of religion over the past decade. While the traditional questions of classical theism remain important, there is much to be gained from approaching religion as an involved way of understanding the world. The volume benefits from the fact that all of its contributors are authoritative philosophers in their own right and many have published extensively on these themes. However, for the student looking to engage with this approach to the philosophy of religion, New Models offers an excellent starting point.