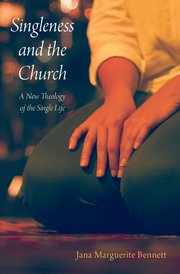 In this fresh reflection on singleness, theological ethicist, Jana M. Bennett, provides both a strong critique and hopeful corrective of American relationship culture. She writes as a Catholic scholar yet engages the American Protestant context just as insightfully—identifying the ways the church has often mirrored negative cultural narratives about singleness. The overall goal of this book is to magnify relational experiences often overlooked by the modern Christian community, specifically those in impermanent single states, and to acknowledge the ways these persons may uniquely witness to Christ and the church. Simultaneously, she encourages ways the church can be more of a witness to this community.

To begin, she proposes that one of the main problems facing current conceptions of singleness is the tacit assumption that to be single is to be lonely. She calls upon the Christian tradition which affirms both marriage and singleness for what it means to be the church, and that being lonely is neither specific nor necessary to singleness. Here, she also sets up the structure of the remainder of the book, which will look at the variety of expressions of singleness while calling upon specific guides who both contemplate and model these states.

Her second chapter focuses on the “never married,” and the unique witness they bear to the church and world regarding choice. Since her attention is on American culture, including the church, she addresses the fixation on choice and freedom for understanding adulthood. In contrast, the Apostle Paul, the guide for this chapter, exhorts the believer to be bound to Christ. This binding makes one free to follow Christ, but not free to make whatever decision one so desires (p. 49). The focus for both singles and marrieds is choosing devotion to Christ and love for the other, not “whether to get married or to remain unmarried” (p. 54). Yet, marriage is often made the ultimate ideal for relational life, even in the church. However, this is not the most important choice a person can make, and never-married persons can help witness to the more foundational choice of following Jesus single-mindedly.

The third chapter turns to those in uncommitted relationships. Bennett recognizes this state takes many forms, not all of which the church would endorse, but which still need to be witnessed to by the church. Simultaneously, they may be able to witness to the church, especially as it relates to sexual desire.The problem she highlights here is the idolization of the sexual relationship, which often reduces sex to a mere tool, commodifying bodies and persons. Instead, she argues via the guide of Augustine, that sexual desire reveals the longing for God. Instead of fearing desire, desire can be understood as a gift which exposes a deep need for God.

Next, she turns to committed relationships such as long-term dating, serious cohabitation, and engagement in the fourth chapter. Again, she recognizes the moral debates regarding sexual relations in these contexts, but since her focus is on the impermanent states of singleness, these states (sexually active or not) need to be discussed. Often these states of singleness are characterized by an anxiety to find “the One,” and yet Bennett reminds the reader that there is only one Perfect One (p. 89). Additional anxiety manifests in wanting to avoid divorce. However, these anxieties seem sourced in thinking that once a person finds his/her “soul mate” all will be well—instead, this expression of singleness can witness to the need for Christ’s perfecting work instead of finding the perfect mate. John Wesley is the guide through this chapter.

The fifth chapter addresses the contentious topic of those same-sex attracted. Bennett does well to recognize the tensions both with language for the LGBTQ community and moral disagreements about same-sex sexual practices. She brackets this out, however, to move to the importance of this community for the church and how the church has often missed the gift of this group’s witness. Learning from guide, Aelred of Rievaulx, she argues that this community can teach the church about the depth of same-sex friendships, especially. This pushes against Freud’s over-eroticism of all relationships, the idolization of marriage, and the quest for freedom as independence from needing others.

Chapter six discusses widowhood in dialogue with Elizabeth Ann Seton. This community witnesses to the dependence believers should have on Christ, especially in the face of uncertainty and the sting of death. Bennett reveals the especial hiddenness of this group, as well as the clear scriptural mandate to care for the orphans and widows.

The seventh chapter moves into divorce which can teach Christians of the “nature of hope and the grace of God” (p. 157). She observes the lack of Christian writing on divorce, concluding that this is because it disrupts Christian idealization of marriage and because it assumes failure. Those who have experienced divorce, for whatever reason, can attest to God’s mercy and grace. Stanley Hauerwas is the guide for this chapter.

The eighth and final chapter addresses single parenting with Dorothy Day as the guide. This chapter highlights the problems with a two-tiered parenting hierarchy in which those who parent perfectly are on the first tier and those who do not are beneath them. Since single-parents are already understood to be imperfect and less than ideal, they are automatically relegated to this second tier which is shame-laden. This is not only inaccurate, but this group can also teach the church about the need for God’s sufficiency often even better than dual-parent homes.

The general strengths of this book are its accessibility, clarity, attention to nuance, and willingness to be prescriptive. Bennett writes so that an average reader can understand her arguments, often citing blog posts, statistics, and including narratives, especially of her guides. Her writing is clear and her structure within each chapter is consistent. She also pays attention to the additional disparities that race and gender (especially in single-parent and widowed contexts) introduce into these single states, helping reveal further complexities of singleness. Finally, while she uncovers many of the problems in American culture and in the American church, her project is still constructive. Each chapter concludes with practical endorsements for how to counter-act the prevailing cultural messaging and values.

The areas for improvement regard the theological aspects of this work. For instance, throughout the work the author refers to “being human,” often connecting relationships to this anthropology. However, nowhere is the undergirding anthropology stated even though it is frequently assumed (pp. 19, 57, 65, 72, 77, 78, 79, 80, 81, 103, 106, 113, 116, 118, 125, 201, 205). Also, discussion of Jesus’ singleness was surprisingly absent from the discussion and would have likely bolstered Bennett’s argument. Further, the New Testament attestation to the importance of spiritual kinship over blood or marital kinship is only briefly discussed and would have strengthened a theology of singleness as well. Thus, for this work to be a “new theology” more needs to be said.

In conclusion, perhaps a more accurate subtitle would have been “theological reflections on the single life,” but this should not minimize the importance of those reflections for both the individual or the church. I would recommend this for any Christian reader thinking through marriage or singleness.