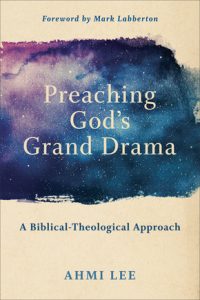 An experienced pastor and worldwide preacher, Ahmi Lee is Assistant Professor of Preaching at Fuller Theological Seminary in Pasadena, California. Her first book, Preaching God’s Grand Drama, is a timely, theologically rich contribution to the field of homiletics. While other works, such as Eric Brian Watkins’ The Drama of Preaching, have explored the dramatic dimensions of preaching in relationship to the redemptive-historical narrative of Scripture, Lee builds on the work of Kevin Vanhoozer and others to present a theodramatic homiletic in conversation with prevailing models of preaching. Specifically, the book reflects Lee’s experience of feeling “caught” between two competing paradigms of preaching: “the text centered, so-called traditional preaching” model and “the reader-centered, conversational mode of preaching” (pp. 1-2). Preaching God’s Grand Drama is her attempt to draw upon the best of these two models to articulate a third way: theodramatic preaching, an integrative model of preaching that invites the Church to participate in God’s past, present, and future action in the world.

The book is arranged into six chapters. The first chapter articulates and assesses the traditional homiletic. For Lee, the traditional homiletic is typically a deductive mode of preaching that linearly teaches propositional truth. While mindful that she is sketching a kind of “homiletical caricature,” she states the traditional homiletic’s assumptions can be captured in four metaphors: the herald, a banking transfer, a golden key, and a still-life picture (p. 9). Lee goes to great lengths to articulate the gift of this rich preaching tradition, especially noting its “unfaltering trust in God’s communicative ability to reveal himself and minister to his people through the reliable witness of Scripture” (p. 29). Still, she notes that this model is not without its potential weaknesses and dangers, such as misusing authority, cultivating an insular church culture, and delimiting sermonic forms.

In chapters two and three, Lee surveys and critiques what she labels as the conversational homiletic, a view of preaching as “a shared ministry of the church” based on a communal meaning-making process (p. 51). Drawing on Lucy Rose, John McClure, and O. Wesley Allen as recent exemplars, Lee traces how the conversational model of preaching grew out of postmodern epistemological shifts and the emergence of the New Homiletic, a movement within homiletics that emphasizes the role of listeners, favors inductive approaches to preaching, and highlights how language constitutes reality (p. 36). Despite the diversity that exists among these figures, she argues they each propose a view of preaching that prioritizes social location, subjectivity and experience, and a decentralized pulpit (p. 52). Lee applauds several aspects of the conversational model, such as how it takes large-scale cultural changes seriously and insists that hermeneutics should be a hospitable practice. However, she offers a strong and substantive critique of the conversational homiletic’s lack of confidence in Scripture’s ability to authoritatively convey meaning and its reliance on a “community of readers to generate meaning from their experience of the text” (p. 77).

Preaching God’s Grand Drama is a wide-ranging, substantive theological account of preaching as a theodramatic practice. In less than 200 pages, Lee offers a clear, balanced, and nuanced treatment of the drama of preaching in the context of major contemporary homiletical models, the changing Western epistemological milieu, and prominent theological voices on theology and narrative. In addition, while unable to provide an extensive biblical and historical foundation for her proposal, Lee offers several illuminating Scriptural soundings throughout the book as well as intriguing brief allusions to figures in the history of preaching (e.g., pp. 7, 87, 126, 130, 151-152). While some may quibble with Lee’s presentation of the traditional and conversational preaching models, in general, her work is fair and judicious—especially given the careful qualifications she makes throughout the book. Of course, Lee’s engagement with a diversity of perspectives by necessity limits her exploration of some voices and traditions. For example, while the book does briefly mention African American preaching in relationship to conversational preaching, a future project might explore how African American preaching traditions could enrich the theory and practice of theodramatic preaching (p. 37). As James Earl Massey asserts in Stewards of the Story (Westminster John Knox, 2006), the Black church has often conceived of preaching as “telling the Story.” Furthermore, while Lee acknowledges that issues of “methodology, sermon forms and language, and delivery” are outside the scope of her present study, a sample of a theodramatic sermon would have coupled well with her stimulating insights and questions in the concluding chapter of the book (p. 5).

Preaching God’s Grand Drama is an important work that proposes a fresh paradigm on preaching that is biblically alert, historically aware, and theologically anchored. Pastors, preachers, theologians, and students of all backgrounds will benefit from Lee’s insightful treatment of preaching as a thoroughgoing theological practice. Students will particularly find the book a helpful introduction to some of the major theological assumptions that undergird traditional and conversational preaching models. For example, Lee’s informed and respectful delineation of potential weaknesses and dangers of the traditional homiletic will be sure to stir reflection among those who are not prone to critique expository or expositional preaching models. Likewise, her extensive assessment of conversational preaching will be invaluable, especially for those who may not be familiar with this model of preaching and some of its philosophical and hermeneutical assumptions. Students who are acquainted with Kevin Vanhoozer’s scholarship, especially his response to George Lindbeck’s cultural-linguistic model of theology in The Drama of Doctrine (Westminster John Knox, 2005), will likely get the most out of Lee’s creative and theologically robust proposal for a theodramatic homiletic. However, there is something for every thoughtful listener or preacher of sermons in this fine work. In short, Lee’s exemplary book opens up new forays for understanding and practicing preaching as a dramatic act in the unfolding story of God. 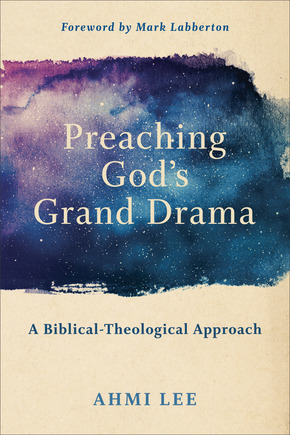