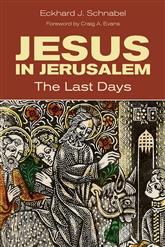 In Jesus in Jerusalem, Eckhard Schnabel, Distinguished Professor of New Testament at Gordon-Conwell Theological Seminary, analyzes the historical events of the last week of Jesus’ life leading up to his death, burial, and resurrection. In five total chapters, he analyzes these events by exhaustively surveying what we know about the seventy-two people in the Gospel accounts (Chapter 1), the sixteen places mentioned in or around Jerusalem in those accounts (Chapter 2), the timeline for each of the events (Chapter 3), and, beginning with the anointing at Bethany, the twenty-four events that appear in one or more Gospel account (Chapter 4). Chapter 5 summarizes five theological conclusions from the study: Jesus as the Messiah, Jesus and the temple, Jesus’ death, Jesus’ resurrection, and Jesus’ mission and that of his followers. Of the five chapters, it is natural that Chapter 4 is by far the longest (over two hundred pages).

It may prove helpful to provide a sample of Schnabel’s decisions on the major issues in Gospels scholarship. Schnabel contends that the Last Supper was a Passover meal, and that the chronological discrepancy between the Synoptic Gospels and John is most plausibly explained by suggesting that the Passover “was celebrated on two subsequent days, with both days deemed to be Nisan 14 by the celebrants” (p. 147). Also, on the evidence from the beginning of Tiberius’ reign (AD 13; cf. Luke 3:1), the forty-six-year-long reconstruction effort of Herod’s temple (beginning in 20/19 BC; cf. John 2:20), and the likelihood that Jesus’ public ministry lasted three years, Schnabel suggests Jesus died in AD 30 (p. 140). Finally, Schnabel suggests that Jesus’ prophetic action in the temple did not critique the temple or the sacrifices per se but symbolically predicted its destruction due to the salvation-historical reality of the messianic age dawning (pp. 159–65).

The strengths of the book lie in its format and historical method. The format is encyclopedic; the reader can easily find the person, place, or event of interest, for each is presented either chronologically or in the order of their appearance in the narratives. For instance, if the reader wants to know more about the high priest’s servant Malchus, they could easily locate the relevant information; Malchus is listed as Person #54 at the outset of Chapter 1, and the full description appears in the proper place later in the chapter (pp. 82–83). The format can be minorly repetitive; for instance, we are told four times (corresponding to the number of named disciples in the conversation) which of the disciples wanted to know when the temple would be destroyed (pp. 19–22).

The format of the book also includes tables, figures, and excurses. Included in the tables is a suggested chronology of the events of Jesus’ last week in Jerusalem (pp. 150–51). Schnabel’s reconstruction of the events on Easter Sunday morning is outstanding. He lists the events by chronological groupings and portrays three scenarios via three tables—one of which is mapped out—for the possible geographical movements of Jesus’ disciples that morning (pp. 354–59). Also helpful is the drawing of Jerusalem in AD 30, replete with the names of specific places and structures in and around the city (p. 106). Finally, readers will find helpful the thirteen excurses throughout the book that explore in more detail relevant historical information, such as the historicity of Annas’ interrogation of Jesus, what constituted a crime against the emperor, and Pilate’s custom of freeing a prisoner at Passover in light of Roman legal precedent.

Schnabel’s historical method is exemplary. He contends at the outset that “historical Jesus” scholarship should take seriously the Gospel narratives, for they are “the only accounts that provide us with sustained information about Jesus” (p. 7). Following the lead of Richard Bauckham and others, Schnabel treats the Gospel accounts as based on eyewitness testimony. He thus assumes that the accounts are historically reliable and, despite apparent discrepancies, should be harmonized if possible.

Schnabel also rigorously analyzes the events of Jesus’ last week in Jerusalem in light of Jewish and Greco-Roman history and culture. As evidenced by the book’s copious endnotes—they comprise almost two hundred pages, with Chapter 4 alone including 1,182 endnotes(!)—Schnabel leaves no historical stone unturned. For instance, he concludes that, apart from violations of the temple, the Sanhedrin did not have jurisdiction in capital cases in Roman Judea, that Jesus’ trial before the Sanhedrin was not illegal on account of its “consultative function,” and that Jesus was plausibly tried and condemned by the Sanhedrin as a mesit and maddiakh—someone who teaches heresy and turns Israel away from God (pp. 242–49).

The book’s rigorous historical focus is its strength and, potentially, its weakness. Gospels scholarship can tend to produce literary “readings” of Gospel narratives that are historically implausible. Schnabel counteracts this trend by reminding us that the Gospel narratives are rooted in history. At the same time, the book can potentially mute the literary-theological aims of the Evangelists. Two examples will suffice. In John 19:14, Jesus is said to be crucified at the twelfth hour (12pm), whereas Mark 15:25 says he was crucified at the ninth hour (9am). The traditional explanation of this discrepancy, which Schnabel supports, is that both are round numbers in the Jewish reckoning of time and therefore are both accurate—Jesus was crucified mid- to late-morning. Historically, this is a compelling explanation, but might there also be a literary-theological explanation? Here various interpretations could and have been proffered (e.g., Jesus was crucified when the Passover lambs were sacrificed), but the point is that the Evangelists can recount the narrative in a historically accurate way while at the same time making theological claims. To use another example, when Jesus says “I thirst” on the cross (John 19:28), Schnabel makes the point that by this time Jesus would have been severely dehydrated, which explains his request. This is surely correct historically. But then Schnabel warns that “Jesus’ thirst should not be trivialized by symbolic interpretations” (559n985), such as connecting Jesus’ request to his earlier Johannine teachings about his being the source of living water and eternal life. While Schnabel is surely right to be cautious against historically implausible readings, it should be noted that historical and literary-theological analysis of the Gospel narratives are not at odds; both are necessary for interpreting rightly their significance.

Jesus in Jerusalem will be especially helpful for church leaders. Given the prominence of the passion narratives for the Christian faith and in the Christian tradition, Schnabel’s work will help church leaders and their congregants grasp the historical features of the narratives in order to discern more fully the significance of the death and resurrection of Christ.