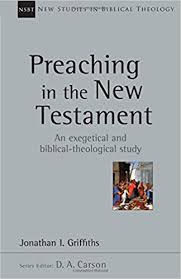 Jonathan Griffiths serves as the Lead Pastor of Metropolitan Bible Church and is on the council of The Gospel Coalition Canada. He has published a number of books, including Hebrews and Divine Speech in 2014. His latest contribution, Preaching in the New Testament: An Exegetical and Biblical-Theological Study, examines the nature of preaching in the New Testament and asks whether preaching should function as a distinct word ministry in the post-apostolic church.

At the outset of the book, Griffiths states that his interest does not lie in discussing homiletics or dissecting New Testament sermons to inform contemporary sermon formation. The primary goal of the book is to determine if the New Testament mandates “preaching” as a distinct ministry of the word, and, if so, what might characterize and distinguish preaching from other word ministries. After a brief introduction, Griffiths divides his work into three parts.

The first section addresses two objections. It asserts a biblical theology of God’s word, and it surveys the three key terms used to describe the concept of preaching in the New Testament. Griffiths also includes a brief excursus that explores the identity of the preachers in Philippians 1:14-18. Griffiths concludes that the New Testament contains three semi-technical verbs to describe preaching, and these verbs are not “used anywhere in the New Testament to frame an instruction, command, or commission for believers in general to ‘preach’” (p. 36). Preaching, then, is a specialized ministry only to be performed by duly authorized individuals although, as chapter 3 explains, all believers should participate in other types of word ministries.

Griffiths seeks to ground his conclusions from Part I in a series of exegetical studies in Part II of the book. Chapters 4-9 form the heart of the book, and Griffiths surveys various passages from 2 Timothy, Romans, 1 and 2 Corinthians, 1 Thessalonians, and Hebrews, with an excursus on the relationship between New Testament preaching and Old Testament prophecy. In chapter 4, Timothy emerges as an important figure for Griffiths argument because he represents both a model of non-apostolic preaching ministry and a bridge from the apostolic era to the post-apostolic era. Paul’s commissioning of Timothy with authority to proclaim God’s Word in the church indicates that preaching did not end with the apostles, but rather Timothy stands “in a line of continuity with [Paul] and his own apostolic preaching” (p. 60). Having established this crucial point, Griffiths then proceeds to unfold the nature of Christian preaching in chapters 5-8 by analyzing the preaching of the Apostle Paul. Finally, chapter 9 considers the book of Hebrews, the “only full-length sermon recorded in the New Testament” (p. 117). This chapter brings the book back to the beginning when Griffiths offered a biblical theology of the word of God. Significantly, Griffiths argues that this theology underscores the importance and even necessity of preaching in the post-apostolic church as exemplified by how the writer of Hebrews views his own preaching.

Part III consists of only one chapter where Griffiths offers a summary of the work and some conclusions, both exegetical and biblical-theological in nature. He concludes that “the public proclamation of the word of God in the Christian assembly has a clear mandate from Scripture and occupies a place of central importance in the life of the local church” (p. 133).

A second criticism involves the inclusion of chapter 1. While certainly the opening chapter is helpful in developing a sound theology of God’s Word, its contribution to this volume is questionable. Griffiths seems to include this chapter to guard the reader from “concluding that all the theological features we will find in the New Testament’s presentation of preaching are unique to preaching” (p. 9). Protecting readers from this false conclusion is a worthy goal, but it could have been done in a shorter space than an entire chapter that seems somewhat disconnected from the overall goal of the book. Griffiths does return to his assertions from the opening chapter when he discusses Hebrews in chapter 9. The connection, however, is muddled by a failure to show how preaching in Hebrews functions differently from all word ministries if all word ministries share the characteristics found in the Hebrews sermon. Perhaps the reader would have been better served if Griffiths had included an epilogue or a section in his conclusion making this point. Chapter 9 and the book as a whole would have been stronger. As it stands, the first chapter seems to stall the momentum of the book and feels out of place and out of context.

These structural concerns related to chapters 1 and 9 are part of a larger critique, which is the structure of the book as a whole. Reading the book feels repetitive as chapter by chapter Griffiths makes similar if not identical points to the ones made in the previous chapters, just from different texts. For example, excursus 2 connects New Testament preaching with Old Testament prophecy. Chapter 5 (on Romans 10) has a section where Griffiths argues that preaching “stands in a line of continuity with Old Testament prophetic proclamation” (p. 69). Chapter 7 (on 2 Corinthians 2-6) concludes with a section entitled, “New-covenant preaching ministry has affinities to old-covenant prophetic ministry” (pp. 93-94). Chapters 5 and 10 both argue that preaching must be done by commissioned or approved agents. The reader might be forgiven for thinking he is retreading already covered ground. The repetitive nature of the chapters, although covering different texts, can make it difficult to keep the reader’s interest, especially if earlier chapters or excursuses were convincing of the argument being made (or repeated).

Overall, these criticisms are minor and involve the structure of the book more than the content of it. Griffiths’ content on the whole is helpful and grounded in sound, biblical exegesis. He helpfully reminds readers that the preaching of the Word of God is not merely a public oration like a political speech or philosophical discourse, but the sending of an authorized agent of God to speak His Word to His people. In contemporary church culture where seemingly anyone who feels “called” to pastor a church can plant his or her own church and become a preacher, Griffiths reminder that preaching in the post-apostolic church was never meant to be a free for all is refreshing and much needed. After all, James 3:1 warns against many becoming teachers, and Griffiths book is a poignant reminder of why such warnings were given.

Anyone who is interested in preaching as a discipline or in what the New Testament teaches about the ongoing ministry of preaching in the Christian church will find this book useful. It is academic in nature, yet it remains accessible to all students of the Bible, whether they are in the academy or laymen wanting to improve their understanding of this subject. Those looking for works to improve their homiletics will not find help in this volume, but they will be reminded of the significance of their task as they preach the Word to God’s people.