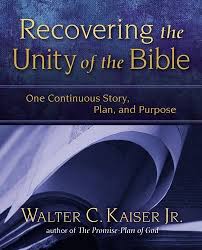 In Recovering the Unity of the Bible, Kaiser explores the connected questions of Scripture’s unity and argues that “the case for the unity of the Bible … rests on two main theses: (1) the self-claims of the Bible and (2) the message of Scripture” (p. 24). He contends for a unity to the canon that also recognizes genuine diversity as the canon grows from one part to the next with a common plan, purpose, and story in an organic progression (p. 218) that emphasizes a link between the promises of the OT and their fulfillment in the NT. As such, he leads his reader through a surprisingly detailed analysis of apologetic and interpretive issues related to the canon’s continuity and diversity that rejects imposing the NT upon the OT or adopting the common notion of sensus plenior (pp. 216–7). Kaiser seeks, instead, to thread an interpretive needle by keeping the meaning of OT texts bound to the intentions of their writing in grammatical-historical interpretation and also to the growing, progressive context of their placement within the canon by utilizing Hirsch’s distinction between meaning and significance, even as he levels partial criticism of Hirsch (pp. 79–80; 196–200). Kaiser unites the Bible, therefore, by emphasizing the promise-plan of God that engages the individual moments of the Bible in light of a progressive series that enables the preaching of the whole Scripture around the gospel and all of revelation.

In chapter 1, Kaiser tackles critical claims against the Bible’s unity by exposing how such assumptions of disunity mirror the prior eras’ assumption of unity (pp. 12–13). From this point, he contends for a diverse categorization of unity along a multi-layered front: structural, historic, prophetic, spiritual, and kerygmatic unity (pp. 20–24). Such analysis leads to chapter 2’s categorization of the corresponding types of diversity and chapter 3’s general guidelines for the most common means of harmonizing such.

In chapter 4, Kaiser provides a focus on the structural unity of the Hebrew Bible, while in chapter 5 he provides the same analysis for the New Testament. Kaiser employs leading scholarship to refute the most common apologetic arguments against the unity of each testament alongside its legitimate diversity.

Chapter 6, however, marks a subtle pivot towards the most important parts of Kaiser’s project. Specifically, he examines OT messianic promises and contends for a sensus literalis to the OT texts that leaves no space for a distinction between the human and divine author’s meanings but eases the resulting interpretive tension by partially accepting Hirsch’s distinctions between meaning and significance. Specifically, he focuses “special attention to what it was that connected: (1) the ancient prediction and (2) the New Testament fulfillment” (82). In short, it was and is a planned and purposeful series. He binds the meaning to a series of texts and events that finds its ultimate significance and renewed meaning in the NT fulfillment of these promises in Christ (pp. 82–84). This series gives purpose and meaning to each of its points without invalidating individual uniqueness. However, Kaiser fails to articulate the nature of the series as a purely textually phenomenon or one that moves between the text of the canon and the events of salvation history.

Chapters 7 and 8, then, allow Kaiser to more directly address the relationship between the testaments, creating intellectual space for a common message by refuting the most common critiques of the OT’s view of God and its primary human characters’ moral failings. From these recalibrations, chapter 9 highlights the question of the people of God across the Bible. While he conceives of the biblical writers advancing only one people of God (p. 125), his nuanced answer rejects “all reports of Israel’s death and demise as the people of God in every sense” (p. 125).

Chapter 10, therefore, moves to the consideration of God’s Kingdom as His program in both testaments. Kaiser contends for the Kingdom of God concept in “seed” form in the OT and full form in the NT with the Davidic covenant serving as the main way to link the series that continues in a present and future form so that it “is both a soteriological as well as an eschatological concept” (p. 140). Such a connection paves the way for chapter 11’s definition of Kaiser’s promise-plan paradigm, relating the different parts of his series around the promise of a Messiah and His arrival that branches into other theological concerns: law and gospel, mission and kingdom. The thread of promise plan, therefore, becomes the primary way for Kaiser to unite the Bible while respecting its diversity because it “it is broad and wide enough to embrace the numerous strands of topics that flesh out its plurality in unity” (p. 155).

From this approach, chapter 12 unites the doctrine of law across the canons, while chapter 13 joins together soteriology across OT and NT. He sees unity in both instances as they stand in the promise-plan series with meaning and significance for those who lived before and after the NT. Having bound law and gospel to both testaments, chapter 14 digs into the mission of God and His people in the OT. In particular, Kaiser unfolds the OT’s call for Israel and the nations “to hear about the Promised One who was to come and redeem the world from their sins” (p. 193).

Kaiser, then, turns to the question of unity in hermeneutical methods in chapter 15 and proclamation in chapter 16. Returning to earlier observations, he contends for principalizing OT texts through grammatical-historical interpretation that respects their ancient meaning and does not impose later meanings but does allow the natural growth of ideas within his promise-plan methodology (pp. 203–207). This approach, then, suggests that preaching itself must set its message in terms of the “overall plan, purpose and unifying story [of the Scripture]” (p. 218). He rejects finding Jesus in every verse, but he argues that one must apply each verse to the larger story so that it may proclaim all of the “revelation of God” (p. 218).

Kaiser’s argument builds cumulatively across many aspects of the interpretive dilemmas, but in the end he proves his thesis: the canon has a natural unity in what it claims of itself and its message, even if certain aspects of the unity prove contested and difficult. While he has not proven that his approach is the only or best approach to measure unity, his goal seems to be much smaller and more helpful. Indeed, the strength of the book is not a singular conclusion to how the Bible’s unity should be considered but in exposing how much of theology and interpretation hinge on how we consider this question. Kaiser shows, in other words, that the unity of the Bible impacts our assumptions, methods and conclusions. After reading this work, his readers will be far better prepared to hold the Scriptures together.