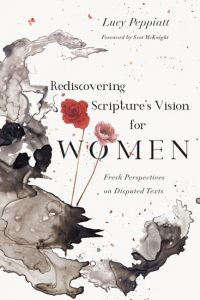 Lucy Peppiatt is Principal of Westminster Theological Centre, UK. Rediscovering Scripture’s Vision for Women is her fourth monograph, building on, expanding, and bringing to a wider audience her previous scholarly work on women in 1 Corinthians 11-14. Winner of the 2019 IVP Academic Reader’s Choice Award, the book provides an accessible and succinct biblical and theological case for the full equality and inclusion of women in the home, church, and ministry.

Peppiatt notes that her aim in writing is, as the title of the book suggests, that “those who read it . . . will catch a vision of God’s gracious will to set women free” (p. xiv). Consistent with that aim, the book offers a positive and constructive presentation of the case for the full inclusion of women. It is wholeheartedly and unashamedly “mutualist” (p. 6) (a term Peppiatt prefers to “egalitarian”)—arguing that the “overturning of an entrenched patriarchal order” (p. 2) is not just permitted but is endorsed by scripture. This is not to say that Peppiatt is naïve to the weight of church history, the persistence of hierarchicalist views and practice in the contemporary church, nor to the role of the bible within such arguments and practices. And yet she remains convinced—mutualism is not driven by culture, but the opposite: “In this book I argue that those of us who see the overturning of male dominance in the Scriptures are rediscovering an ancient message that has been overlaid and distorted by years and years of reading, teaching, preaching, and writing by those who assumed that the patriarchal world they lived in, which they sometimes saw reflected in the Bible, was the one that God had ordained” (p. 5).

This book is broad-ranging, addressing socio-cultural, hermeneutical, exegetical, and theological issues across the whole sweep of the bible. At the same time though, it is remarkably focused and, in places, quite detailed. Peppiatt does not avoid the hard questions or contested texts but tackles them with confidence and rigour.

Chapter One considers the male-centred nature of historic Christianity and its impact on women, including male language for God, the maleness of Jesus, the twelve male disciples, and whether the Trinity tells us anything about how men and women should relate. Peppiatt traces the damaging impact of the privileging of maleness in Christian history, theology, and the history of interpretation, largely through an improper concretising of God’s accommodation in revelation. She reminds us simply that “God reveals himself through a man, but he is not, of course, merely a man” (p. 17). Metaphor and anthropomorphism in revelation tell us “something profound, true, and meaningful about God, but . . . does not and cannot tell us all that we can know” (p. 17). True to the rationale of the book, Peppiatt then goes on to revive and remind us of the stories of the female and the feminine that lie alongside these privileged narratives. She points to the profound strength and resilience of women across the ages, and to the power of the Christian gospel to cut through Christian culture: “one of the reasons for the deep attraction and appeal of Christianity to women is rooted in a profound instinct that we are not really excluded after all, despite what outward circumstances tell us” (p. 11).

Chapter two draws in more detail some of the stories of women in the scriptures: Mary the mother of Jesus, and women as “disciples, patrons and witnesses.” This leads on to a discussion of what it means to be baptised into Christ, and part of the “one new humanity” (Eph 2), drawing out not just the personal but the concrete social and corporate implications of this new reality. Here Peppiatt draws on a range of New Testament texts (Eph 2; Phil; 1 Cor 11; Gal) and commentators, particularly John Barclay’s work on Galatians. Regarding the problem of the “particularity” of Jesus, Peppiatt notes that this applies to all people, not just women (“In an important way, in all his particularities, Jesus of Nazareth was unlike the majority of the entire human population that has ever existed,” p. 40). But again, Peppiatt presents not just a defense but a positive vision: “Jesus of Nazareth stands for the one the Jews believed had all the honor and privilege before God—the free Jewish male. That women, slaves, and children were set free to identify with a free Jewish male in the temple of God, communicated to them that they too held the place of highest honor in the closest proximity to God” (p. 40).  She emphasises an understanding of salvation in participatory terms, meaning therefore that “there is nothing in Christ that is other to woman, and nothing in woman that is alien to Christ as they are made for union with one another” (p. 42).

Chapter 3 examines the creation stories and how different readings yield radically different results in terms of how we perceive a woman’s natural place in creation, the family, and society. A particular strength of this chapter is its demonstration of how different biblical texts (here Gen 2 and 1 Cor 11:2-10) can be unreflectively “mutually interpreting,” their exegetical results unravelling once a particular hermeneutical spiral is broken. Peppiatt is unflinching in naming the implications of finding “headship” theology in Genesis 2 (men are closer to God, women relate to God through men (p. 47)), and competently presents the (now quite well known) flaws in this reading, highlighting the implications for our interpretation of NT texts (1 Cor 11:2-16; Eph 5).

Chapter 4 takes up these NT texts and explores the meaning of headship (kephale) in more detail. This chapter condenses (and in parts reproduces) Peppiatt’s earlier publications on 1 Corinthians 11:2-16, and 1 Corinthians 14. Those who were unconvinced by Peppiatt’s account of Paul’s rhetorical strategy there (that verses 7-9 do not represent Paul’s own view but that of his opponents), will likely remain so here. However, the discussion is detailed and well-informed, the argument is well-made, and represents some of the closest and most recent scholarship on this text, even as it remains controversial. Peppiatt’s survey of the limitations of traditional interpretations, and discussion of the text’s difficulties is insightful and worthwhile. Even if her preferred reading does not convince all readers, the textual difficulties she aims to address remain, as does her basic point that any reading depends on interpretative choices.

Chapters 5 & 6 deal with the New Testament theology of marriage. Moving on from the previous discussion about kephale, these chapters include discussion of the NT household codes, Phil 2, and the role of the doctrine of the Trinity in a theology of marriage. Peppiatt examines the hierarchicalist view presented by Tim and Kathy Keller in their popular marriage book The Meaning of Marriage (chapter 5), before presenting her case for the mutualist view (chapter 6). Here she offers a reading of the household codes that demonstrates the radically redefined role of the Christian husband as self-sacrificial in order to empower others, which she describes as (in the first-century context) “a marriage of equals among unequals” (p. 109).

Chapter 7 examines the role of women in the New Testament church, asking (as Scot McKnight repeatedly asks us to): what did they do? Peppiatt argues that the New Testament describes multiple women who functioned as leaders, as prophets, apostles and teachers. It tackles hermeneutical questions about how to “apply” these texts to today’s debates about leadership “offices” such as priest, bishop, etc., before turning to ecclesiology and Paul’s body metaphor (1 Cor 12) and the implications for priesthood as “a mediating and representative role” (p. 138). Peppiatt draws out the way that male bias in translation and interpretation has distorted what has been visible to us in scripture.

The final chapter (Chapter 8) deals with what is perhaps the most common—and often considered the most decisive—objection to women’s leadership in the church: 1 Timothy 2:8-15. Peppiatt notes the persistent problems with a “plain reading,” and outlines contemporary work (including scholarship on the Artemis cult by Gary Hoag and Sandra Glahn) that might account for its most problematic elements, whilst also providing a reading of Paul here more consistent with his teaching and practice in other texts. But this text is left till last as Peppiatt argues (as she has throughout) that our readings of it are in part “determined by what we bring to the text” (p. 140)—the consistent story that we see the bible telling, and the way texts are “mutually interpreting.” In other words, there is no such thing as a “plain reading.”

Peppiatt’s book covers a lot of ground. It hits all the key texts and theological issues. That it does so in 150 pages makes it at once accessible and widely useful, but simultaneously open to critique from those who will want more depth or detail. But, this is not the aim of the book. It provides a broad sweep and a grand vision, laying out a positive case for the mutualist view. As an attempt to present a consistent picture throughout all of scripture it is necessarily broad.

An important achievement of the book is its insistence on the mutually interpreting nature of scripture on this issue: its reminder of how the parts relate to the whole and the whole to the parts. For those who insist then on coming at this issue through one text, or even one theological category, it will likely not be convincing (though I hope it might be challenging). But, as Peppiatt continually reminds us, these interpretative moves are a choice, and “at the end of the day, each of us must take responsibility for our own reading, interpretation, and application of scripture” (p. 158). At the very least, the book puts the lie to the claim that mutualists (or egalitarians) do not take scripture seriously. Peppiatt reads the bible as scripture and works hard to faithfully and theologically interpret it. She makes use of respected New Testament and theological scholarship (including her own), though the book is clearly intended to be accessible to a non-academic audience.

If I could go back in time, this is the book I would give to my 17-year-old self when I first encountered these questions. 20+ years later and with my own views now securely settled, this book still provides powerful encouragement and hope. 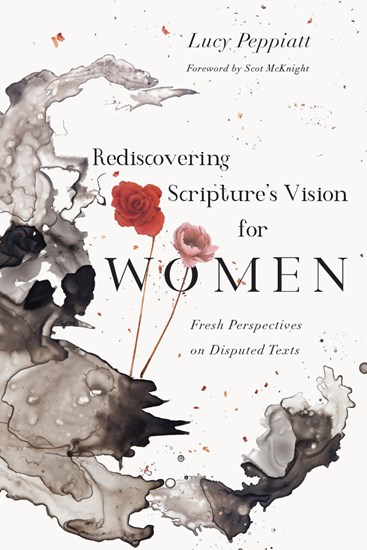