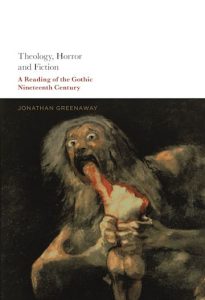 Dr Jonathan Greenaway is currently a Researcher in Theology and Horror at the University of Chester. He is working on a Templeton Religion Trust-funded project to explore the theological importance of all forms of horror media. His background in literary studies, and Gothic fiction in particular, appropriately underpins the conceptual framework for this book, which arises from his doctoral studies at the Manchester Centre for Gothic Studies.

The book is made up of five substantive chapters plus an introduction to ‘Gothic and Theology’ (as opposed to ‘Religion’) and a brief conclusion. Greenaway’s aim is to reposition critical understandings of the role of theology in Nineteenth Century Gothic writing, which in his view have been neglected in recent literary studies. He suggests that Gothic fiction may be read as engaging with theological positions in a variety of ways which are generative of new ideas in the fields of both theology and Gothic studies. Greenaway argues that taking an approach of ‘theological hospitality’ towards these texts opens up a productive dialogue, contributing to an understanding of their contexts as well as informing theological issues of significance today.

In Chapter 1, Greenaway considers the relationship between Mary Shelley’s Frankenstein and Milton’s Paradise Lost. He suggests that Shelley’s focus on the key themes of evil and salvation, when considered theologically through the intertextual lens of Paradise Lost, indicates the novel offers a critique of the notion of the creative impulse of the Romantic genius. The novel offers new ways to think about the ‘Other’ in the self-understandings of Victor and his creature. It is because Victor refuses to accept his responsibility as creator that his creature becomes monstrous, alienated from the community which would fulfil his subjective needs. The Romantic search for transcendence in the sublime is shown to be creative but dangerous when distanced from the grounding offered by a theology of creation.

In Chapter 2, the significance of the Calvinist theology at the heart of James Hogg’s The Private Memoirs and Confessions of a Justified Sinner is reassessed, in light of recent critical studies which focus on the psychological rather than the theological in the novel. It is suggested that a Calvinist understanding of divine revelation, focused on a fixed view of the Word, is shown to provoke terror when confronted with the instabilities and dangers expressed in such Gothic literature. For Greenaway, ignoring the theological dimension of the text’s shifting presentation of Robert Wringhim’s experience is to lose a profoundly significant aspect of the novel.

Chapter 3 considers the novels Wuthering Heights and Jane Eyre, with a focus on the theological perspectives offered in each, unorthodox though they may be. In the first of these novels, the fallen nature of material existence is presented and within that, radical alternatives to a Christian ‘heaven’ and ‘hell’ are explored. Greenaway suggests that Hareton and the young Cathy ultimately offer a hope for the future which is theologically aware of the fragility of the boundaries between the profane and the sacred, and the past and the present. In the second novel, the generic Gothic image of the trapped woman is presented in the narrative of Jane Eyre’s life. When read for its theological meaning, a variety of theological positions are challenged and found wanting (such as that of the Rev Brocklehurst), but the resolution is one in which liberation through sacramental marriage is possible for Jane. Crucially, Greenaway suggests that the concerns of these novels go beyond the purely material or psychological, and that their engagement with theological ideas speaks to the modern as much as to the original reader.

The Victorian Gothic ghost story is the focus of chapter 4, the shortest in the book.  Greenaway offers readings from a sample of stories from across the period, and argues that a space for theological reflection is opened up when the presence of ghosts in a narrative creates supernatural uncertainty.

Finally, in chapter 5, three key texts from the fin de siècle period are considered: Stevenson’s The Strange Case of Jekyll and Hyde, Wilde’s The Picture of Dorian Gray and Stoker’s Dracula. Greenaway interrogates the value of reading degeneracy in evolutionary terms as the underlying philosophical category in these texts, as a response to growing secularism in society. In each case, Greenaway presents theological language and ideas as having valence and significance, even if only, as in Wilde’s text, to be shown to be unfulfilling and inadequate. For Stevenson, tentative hope is offered in the Pauline understanding of the human condition which Jekyll rejects, with fatal consequences. For Stoker, the eclectic drawing together of dispirit theological ideas suggests that materialism alone is not sufficient to overcome evil. However, here the possibility that religion may be complicit in violence is also stressed in a way which speaks to readers today as well as at the time.

Greenaway’s book is impressive in its scope and engagement with the literary texts it interrogates. Throughout, the work of significant contemporary theologians, such as David Brown and Rowan Williams, is brought into productive dialogue with the texts and with literary critics. This is a truly interdisciplinary thesis, and offers a powerful counter-voice to those readings of literature which deny or ignore theology as a hermeneutical approach or category of meaning. Often, this is born out of ignorance about theological perspectives such as Calvinism, or Augustinian theology, but here Greenaway proves himself to be well-qualified to discuss and apply these theological frameworks.

In some of the chapters, there is strong dependence on the work of others, such as that of Alison Milbank in the chapter on Hogg’s Confessions. The claim that theological concerns have been side-lined is perhaps less well-established here than in other chapters. A psychological approach is certainly present in much recent work on Hogg, but the centrality of Calvinist theology remains a strong area of academic interest. The decision to focus on the works of Calvin, rather than on later developments in Calvinism, is understandable in light of the pressure of the limits of the chapter, but it does lead to a slightly skewed view of the unwavering significance of the uninterpreted divine Word in the Reformed Church. A Reformed belief in the presence of the Word of God in the act of preaching, for example, or of the role of the Holy Spirit in the understanding and application of Scripture, is rather underplayed here in order to highlight the fear-inducing role of the unmediated Word. The fierce debates around antinomianism in the Church of Scotland in the Eighteenth Century reveal both the contingency and the importance of biblical interpretation itself in Reformed theology, which the novel might also be read as exploring (as many critics have).

One of the book’s strengths is its engagement with David Brown’s work on natural theology and the arts. Brown’s emphasis on the interdependence between the two, which envisages art as revealing something of God for the age, to which the church responds and adapts, is powerful and positive. Gothic literature in particular is shown to have much to offer the church in this sense, through its challenges to established beliefs as well as to the way it leaves open the possibility of the supernatural. If Greenaway had more often offered examples of this process at work, in the church and in individuals, the thesis would have been even more convincing. His drawing back from identifying ‘church’ in this debate with any specific denomination might be viewed as a missing link in an otherwise theologically confident argument.

The book makes a strong contribution to literary and theological studies of the Nineteenth Century, and to the study of Gothic across the period. Its emphasis on the pervasive influence of the language and perspectives of theology is an important corrective to some recent readings of these texts. Some readers from outside the field of theology and biblical studies might find its strongly apologetic tone somewhat overplayed and unconvincing. However, it offers a detailed introduction to Gothic literature for those whose knowledge is limited, through its readings of key texts in the field such as Frankenstein, Dr Jekyll and Mr Hyde, and Wuthering Heights. It also introduces theology students to scholars working in the interdisciplinary field of literature and religion/theology, such as Alison Milbank, Malcolm Guite, Paul Fiddes and Terry Eagleton, while offering those more familiar and specialised in the field a sustained and developed argument to consider. The bibliography does not include all of the texts referred to in the body of the text, which is somewhat disappointing and to be noted, particularly if a reference within the text is of further interest.

Overall, Greenaway’s monograph is a model of interdisciplinary scholarship which will enlighten those working in a variety of fields. But its particular strength lies in its application of theological categories to the literary criticism of Gothic texts which may open up new areas of interest for theologians of the Nineteenth Century.

School of Divinity, University of Edinburgh 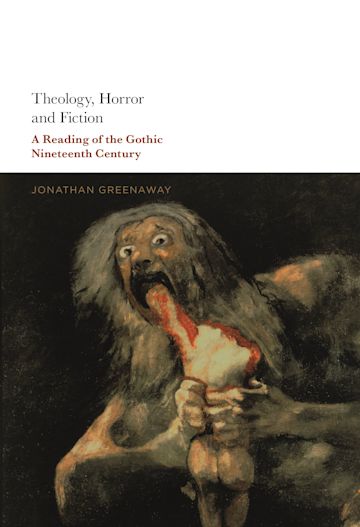