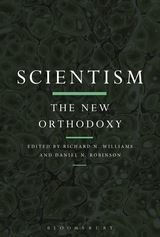 As anyone in the academy will admit, the natural sciences have been extraordinarily successful. That success translates over into wonderful (even if sometimes dreadful) technological innovations: the light bulb, GPS, laptops, transportation, iPhones, vaccines, atom bombs, television, the Internet, the plane, telescopes, et al. The list is long and growing. The methods of science appear to be so powerful that some thinkers begin to ask themselves the following questions. What if one needs the sciences to really know anything at all? What if other disciplines have been using methods that do not lead to knowledge? Why is it that the sciences have a marked history of measurable progress that the other disciplines do not have (and if they do have it, why does it take so long, and why is it so small and inconsequential?)? If the methods of science have been this powerful, why are not such methods used in all domains of inquiry? Thus, if the sciences are the only way to have real knowledge of the nature of reality, then other disciplines seem to have two choices: either gradually go extinct (or fade into obscurity) or adopt the methods of the sciences to remain academically relevant. Going extinct does not seem desirable and adopting other methods seems too Faustian. What are the non-sciences (or the soft sciences) to do? Well, thinkers are rightly pushing back. This book is an example of the push-back. Each academic contribution critiques scientism from a different angle. The book is not exhaustive (indeed, it cannot be) and so does not say everything that could be said against scientism. But it is an invaluable part of all that could be said against it. In the book, there are nine contributors, each pointing out a different way that scientism comes up short, including an excellent introduction from Richard M. Williams. Williams provides the reader with a helpful way each contributor approaches the new orthodoxy.

What is this new orthodoxy? The first step toward critiquing an idea is to understand it. Williams’ introduction provides four features of scientism: method, imperialism, hubris, and naturalism. First, method has to do with how a discipline goes about getting its knowledge. In this case, the method will be empirical, which is a method that confirms what one can see, hear, touch, taste, or smell. In itself, there is nothing inherently wrong with this. Things begin to go awry when one argues that if a discipline does not use the method, it is no longer scientific. The discipline thereby loses that honorific title. For example, the philosopher may partly base her belief in the existence of universals using a method of reasoning that cannot be confirmed by what one can see, hear, touch, taste, or smell. The new orthodoxy then disqualifies philosophy for not being scientific. And if not scientific, then not knowledge. Second, imperialism is the idea that the new orthodoxy become zealots and seem to go on a crusade against other disciplines to convert them to their methods (perhaps calling it a mission of mercy). To the extent that such disciplines adopt such methods is the extent to which that discipline survives within the University and the academic community. Third, hubris refers to the over-confidence scientism has in the power and applicability of science’s method(s). It is an over-stepping of the method’s boundaries, thinking that its ways can either solve all problems or show why an alleged problem (according to a non-scientific discipline) is really a chimera. For example, given scientism, a literary critic who becomes a scholar of John Milton, and spends her career interpreting Paradise Lost, will not have knowledge of Paradise Lost unless she uses the methods of science. But literary criticism is not a hard science, or even a science at all. Scientism then assumes that because literary criticism is not scientific, it is therefore not knowledge nor could it be objective. Finally, naturalism is the idea that there is nothing supernatural. There is no God, gods, spirits, ghosts, or anything outside space-time and whatever space-time contains. It will only make sense, then, for the methods of science to go along with such a picture, and investigate the nature of reality with that naturalistic backdrop in mind. Why is scientism called the new orthodoxy? According to Williams, it is because the view has a new air about it. It is not mere academic disagreement. It is a monopolistic claim. The very weapons of disagreement are (if not scientific) rendered impotent, and the very success of its method is itself reason to endorse its naturalism. It therefore threatens to colonize the academy with its methods, and force all the disciplines to subscribe to naturalism. Fortunately, scientism is seriously flawed.

The eight contributors provide the opportunity to touch on eight different ways to attack scientism (the book itself provides much more detail and many more ways). Daniel Robinson makes a case that scientific explanation and scientism do not sit well together. A scientific explanation involves reasoning from a set of data to a best explanation of that data. For example, suppose the car is not starting. Is the best explanation that there is something wrong with the car’s engine, or is it that aliens tinkered with the engine? It would certainly seem outlandish to prefer the alien-explanation over the engine-explanation; the latter explanation is simpler, it takes into account more of what we already know (and so on). Scientists use the same method on a much larger (or a much smaller) scale. But here is the issue. What assurance does scientism have that such reasoning will not go against naturalism? To keep it from doing this, scientism will have to frontload such reasoning with a method that automatically commits itself to naturalism. If it does this, scientism itself is not purely scientific anymore; the frontloading becomes a philosophical add-on. It would be like affirming the unintelligibility of the English language in the English language. The affirmation is cutting one off from what it wants to affirm; the frontloading cuts scientism off from its claim to be purely scientific.

Lawrence Principe calls attention to the idea that science is more of a friend to religion than it is to scientism. This is not good for scientism, which will want to ally itself with science and against religion. Principe points out that history shows science growing out of a religious context. Many scientists were religious. It may look like science and religion are at odds now. But they were not adversaries when science began. That did not come until later. Principe argues that the reason it came later was because the times had changed. The religious began to see their religion as threatened by science; and scientists began to see that religion was in the way of its progress. As science began to change the way we understand the world, it was but a short step to thinking that science should be the only way to know anything at all, with religious people stuck in the mud. This is a hasty generalization. It could also be that science and religion get along with each other just fine, and that the scientist and the religious began to view science and religion in a way that doesn’t do justice to the way science and religion related to each other in history.

P. M. S. Hacker compliments Robinson in that it is a further reason to think that scientism and scientific explanation do not go together. Where Robinson talk about frontloading reasoning to the best explanation, Hacker makes the case that successful scientific explanations cannot go to support a metaphysic. Hacker works from within the growing discipline of cognitive neuroscience. Thinking goes on all the time. Thinking involves neurons. Cognitive neuroscience studies what goes when we think, and now such neurons are related to thinking. Consider the question of whether or not we have free will, a question that has been studied by philosophers for centuries. If such neuroscientists gave a scientific explanation for why the neurons in our brain are the way they are, and then says that such an explanation settles the metaphysical issue of whether or not we have free will, that is scientism. It is scientism because it oversteps science’s boundaries. The nature of scientific explanation does not have anything to do with demonstrating a metaphysic. That is the job of philosophers.

Roger Scruton shows that scientism is incompatible with the methods of the Humanities. One of the methods involved in the Humanities is an appeal to first-person, subjective experience. This harkens back to what Swinburne was talking about regarding the irreducible reality of private properties: only the person in pain knows they are in pain. In the Humanities, one discovers cinema, music, literature, poetry, philosophy, history, literary criticism, etc. Take Leo Tolstoy’s War and Peace or Dante’s The Divine Comedy or Soren Kierkegaard’s Fear and Trembling or Thucydides’ The History of the Peloponnesian War or C.S. Lewis’ A Preface to Paradise Lost or Mozart’s Don Giovanni or Francis Ford Coppola’s Apocalypse Now. Scruton would say that such works of art, crafted by the private, subjective, first-person point of view of the artist bring about a world that science cannot get to with its methods. Such beauty and insight gets at something real and worthwhile about the human condition. They allow us to vicariously experience transcendence, misery, elation, despair, and the seemingly unfathomable range of human experience and emotion. The methods of science exclude this. If scientism will only allow such methods, it will cut the human race off from this. Culture itself will be cut off. This is, once again, science overstepping its boundaries and becoming scientism.

Kenneth Schaffner argues that scientism is incompatible with neuroethics. Neuroethics studies the ethics of neuroscience, and how neuroscience itself is relevant to ethics. Scientism is incompatible with neuroethics because it depends on qualitative states of subjects who have phenomenal experiences and are able to access those experiences in a way that requires a first-person consciousness.

James Smith gives reason to think that scientism frames the entire debate about religion and science wrongly. This serves as a nice compliment to Principe’s chapter. Smith argues that science is not sitting outside all contexts as a tribunal. It does not get to judge every other discipline while remaining itself unjudged, or even unjudgable. It is not that we have Nature on the one hand, discovered by science, and Religion on the other hand, which constitutes culture. Smith tells us that Science itself is a culture and so to pit Religion against Science is to pit one culture against another culture. Reframed in this way, one can see that rather than seeing the issue in terms of Nature vs. Culture, perhaps one could see how the different cultures reveal Nature in its own way. For example, science could tell us about the physics of nature; religion could tell us about the metaphysics, or even the origin, of Nature. Science might tell us about the evolution of Nature, whereas religion might interpret the meaning of such an evolution as having this or that intelligent guidance, or this or that purpose or telos.

The New Orthodoxy exposes the shortcomings of a scientistic naturalism of which they are legion. Addressed from several disciplinary perspectives and from a sampling of some of the most important interdisciplinary scholars in the world, all who are in the humanities and in the sciences will benefit from reading this fine collection. Graduate students will also find a useful, albeit technical, survey of the issues concerning scientism. The present text would be a useful advanced text in undergraduate and graduate philosophy, humanities on topics of philosophy of science and theology and science.