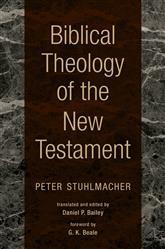 The magnum opus of Peter Stuhlmacher, professor emeritus of New Testament studies at the University of Tübingen, has at long last been made available to the English-speaking world through the translation efforts of Daniel Bailey in collaboration with Jostein Ådna. A two-volume work initially published in German and passing through multiple editions (Biblische Theologie des Neuen Testaments), Biblical Theology of the New Testament [BTNT]—now appearing in one volume—introduces the English-speaking world to the state of biblical and New Testament theology in German scholarship. The introductory bibliography and survey of New Testament theologies in Chapter 1 go a long way to this effect.

BTNT is divided in two “books”: Book 1, spanning some 750 pages, examines the message of the New Testament in six parts according to the chronology of its “proclamation”; and Book 2, less than 100 pages, examines questions regarding the formation of the biblical canon and how a text should be interpreted in light of its inclusion within the canon (“canonical exegesis”). In honor of Stuhlmacher’s seminal essay on the subject, Daniel Bailey concludes the book with a lengthy appendix on why hilastērion in Romans 3:25 should be translated as “mercy seat” or “place of atonement” instead of “atoning sacrifice” or “propitiation.”

According to Stuhlmacher, the best approach to biblical theology considers the tradition-historical character of its message, and therefore Book 1 unfolds according to the chronological proclamation of the New Testament message. Parts 1 and 2 thus do not focus on the message of the Evangelists per se but on the kerygma of the historical Jesus, the oral tradition, and the earliest confessions of the church. Following the lead of Birger Gerhardsson, Rainer Riesner, and others, Stuhlmacher finds in the Gospels historically reliable eyewitness testimony such that “[t]he earthly Jesus was none other than the Christ of faith” (180, italics original). He considers the kerygma in Acts 10:36–43 to have pre-Easter origins and contains one of the earliest summaries of the Christian confession

In Part 3, Stuhlmacher examines the “proclamation” of Paul. The origin for Paul’s gospel was his experience on the Damascus road, which gave rise to an emphasis on Jesus’ atonement for sinners and the justification of the ungodly. Stuhlmacher contends that for Paul justification, which is understood to be both forensic and transformative, was not a subsidiary or polemical doctrine but was the center of his theology.

In Part 4, Stuhlmacher examines “the proclamation in the period after Paul.” Stuhlmacher considers five of the Pauline letters to be pseudonymous (Ephesians, Colossians, and the Pastorals), although he claims the ecclesiology and eschatology in these later letters are remarkably similar to what appears in the genuine Pauline letters. The other texts included here are Hebrews, James, 1 Peter, 2 Peter, and Jude. Stuhlmacher claims James “massively contradicts the Pauline doctrine of justification” (506) and thus cannot be placed “on equal footing in the canon next to the Pauline doctrinal letters” (504). Stuhlmacher portrays early Christianity as comprised of various schools (e.g., Pauline, “Jewish Christianity,” Johannine, etc.), and 1 Peter appears as the theological “golden mean” between them (519). Building on Jude, 2 Peter reflects a later period of the church (end of the first / beginning of the second century AD), in which it was necessary to combat heresy by a right reading of Scripture.

Because Part 1 already examined Jesus’ proclamation of the kingdom of God, Part 5’s examination of the Synoptic Gospels is relatively brief, focusing on their distinctive contributions to themes such as Christology, ecclesiology, and ethics. The Johannine corpus is examined in Part 6, a corpus Stuhlmacher ascribes to the school associated with the so-called John the Elder. Even though Johannine theology is “pathbreaking,” “esoteric,” and “elitist” (703), it shares a common theological foundation with the rest of the New Testament.

Because of the length of the book and the limited space in this review, only a few theological strengths of the book can be mentioned. Time and again Stuhlmacher raises good questions from the text and offers keen insights into its meaning. His emphasis on the justification of the ungodly as the soteriological center of the New Testament is salutary, especially in light of attempts to view justification as a subsidiary or polemical doctrine. The attempt to locate the center of Scripture in God’s reconciliation of humanity to himself through the atoning work of Christ fits the biblical data (1 Corinthians 15:3).

One of the strengths of BTNT, which is also its distinctive contribution to New Testament theology, is its tradition-historical approach combined with a focus on canonical exegesis. While there is not one “right way” to write a biblical theology, a focus on the historical process by which the early Christian message took shape allows the individual voices to be heard and brings into clearer focus the contours of that message. To the extent that theology is grounded in history, a focus on history aptly prepares the way for theology. The corresponding weakness of the tradition-historical approach for biblical theology is that an overemphasis on tradition history in an attempt to “get behind the text” can actually underemphasize the text itself and can lead to unwarranted and speculative historical judgments (e.g, regarding the substitutionary view of Jesus’ death for sin, Stuhlmacher idiosyncratically claims, “No one had dared to think this before Paul” [333]). Except for the occasional lapse (see 216–18, 680–82), BTNT admirably utilizes tradition history to elucidate the biblical text.

From a methodological standpoint, Stuhlmacher’s approach to Scripture raises the question as to how one’s doctrine of Scripture impacts the task of biblical theology. Stuhlmacher holds to the inspiration of Scripture, but not its verbal inspiration (797). He thus questions the accuracy of historical details (e.g., Luke’s numbers in Acts [228]) and claims to authorship (e.g., 2 Peter is a “classic pseudepigraphon” [544]). He disputes various theological claims: Paul disagreed with the apostolic decree of Acts 15 (421); the author of 1 Timothy made “obviously mistaken developments” regarding women in ministry (472); James misunderstands and contradicts Paul’s teaching on justification (504); the impossibility of repentance for the lapsed in the exhortations of Hebrews should be rejected because it contradicts other biblical teaching (540); John’s Gospel presents “an actual opposing view of the Synoptics,” such that the testimonies in John “are selected, composed, and infused with theology in such a way that new facts and realities are thereby postulated” (692; cf. 735–36). Despite his aversions to the contrary (784–85), Stuhlmacher’s rejection of Scripture’s verbal inspiration leads him to a “canon within a canon” hermeneutic. For if the voices of Scripture are in direct opposition to one another—if they are mutually contradictory—then the interpreter is forced to choose one instead of the other or to privilege one more than the other. This inevitably leads to a “canon within a canon” hermeneutic in which some voices matter more than others—in Stuhlmacher’s case, Paul’s doctrinal letters appear the weightiest in the New Testament (786–88).

The rejection of verbal inspiration thus appears to undermine the task of biblical theology, which by nature aims for theological unity. Stuhlmacher repeatedly emphasizes the reality and unity of the canon, but is not unity undermined by the presence and necessary suppression of opposing voices within the canon? To be sure, biblical theology needs to consider all the voices of Scripture in order to grasp the whole, but this is a far cry from privileging some voices over others (e.g., Paul over James). The verbal inspiration of Scripture, which coheres with the claims of the biblical authors themselves (2 Timothy 3:16; 2 Peter 1:21), better upholds the task of biblical theology, for in removing the possibility of truly contradictory theological statements, it undergirds the unity and internal consistency of Scripture while at the same time allowing each biblical voice to be heard and appreciated. As a result, verbal inspiration removes from the interpreter the burden of creating a necessarily arbitrary “canon within a canon.”

Despite this weakness, BTNT is an excellent biblical theology of the New Testament. Within the discipline of biblical theology, BTNT will especially make the reader aware of the state of German biblical-theological scholarship, and the volume’s tradition-historical approach combined with canonical exegesis affords it a distinct place in the discipline. The English-speaking world can be grateful to Daniel Bailey that this magnum opus is now available in eminently readable English.