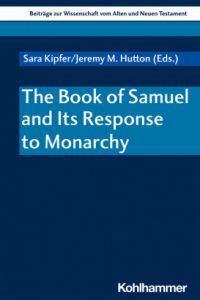 The Book of Samuel and Its Response to Monarchy is a collection of essays presented at Samuel Seminar in 2019 in Aberdeen, which coincided with Dr. Walter Dietrich’s 75th birthday. The book’s essays focus on the power of the in two ways. (1) The Book of Samuel as a Text Collection about Different Stages of the Institutionalization of Power. (2) The Book of Samuel as a Medium of Power Communication and a Contribution to the Political Discourse through the Centuries. The book divides into three main sections. Sara Kipfer and Jeremy M. Hutton introduce the reader to key topics (11–22). The main body of the book contains the essays from twelve contributors. The book concludes with a review of the material and critique by Dietrich.

David Firth, in the first essay, argues that Hannah’s prayer (1 Sam 2:1–10) is crucial for a final for reading of the text. Hannah’s prayer establishes key themes and points of references which are taken up and developed later in the book (23). The book primarily focuses on the reversal of fortunes motif and critiques those who do not align with Yahweh. Her song functions as a hope within the narrative since there is no king in Israel at this point, but also it critiques the traditional views of kingship. The next essay Regine Hunziker-Rodewald raises the issue of identifying pattern relationships among the semantic-syntactic data in 1 Samuel 5–6 in relation to the images offered by Philistia to the ark (39). He argues that the data shows the images belong to the setting of an ordeal performed to decide the ark’s guilt or innocence in what happened in 1 Samuel 6:9. In addition, he argues that the parallel in 1 Samuel 5–6 shows the foreigners winner’s perspective and the native loser’s perspective is unique in ancient Near Eastern texts.

In the third essay, Ian D. Wilson examines the book of Samuel as a source for the cultural history of ancient Judah (63). He focuses on how the book of Samuel presents the monarchy and how 2nd temple readers would interpret it. Next, Hulisani Ramantswana utilizes two cultural sayings from the Vhavenda people to interrogate the biblical text (81). Thus, this study engages in a culturally enthused hermeneutic of suspicion. The fifth essay Jeremy M. Hutton argues that an earlier pre-Deuteronomistic narrative underlies Wellhausen’s so called antimonarchic story (115).

The sixth essay, Hannes Bezzel questions the common interpretation of 2 Samuel 2–4 in terms of centralized monarchic states (165). He questions that these texts are anachronistic particularly from the point of view of recent approaches clan- and patronage-client relations. He argues that 2 Sam 2:1–2aa.3aLXX.4a as the oldest version of David’s coronation. The next essay, Sara Kipfer reevaluates the parallels between 1 Samuel 14:47–48, 52 and 2 Samuel 8:11–12, 15 (183). She revaluates these complicated literary problems by considering the ancient Near Eastern context. The eighth essay, Mahri Leonard-Fleckman argues that the exchange between David and Gath in 2 Samuel 15:19–22 could date as late as the post-exilic period.

The ninth essay, Benjamin J. M. Johnson argues that the final shape of the book of Samuel is not purely critical or defensive of David (225). The following essay, Thomas Naumann focuses on the question of establishing or realign royal power (243). His essay focuses primarily upon the weeping of the king as a means to establish power and he reviews previous suggestions concerning the weeping of the king. The next essay, Ilse Mullner examines the Davidic family with its conflicts, its power plays, and its struggles (281). The ambivalence of the main characters and the monarchy are best understood by focusing on the dynastic aspects of the monarchy. The twelfth essay, Johannes Klein argues that on a synchronic level 1 Samuel–1 Kings 12 gives an anti-dynastic tendency (299). However, the author of the Saul-David narratives have taken their material and shaped it so that it is positive.

The book presents some of the world’s leading scholars on the book of Samuel in a singular monograph. The book illuminates various topics in the book of Samuel from diachronic readings to cultural readings. The book’s focus upon the power of the monarchy highlights a key issue within the book of Samuel and the editors have chosen an appropriate theme. The book serves as a great reference for scholars researching the book of Samuel. The most significant essay was David Firth’s, “Hannah’s Prayer as a Hope for and Critique of Monarchy.” His essay brings to light the hermeneutical underpinnings of the book as a whole and shows that there is a macro-structure. Firth shows how Hannah’s song connects to the larger narrative. However, he does fail to connect 1 Samuel 2:10 and 2:35, which describes Yahweh’s anointed (king-priest) rising up after the fall of the Elide dynasty.

A downfall of the present volume is the lack of discussion of the king’s relationship to the priesthood. The priesthood is a major institution in the monarchy and the king’s relationship to it can be seen in the book of Samuel. For example, a key power struggle that 1 Samuel 2:35 anticipates is the removal of the Elide dynasty and the rise of a faithful priest, which this author believes is a king-priest (1 Sam 2:10, 35). Although various authors within this book consider ancient Near Eastern materials, they do consider that the surrounding kings of the nations were king-priests. Thus, the king’s role being similar to the kings of the nations (Deut 17:14; 1 Sam 8:5). As a result, the book focuses only on the power of the king within certain institutions and does not fully explore the role of the king’s role with the priesthood. Despite this oversight, this book is an engaging read and worth digging into for further study into the book of Samuel. The book is an ideal read for a Ph.D. student or professor engaging on the topic of Samuel. 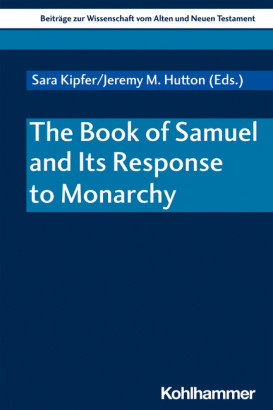