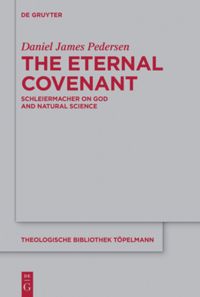 The focus of this work is the “eternal covenant” between the Christian faith and natural science that is commended in the work of Friedrich Schleiermacher. As the introduction rehearses, two interpretations of this proposal have dominated the literature: a “separationist model”, in which there is a rigid demarcation of the disciplines, and an “accommodation model”, in which the Christian faith always has to accommodate advances in natural science. But Pedersen considers both models flawed: not only do they fail to account for the terms “eternal” and “covenant”; they also fail to consider that the “eternal covenant” is not so much a methodological proposal as a carefully argued conclusion, undergirded by “a host of claims and commitments supported by argumentation” (p. 12). To demonstrate this latter position is the principal task which this book sets itself, and its proving ground is Schleiermacher’s major work in Christian dogmatics, Christian Faith.

The case begins in the second chapter, which illuminates the scientific commitments explicitly on display in Christian Faith, with particular reference to Schleiermacher’s views concerning the duration, extent, and evolution of the cosmos, and of the evolution of life. In each case, Pedersen underlines the ways in which his arguments parallel the most innovative scientific and philosophical theories of his day, as advanced by figures such as William Herschel, Pierre-Simon Laplace, and Erasmus Darwin. At the same time, Pedersen also demonstrates that the cosmological debates of the time “made heavy use of non-empirical beliefs, many of which were explicitly theological in nature” (p. 31). Natural science and Christian theology were thus organically related and mutually accountable at the time, and no clear demarcation or hierarchy between the disciplines was available or intelligible.

The central chapters of this book all serve to evidence two points: first, that at various points in Christian Faith Schleiermacher deploys metaphysical principles in support of his theological argumentation; and second, that these principles were common both to the philosophers and to the natural scientists who were writing around the same time. The third chapter unfolds the shared commitment of Schleiermacher and Leibniz to the perfection of nature, in so far as the divine power as informed by the divine wisdom necessarily creates a world that does not require further divine intervention, as the divinely created means perfectly serve the divinely purposed ends. Both figures thus reject absolute miracles; as Pedersen writes, “the less God discretely acts in history, the greater the corresponding perfection of God’s creation” (p. 49). Instead, both figures affirm the continuity and integrity of the natural order as distinct from (yet dependent upon) God, an affirmation grounded in a particular construal of God as perfectly wise and good. Schleiermacher’s construal of the natural order is further explored in the fourth chapter. Again, his account of the nature system, far from being a methodological assumption, is the conclusion of careful argumentation that shares numerous features with the works of Leibniz and Spinoza.

The fifth chapter recounts Schleiermacher’s rejection of Leibniz’s account of hypothetical necessity in favour of Spinoza’s view that the world is as it is of absolute necessity. This move further bolsters his case for the rejection of miracles, but more crucially posits that divine freedom and divine necessity are not mutually contradictory. The sixth chapter finally shows how Schleiermacher insists with Leibniz and against Spinoza in the validity of final causes. Unifying Leibnizian teleology with Spinozan necessity allows Schleiermacher to posit that the world has the love of God as the world’s necessary end and the wisdom of God as the world’s necessary order. This renders the world as—in Pedersen’s words—“the artwork of God, the perfect work of the perfect artist, and so the absolute revelation of God” (p. 129). And this in turn means that to investigate the world, as natural science does, is to investigate the means and order of God, and thus to investigate the essence of God itself.

The result, as Pedersen recounts in his conclusion, is that “Theology and natural science need each other to offer the complete account that the unity of the world demands” (p. 154). They remain distinct disciplines, with their own proximate aims, procedural methods, and normative standards, but they are distinct only in relative and not absolute terms. Either one, indeed any discipline, in isolation is “necessarily incomplete” (p. 179).

Pedersen’s work succeeds on multiple levels. Stylistically, despite its traversing of some deeply complex subject matter, the writing is precise and lucid. The structure is rather unintuitive, and requires patience, but is seen at the end to have been heuristically helpful. Materially, the work succeeds in its stated desire to demonstrate that Schleiermacher’s recommendation of an eternal covenant is not a methodological proposal but an argued conclusion, grounded in the view that the world is a self-revelation of the divine being.

There are points at which the reader might wish for more, or plausibly demur. In respect of the former, though Pedersen sketches out plausible ways in which Schleiermacher’s position might defend itself from critiques drawing on the absurdity of human sin (pp. 142–150) or the indeterminacy of quantum physics (pp. 178–179), there would be room for lengthier reflections. In respect of the latter, the absolute resistance to theological paradox evident throughout might encounter some resistance, particularly in more dialectically inclined circles, while the account of the incarnation as “explicable by the system of nature” (p. 90) might cause some interpreters of Schleiermacher to hesitate and ultimately dissent.

In terms of the ongoing conversation between religion and science, Pedersen indicates the perhaps unexpected way in which the work of Schleiermacher poses a number of tantalising challenges even today. Schleiermacher posits the idea that the divine freedom and the divine necessity, far from being antithetical, are in truth identical. He offers a view of divine action upon the world that relies upon a very traditional account of the divine being yet resists divine intervention and divine miracles. And he articulates the contention that the scientific investigation of the ‘how’ of the world cannot be divorced from the theological investigation of the ‘that’ and ‘why’ of the world, on the grounds that both are in truth investigating aspects of one and the same divine essence. As this very fine book insightfully suggests, there is much here for both scientists and theologians to continue to ponder.