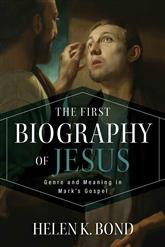 Helen Bond is the head of the divinity school at the University of Edinburgh and has served as professor of New Testament since 2000. She has published extensively on topics related to Jesus, the Gospels, and their first-century environment, and her work in these areas is evident in this thought-provoking and well-researched volume. Bond operates on the assumption that establishing a text’s genre is key to interpretation, and since Mark is the earliest Gospel written, this is especially important in understanding Jesus and the particular ways in which the evangelists portrayed him.

Along with much of recent scholarship, Bond argues that Mark’s work belongs to the category of ancient bioi, exhibiting many of the literary conventions of this genre. From the introduction she labors to show that genre is far more than a stylistic device, but profoundly influences how the author depicts his subject as well as how the author understands the world. Seeing Mark as a biographer, she contends, is essential for understanding what he wanted to communicate about Jesus, and how he shaped, reappropriated and reconfigured his material for his audience as they sought to articulate a sense of Christian identity within the Roman world. Each chapter further develops the ways Mark does this, noting where he conforms (and occasionally does not conform) to other examples of ancient bios such as Xenophon’s Memorabilia or Lucian’s Demonax.

In chapter one Bond sets the stage for understanding Mark’s Gospel as ancient biography, noting how he uniquely expanded and reformed the Roman idea of “Gospel” to include the life, ministry and teaching of Jesus. She argues convincingly that Matthew and Luke view Mark as a bios in light of their additions, including elements like genealogies and birth accounts in line with conventions displayed in other bioi. Much of the chapter is taken up with a survey of scholarly views and developments related to genre in the Gospels, how this influences composition and purpose, and the ways others have understood Mark in light of literature from the same era.

Chapter two surveys the features of bioi, how the genre developed and how biographers viewed aspects of their subjects, such as character development, virtues, and teaching. In terms of how Mark describes Jesus, she contends that his work “has most in common with the Greek lives of philosophers, especially those…that hold up their subject as a model to be imitated” (76). Here and throughout, Bond notes that bioi are distinct from history writing, and thus there is a tension between the historical figure of the subject and the literary act of making them a paradigm for others. One of her focuses is that Mark highlighted certain aspects of Jesus as part of the exempla tradition, meaning that he intended for his audience to compare themselves with and identify with Jesus.

In chapter three Bond examines Mark as a biographer and what can be said of him based on his writing. Namely, she points to Mark’s rhetorical skill and creativity in his use of ancient literary devices like chreiai (terse narratives without extraneous detail). She notes also how Mark’s portrait of Jesus is consistent with values prized in Greco-Roman culture (like speaking with authority, silencing opponents and dying for his cause), but also subverts that same culture (as with Jesus calling for followers to deny themselves). Chapter four examines the different sections of the Gospel and how Mark draws attention to particular qualities in Jesus, focusing on the issue of his identity and characterization.

Chapter five focuses on supporting characters, and Bond suggests that Mark is not ultimately concerned with these for their own sake but uses them to make a point about Jesus as the subject. For example, she argues that Mark intends for the disciples’ desertion of Jesus not to highlight their failure but to illustrate the horror of Jesus’ lonely death. In other cases, Bond writes that characters such as Bartimaeus or the anointing woman serve as exemplum to the audience. In chapter six, Bond casts Mark’s account of Jesus death in light of biographical convention, claiming that Jesus’ death is in line with accounts of philosophers who die in accordance with their teaching. That is, she sees Mark following convention by shaping the narrative of Jesus’ life to show that his shameful death was fitting. However, she notes that even in his similarity to other biographers, Mark is unique and “turn(s) conventional ideas of a death that is good and even noble upside down” (230). In the final pages, she notes how Mark’s work, seen through the lens of bioi, served to immortalize the memory of Jesus for his readers as a literary monument to his life and teaching.

Bond’s work has much to commend it. Her consultation of ancient and modern sources is meticulous, her prose flowing and the structure of her chapters easy to follow. Her work is unique as a full-length apologetic for Mark’s classification as a bios, and that this classification has myriad implications for interpreting his work. Part of the book’s contribution is as an answer to form-critical assumptions surrounding Mark, namely the idea that he was just a compiler of tradition. She makes a strong case for clearly seeing Mark as an individual standing behind the text, and that this truth was important for his original readers and should be today.

In her evaluation of different perspectives than her own, Bond is respectful and fair. This is refreshing, since not all readers may share her conclusions. For example, some may be disappointed by her skepticism about the historicity of some elements in Mark’s Gospel. Because she argues that Mark’s characters have a literary purpose, she expresses agnosticism at whether these are more than his literary creations. That is, since Mark followed ancient bioi, she proposes that historical accuracy was not necessarily important to him, and he thus employed various fictions, distortions and idealizations in shaping his narrative. She is clearest about this in her discussion of secondary characters like the disciples, writing that “just because the disciples have counterparts in the real world does not mean that they are any less Markan creations” (199). In this way, she departs from scholars like Craig Keener who presume Mark to be generally historically reliable. She does not say that there is no history in Mark, or that his anecdotes do not communicate truths about Jesus, but readers may be left wondering exactly how historical she understands Mark to be.

Regardless of one’s answer to the historicity question, the book will undoubtedly serve as a starting point and reference from which student and scholar alike will examine Mark’s work and its background, and it deserves to be widely read. While useful to the serious scholar, the original languages are transliterated and esoteric concepts explained in a way that make it accessible to laypeople as well. Her work provides fresh insights into the author of the earliest Gospel and how his environment influenced his work and would be a helpful addition to library of anyone seeking to interpret Mark more carefully.