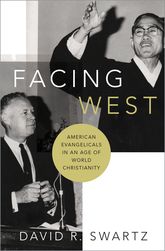 David R. Swartz, Associate Professor of History at Asbury University, has written a pathbreaking study of the complex interactions between American and non-Western evangelicals since World War II. Facing West deserves a broad readership and will become a standard text for students and specialists studying the changing demographics of evangelical Christianity and how they have reshaped evangelical culture, theology, and politics.

Equipped with extensive archival research and interviews, Facing West portrays one major theater in the seismic demographic changes in Christianity in the last century. In 1900, about eighty percent of all Christians lived in North America and Europe. In 2000, the clear majority of all Christians lived outside of North America and Europe. A change so large has affected all major Christian traditions, including and especially evangelicalism. Because of their commitment to missions and decentralized structure, successive generations of evangelicals spread the gospel and planted churches in Latin America, Africa, and Asia. Most of the new churches indigenized their leadership and, by the 1960s, began to significantly recontextualize Western evangelicalism for their own communities. The “global reflex” between the older, whiter, more affluent Western evangelicals and the newer, often poorer Global South evangelicals created both tensions and opportunities, which Swartz explores in detail (p. 6). Through nine chapters, each anchored in a year and city around the globe, Swartz narrates how evangelicals navigated the distribution of power within their sprawling community, the evolving theological emphases, and ultimately the way non-Western evangelicals levelled serious critiques against Western evangelicalism beginning in the 1970s.

These critiques, as Swartz shows, often centered on the Western evangelical tendency to prioritize evangelization (sharing the gospel and winning converts) over social justice (reforming society and improving material conditions). For the leaders of American evangelicalism, including Billy Graham, social transformation happened through individual conversions, and prioritizing social justice in the work of missions was regarded as a deviation from evangelicalism. The social gospel was what evangelicalism’s primary American rivals, liberal Protestants, did. Outside the context of American Christianity, however, this division between evangelization and social justice made little sense. For Christians in Peru, or Ghana, or India the plight of the poor and dispossessed was seen as inseparable from the need for individual conversion. Theologians such as Samuel Escobar and René Padilla diagnosed systemic or social sin as well as personal sin. Moreover, they claimed that Western nations, including the United States, had implemented sinful systems of racism, imperialism, colonialism, and exploitative capitalism. The legacy of Western Christian missions was thus mixed for Global South Christians—bringing the good news but also foreign domination and cultural influence.

Swartz traces the emergence of this Global South critique through the figures and events that brought evangelicals around the globe together. The major sites of interaction between American and non-American evangelicals were international conferences and within the structures of evangelical institutions including World Vision, the National Association of Evangelicals, and the Lausanne Committee for World Evangelization. No single event was more consequential in Swartz’s telling than the Lausanne Conference on Global Evangelization, held in Switzerland in 1974. This gathering—“the most important evangelical gathering of the postwar era”—consisted of more than 3,000 evangelicals from more than 150 countries (p. 87). The conference witnessed “the chastening of America…from many quarters of the Majority World,” exposing divergent understandings of evangelization and social justice developing across the globe (p. 87). It also revealed trends that would only accelerate in coming decades: the growing influence of Pentecostal and charismatic theology on Global South evangelicals and, at the same time, the continued consensus among all evangelicals around relatively conservative social attitudes on sexuality. Swartz expertly captures the interplay between these various issues, and the unexpected ways evangelicals in different settings grappled with them.

Swartz’s later chapters bring the story of the “global reflex” up to the present by profiling fascinating examples of American evangelicals adapting to foreign contexts. He examines the changing work of International Justice Mission (IJM), a non-governmental organization (NGO) founded in the 1990s to combat human trafficking. For evangelicals, this often meant a focus on sex slavery in countries such as Thailand. In its early years IJM aggressively pursued high profile sex slave breakups, becoming known in Chiang Mai, the capital of Thailand, as “Cops for Christ” and using “Rambo” tactics (p. 240). In the wake of the terrorist attacks on September 11, 2001, IJM aligned with (and received aid from) the US government’s new focus on human trafficking. While this approach did produce some high-profile results, ultimately it proved less effective at solving the intractable systems that enabled human trafficking. Over the course of the 2000s and 2010s, IJM radically changed its tactics while keeping the same goals. “The twenty-first century social justice movement,” Swartz writes of IJM, World Vision, and the Lausanne Movement, “took a more flexible and diverse shape” (p. 241). In Chiang Mai, IJM began to prioritize understanding cultural context, partnering with existing local organizations, and addressing systemic problems alongside individual bad actors.

Swartz ends Facing West by examining American evangelical responses to the changing demography of the United States. While Boston, and New England more generally, is one of the U.S.’s most secular regions, the growth of immigrant and non-white evangelical churches is a notable exception. The year 2045 is when demographers forecast the US will become a majority- minority nation, and the same change is already well under way in American evangelicalism. Immigrant evangelical churches founded by Korean- and Spanish-speaking congregations, among many other languages, have brought with them the same changes in priorities that Global South evangelicals brought to the Lausanne Conference in 1974. Concerned about poverty, immigrant rights, and social justice, while also socially conservative, these evangelicals “simply do not fit the archetypal conservative–progressive binary as it stands in the United States” (p. 6). They are redefining what it means to be an evangelical, even as a significant white evangelical reaction has become entrenched in the ongoing “Christian Americanism” that defined early postwar evangelicals. Today, Christian Americanists resist or seek to reverse both theological and cultural changes in evangelicalism. Ultimately, in Swartz’s assessment, the contemporary moment is defined by these divergent attitudes toward the global reflex. That there is a powerful reflex, however, is not up for debate.

The most hopeful signs of change for Swartz is the growth of a “burgeoning evangelical multiculturalism” in some segments of the West (p. 283). This new evangelical milieu is theologically rigorous, socially engaged, and also a prophetic witness. In the United States, multiculturalism holds out the possibility that American evangelicals will “contextualize themselves” and rethink “the triumphalist paradigm within which they operate” (p. 299). Global evangelicals help drive home the point that, at their best, American evangelicals have also acknowledged: “modern American categories cannot contain an ancient and global faith” (p. 297).

Facing West is a crucial new entry into a growing scholarly conversation about the ways American evangelicalism has existed in international and global contexts. Swartz’s work should be compared alongside Melani McAlister’s The Kingdom of God Has No Borders: A Global History of American Evangelicals (Oxford University Press, 2018) and Lauren Turek’s To Bring the Good News to All Nations: Evangelical Influence on Human Rights and U.S. Foreign Relations (Cornell University Press, 2020). For students of biblical and theological studies, these works together highlight how historical contexts are critical to understanding the reading of the Bible and the production of theology. Without an appreciation of the changing shape of evangelicalism, it is difficult to accurately assess how and why evangelicals from different parts of the globe came to prioritize different aspects of their faith. Swartz’s work significantly advances our understanding of these issues.