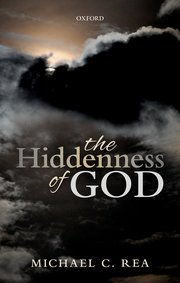 Michael C. Rea is Rev. John A. O’Brien Professor of Philosophy and Director of the Center for Philosophy of Religion. In this book, Rea deals with two problems induced by divine hiddenness. They are [1] the argument against the existence of God, most notably by J. L. Schellenberg; and [2] the challenge of the idea of God’s love. Rea’s approach to the issues involves two steps to respond to these two problems respectively. The first step involves two arguments to show that the hiddenness problems are based on an unfounded assumption about divine love. The first argument, in Chapter 2, is that Schellenberg’s problem is based on a concept of God which is different from and fails to target specifically Christian belief in God. For Rea, the problem of divine hiddenness is fundamentally “a problem of violated expectations” (p. 25).

In Chapter 3, Rea argues that the concept of God in biblical portrayals emphasizes two key attributes, personality and transcendence, which are woven together while they are also in tension with each other. In short, we cannot understand divine love without the light of divine transcendence, and vice versa. However, most contemporary religious persons and philosophical literature tend significantly to downplay the aspect of divine transcendence in favor of the aspect of God’s personality, and consequently the idea of divine love is derived from ideal parental imagery, which is acquired from an empirically philosophical reflection on the best model of human love (pp. 35-37). For Rea, we cannot have a fully transparent understanding of divine love simply by reflecting on human paradigms of love (p. 54); all these philosophical portrayals of attributes of God are, at best, analogical (p. 51). It also means that even if our expectation of God’s divine love is violated, it does not necessarily follow that God is not good; it may be because God’s divine goodness is significantly different from creaturely goodness; and thus Schellenberg’s problem is unsuccessful as an argument against the existence of God (p. 57).

In Chapter 5, Rea argues that even if we set aside the source of divine revelation, there is still reason why we should not identify divine love by reference to idealized human love. Generally, philosophers conceived ideal human love as involving two desires: unlimited desire for the good of the beloved, and unlimited desire for union with the beloved (pp. 65-69). However, these desires may conflict with each other. Furthermore, the idea that God is unlimitedly devoted to human good is inconsistent with the view that God is perfectly personal rather than mechanical; indeed, God has a unique personality in promoting non-anthropocentric good. It would be bad for God to give up all his own pursuit to serve unlimited human goods. It is also doubtful that God would desire union with the beloved in an unlimited way because human beings may not be a fitting object for such unlimited union with God (pp. 76-77).

Although hiddenness cannot refute the existence of God, it may support the negative valenced analogies of God as a distant and neglectful lover. This is Rea’s second step of responding to divine hiddenness. In Chapters 6 and 7, Rea argues that the availability of divine encounter experience is indeed much greater than the commonly credited literature. The encounters, Rea finds, are not ecstatic mystical ones, but “more common, phenomenologically low-grade sorts of encounters” (p. 91). Rea calls them “garden-variety divine encounters” (p. 115). By referring to T. M. Luhrmann’s interpretation, such religious experience is the result of the exercise of a learnable skill, one that lets the subjects experience natural phenomena as the presence of God (p. 94). The hiddenness problem is usually based on the assumptions that the only real, important religious experiences are sensational, or that experiencing God requires “special causal contact with God” (p. 97). However, Rea argues that many believers’ reports of religious experiences are non-sensational, and can be experienced in our ordinary worshipping life. It is also not mediated; as he states, “a religious experience is an apparent direct awareness of either (a) the existence . . . of a divine mind; or (b) the fact that . . . a testimonial report communicated by others has been divinely inspired” (p. 130).

Based on the uniformity assumption which states that the way God communicates with humans in biblical times is the same way he communicates in contemporary times, Rea assumes that the religious experience of Moses on Mount Sinai in Exodus 19-20 was just like a contemporary experience of the same sort. On Mount Sinai, Moses heard the voice of God while people of Israel heard thunder. For Rea, the difference between Moses’ experience and the more general mundane kind of religious experience does not lie in their level of stimulus, but their level of cognitive processing (p. 110). They had the same stimulus; the difference was just because of their cognitive difference resulting from training. Rea rather calls Moses’ religious experience “cognitively impacted experiences involving natural stimuli” (p. 108).

In Chapter 8, Rea is concerned about people whose relationships are intensely conflicted with God. Rea makes three arguments through reflection on the book of Job and Lamentations that are “two scriptural portrayals of intensely conflicted divine–human relationships” (p. 138): first, the theophany at the end of Job shows that God takes Job’s grievance seriously. Second, God’s validation of lament and protest are part of a broader pattern of God’s relationship with Israel. Third, participating in a relationship with God as shown in the Bible is also accessible to anyone who has a concept of God and is willing to try to participate in such relationship.  Based on Jesus’s Sermon on the Mount, Rea in Chapter 9 argues that even for those who have experienced religious trauma or have no concept of God, the sufficient condition of participating in a relationship with God is just by trying (p. 163). Trying to seek God is easy; it can be achieved so long as one is able to participate in a personal relationship, is receptive (not indifferent) to finding God, and has “a desire to find something that one conceptualizes by way of a concept of God” (p. 169). In our seeking God, we are already participating in a reciprocal relationship with God, even if we are not consciously aware of God, and thus we cannot refute the idea of divine love simply by virtue of not providing a conscious reciprocal relationship (p. 175). Finally, Rea concludes that there is no reason to believe that divine love is more appropriately characterized in a negative valenced analogy than a positive one. In the face of the phenomenon of divine hiddenness, Christians do not need to move to either atheism or non-personal deism.

One important contribution of Rea’s book is that he not only responds to the philosophical challenge of the existence of God, but also to the existential problem of God as detached and neglectful. He deals with these two problems together by an interdisciplinary approach which attempts to integrate ideas both by philosophical literature, and by biblical and theological studies. While it may not convince those atheists and anti-Christian thinkers, it can provide a rational justification of Christian faith for believers in the face of struggles of divine hiddenness. However, Rea’s account may conflict with Catholic spirituality. For instance, Rea explained that St. Teresa’s experience of divine hiddenness may be due to her persistent engagements with the sufferings of others which have shaped her cognition and “make it hard to experience God’s love and presence” (p. 136). In Rea’s account, St. Teresa seems to be experiencing depression. However, in Catholic tradition, such experience is called a “Dark Night of the Soul” which is a spiritual transformative experience. When it ends, one’s life is transformed, and becomes more faithful and wondrous again.

However, the idea of a “Dark Night” seems to assume that God will occasionally and deliberately hide himself from human beings and stop communicating with Christians, even though it is for the sake of their spiritual transformation. Indeed, Rea does not deny the tradition of a “Dark Night of the Soul”. In a footnote, he cites the writing of St. John of the Cross and argues that such purification “involves God’s deliberate action to block one’s sense of God’s presence” (p. 96, n. 9). Rea assumes that “God is always and everywhere intending that people experience as much of God’s love and presence. . . . God is constantly communicating” (p. 135). For Rea, the experience of divine hiddenness is because of the condition of human cognition which might be influenced by sin, doubt, suffering or block deliberately by God. Rea seems to assume that God is always present and will never hide himself from human being. If so, a few questions come to mind. First, how does Rea explain Jesus’s experience of having been forsaken by the Father in the event of crucifixion? Second, was Jesus’s cognition also influenced by his suffering or blocked by the Father? And, third, was Jesus not aware of his own cognitive condition at that time? Rea’s theory seems to imply an answer of “yes” to the second and third questions. However, these imply that Jesus was under delusion and lacked self-understanding during his crucifixion. Neither answer seems acceptable by traditional Christians.