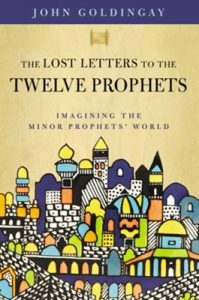 John Goldingay is Senior Professor of Old Testament, and David Allan Hubbard Professor Emeritus of Old Testament for Fuller Seminary. Goldingay received his Ph.D. from the University of Nottingham and his DD from the Archbishop of Canterbury at Lambeth. He has published numerous monographs on Old Testament Theology and its study, and most notably, was the author of the Daniel volume for the Word Biblical Commentary series.

The Lost Letters to the Twelve Prophets: Imagining the Minor Prophets’ World sets out to explore the Minor Prophets by imagining letters to which the prophets were replying. Drawing on a similar model used in Epistles to the Apostle by Colin Morris, Goldingay sets out to create plausible conversation partners for various sections within each prophet (ix). The introduction includes a brief summary of the Old Testament timeline, what Goldingay calls the “First Testament,” and then a short annotation for the historical Sitz im Leben for each of the twelve books (xiii-xviii).

Each of the twelve Minor Prophets receives its own chapter and is laid out in roughly the same order. First, Goldingay gives a brief overview of the timeframe and ministry of the prophet. These overviews range from several pages, e.g. Hosea (1-4), to a single paragraph, e.g. Nahum (135). Goldingay then presents his various letters with their attendant replies from the biblical text. The author prefaces the letters with a bolded heading and seeks to draw from historically accurate locations and at least plausible naming conventions for them (x). Occasionally Goldingay inserts real people into these created letters; for example, one of the letters written to Hosea comes from “Jonah ben Amittay in Gat-hepher” (37). In reply to these letters, Goldingay inserts the relevant passage from the Minor Prophet and then offers a brief “Background and Foreground” section wherein he exegetes the passage. All Bible passages are drawn from his own work, The First Testament: A New Translation, which notably preserves the divine name with vowels, i.e. Yahweh.

After working through all of the Minor Prophets, Goldingay closes with his own personal letter to the collective group (229-230). In it, he views the works of the prophets as hyperbole, but hyperbole with a purpose, foreshadowing the coming calamities and days of Yahweh. This focus on calamity and restoration, he says, calls the reader to prepare themselves for the final and culminating Day of Yahweh. A small index of passages used follows and closes the book.

Positively, Goldingay has created a charming and easy-to-read book for an oft-neglected part of Scripture. The letters are interesting and varied enough to feel authentic as products of multiple writers from multiple contexts. Goldingay’s occasional insertion of actual historical figures into these letters aids this authenticity and helps highlight the historical interrelation between the prophets. Goldingay’s letters also give helpful windows into the troubles and contexts for each of the Minor Prophets, which is not always easy to do in non-technical work. Readers will appreciate this simplified presentation of the Book of the Twelve.

Despite its novel approach to engagement with the Minor Prophets, Goldingay’s work suffers from several critical weaknesses, the first of which regards its approach. While creating artificial dialogue could be helpful in an epistolatory context, that does not guarantee it works for other genres. Most books, but perhaps especially those with a narrative presentation, like Jonah (106-116), are deprived of their narrative style and forced into an artificial arrangement of responses to a letter. One may rightly ask, what value does this bring? It is dubious if Goldingay’s approach is helping the reader dig into the text, for the text is no longer as it originally was, either in genre or context. Even for those books which are primarily dialogical, this approach does not work well. For example, in Habakkuk, which contains speech cycles between God and the prophet, the prophet’s questions are ignored and replaced by Goldingay’s letters. Thus, the reader is given mere hypothetical letters in lieu of Habakkuk’s questions from the biblical text.

A second limitation of the book is that it is, necessarily due to length, selective and not comprehensive in its treatment of the Minor Prophets. A reader will be treated to the highlights and key points of the books, but they will not come away with a full survey of any text. In fact, according to Goldingay’s index, only Obadiah is exhaustively covered (232). This selective approach also leads to another problem. By using artificially created questions, Goldingay frames the text for the reader in specific ways. This means that Goldingay has assumed the responsibility for making exegetically significant decisions for the reader without informing them that he has done so. For example, the opening letter to Jonah and Goldingay’s subsequent exegesis frames the Assyrians as problematic because they “are an imperial power” and Jonah himself “give(s) no indication of being against foreigners” (110). Both assertations, however, are not in the text itself but represent an interpretive choice that may or may not be correct. A casual reader will be blind to other possible options because the text has been framed for them. If the book’s goal is to make the Minor Prophets easier to understand (ix), this represents a perhaps unfortunate choice in presentation.

Overall, The Lost Letters to the Twelve Prophets: Imagining the Minor Prophets’ World is an intriguing work whose value is not always matched by its style. Goldingay is to be praised for such a creative work and for bringing much-needed widespread attention to the Minor Prophets. Students can approach this text for inspiration on how one can creatively approach presenting the biblical text, but should look elsewhere for more robust and thorough treatments of the Book of the Twelve. Goldingay, himself, has more thorough works on the topic such as Hosea to Micah published by Baker Academic. Students might also consider The Message of the Twelve by Al Fuhr and Gary Yates for another helpful survey of these texts. 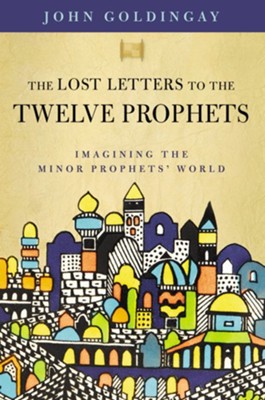