Butner, Jr., Glenn D. The Son who Learned Obedience: A Theological Case Against the Eternal Submission of the Son. Eugene, OR: Pickwick, 2018, pp. 224, $28, softcover. 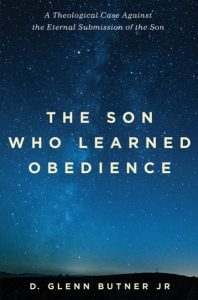 Glenn D. Butner is Assistant Professor of Theology and Christian Ministry at Sterling College, KS. Prior to The Son who Learned Obedience (subsequently, SLO), he authored articles on the Trinity including, “For and Against de Régnon: Trinitarianism East and West,” (International Journal of Systematic Theology 17.4) 2015, 399-412, and “Eternal Functional Subordination and the Problem of the Divine Will” (Journal for the Evangelical Theological Society 58.1) 2015, 131-49. His article, “Against Eternal Submission: Changing the Doctrine of the Trinity Endangers Salvation and Women,” (Priscilla Papers 31.3) 2017, 15-21, was published in the academic journal of Christians for Biblical Equality, an organization devoted to equipping people for egalitarian ministry. SLO only touches on socio-cultural issues briefly. It contends that eternal relational authority and submission (hereafter, ERAS), a perspective on Trinitarian relations, undermines the Trinity and salvation.

Butner begins by describing his method and key argument. He understands theology to be second-order, so he primarily addresses indirect doctrinal principles, ending with direct exegetical data (pp. 5-9). The question of ERAS is not one of exegetical facts but of the “best way to make sense of” and to provide “conceptual clarity” to Scripture (p. 9). This contrasts with ERAS proponents’ appeals to exegetical necessity (p. 162). As a concession, Butner denies that ERAS’s Person-only submission entails Arianism (pp. 21-25). However, since ERAS requires three wills, ERAS contradicts the pro-Nicene tradition by rending Gods’ external working into three (pp. 25-48).

SLO also makes an argument from Christology and substitutionary atonement. Traditionally, Christ’s two natures operate differently within his Person, neither conflating nor mixing (pp. 67-72, 76-85). ERAS’s Person-only submission conflates these operations (pp. 72-76, 85-94). Also, if the Son came in obedience to the Father, then the Son died for himself, not for the world (pp. 95-112). The Son had to have come freely if his atonement counted for others (pp. 113-121).

In response I will offer four positive affirmations and five critiques. First, SLO offers a significant concession in defending ERAS against claims of Arianism. Other opponents of ERAS have not recognized ERAS’s procession/submission analogy: as the Son can be eternally generated—his Person, not the Essence—so the Son can be eternally submissive (pp. 21-25). SLO’s strengthening ERAS on a fundamental point highlights its fair-minded presentation.

Along the same lines, Butner throughout charitably acknowledges possible ERAS responses. He even suggests that ERAS, understood as distinct modes in God, “is admittedly able to evade some objections raised throughout the course of this book” (pp. 44-45). This admission again strengthens ERAS, allowing Butner to respond compellingly.

SLO also affirms the connection between Trinitarian processions and mission. It argues that their mission simply is their processions but with “a created term” (pp. 54-55). This counters theologians who might argue that ERAS wrongly identifies a necessary basis for the Person’s economy in the processions.

Lastly, Butner examines the issue from a thought-provoking discussion of Christ’s person and work. Chapter two provides an informative and high-level analysis of Maximus the Confessor’s view of natures and wills, relating Maximus to the ecumenical councils. This chapter joins with chapter three on Anselm and atonement to provide a helpful plunge into the historical debates regarding Christ’s two wills and the Trinity’s saving work.

Here are five critiques: First, SLO’s method seems problematic in reducing systematic theology to second-order clarifying judgments which “move beyond what the historical authors would have intended” (p. 8). Compare this to Aquinas’ pre-Modern method: “We ought not to say about God anything which is not found in Holy Scripture either explicitly or implicitly” (ST 1 Q.36 Art.3 ad.1; compare Westminster Confession 1.6). SLO’s method seems to mix second-order questions of language (e.g., whether words like “Trinity” adequately communicate implicit biblical concepts) with first-order questions of logic (e.g. whether “sending another on mission,” according to Scripture, logically implies an authority-concept [as ERAS holds] or whether authority implies divisive willing [as SLO holds]).

Second, certain conclusions do not follow. Compare Butner’s claim that ERAS mixes Christ’s natures (pp. 72-76, 85-94) with Butner’s concession regarding ERAS and Arianism. ERAS only mixes Christ’s natures if Person-only relations—submission and generation—characterize his divinity, which Butner’s concession denies. Also, Butner’s representation of ERAS seems off at times. He presents Ovey as denying that Christ submitted in his humanity (pp. 87-93). However, ERAS proponents argue that Christ submitted both in his humanity and by his eternally subsisting relation but not by his divine nature. The real Son—alone—truly took on flesh.

Third, SLO requires a false choice: either the Father commanded the Son’s incarnation or the Son offered himself freely. However, both Athanasius (Against the Heathen, 3.46.5-6; Discourses against the Arians, 2.18.31) and Augustine (On the Trinity, 2.5.9) referred to the Father’s giving libertarian-free commands to the Son. Yet the eternal Son is identical to these commands (as their exemplar). The Father’s libertarian freedom is the Son’s libertarian freedom. But the Son is not libertarian-free in his generating from or working from the Father.

Fourth, Butner’s claims are off-base regarding pro-Nicene “will” language. Butner holds up Lewis Ayres as a standard authority on pro-Nicene doctrine (pp. 28-32). However, Ayres has justified using three-will and one-will language: “The Son’s love for the Father is one of endless conformity in will . . . what we may also describe as the endless exercise of his own will” (“‘As We are One’: Thinking into the Mystery,” Advancing Trinitarian Theology: Explorations in Constructive Dogmatics. The Los Angeles Theology Conference, ed. Oliver Crisp and Fred Sanders, [Zondervan: Grand Rapids, 2014], 94-113; 108-109, emphasis original). The pro-Nicene position coheres with Person-only relative wills and one natural will. Ayres critically dampens Butner’s key claim that three-will language contradicts pro-Nicene Trinitarianism.

Fifth, SLO’s exegetical claims regarding the Father’s sending the Son are weak. SLO argues that the Father’s sending does not imply authority. SLO reasons that the Son might be more like a written letter, which cannot be described as obeying (p. 180). But the question is not of univocal obedience but of analogical authority. Intentionally or not, SLO here seems to reflect the post-Modern milieu: authors lack authority over their message and meaning.

SLO examines ERAS with a multi-faceted theological approach. It recognizes that Trinitarianism must fit with all theology, especially Christology and soteriology. Butner has written the book as a polemical appeal to ERAS theologians. Students should come to the book with an intermediate to advanced understanding of Trinitarian doctrine. Students who read SLO will especially learn the complex history of doctrinal subtleties regarding Christ’s natures and wills. Students should take note of the different charitable renderings and concessions Butner makes to ERAS as well as how he responds. Students should also internalize Butner’s case that the Trinitarian mission is identical to the Person’s processions but with a created term. 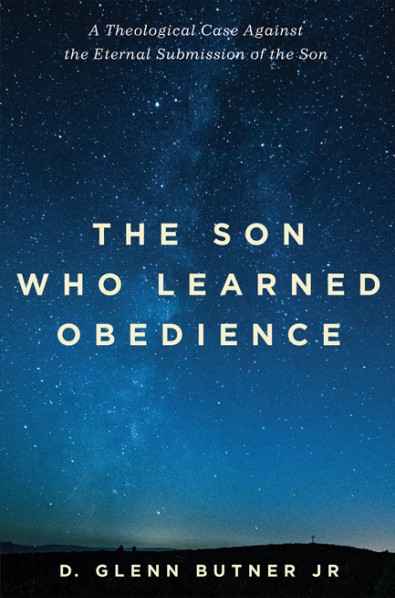