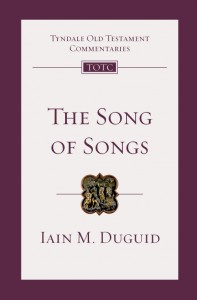 Iain Duguid (PhD, University of Cambridge) is professor of religion and Old Testament at Grove City College in Pennsylvania. Duguid has written several works including Hero of Heroes: Seeing Christ in the Beatitudes (P&R Publishing, 2001) and Ezekiel and the Leaders of Israel (Brill, 1994). He has also contributed volumes to several commentary series including the Reformed Expository Commentary (Daniel, Esther & Ruth), the NIV Application Commentary (Ezekiel), and Preaching the Word (Numbers). Song of Songs is a work that will benefit both student and pastor in their study of Solomon’s love poem.

Duguid wrote Song of Songs based on “a conviction that it [Song of Songs] was not generally being preached adequately (or at all) in the evangelical or Reformed circles in which I move” (p. 9). The book sets out to provide a comprehensive commentary on the text to alleviate this perceived shortcoming. This is accomplished methodically by examining questions of authorship and date, themes and structures, and concluding with an analysis of the text itself.

Duguid’s work shines in two areas. First, his sensitivity to the hermeneutical issues and tendencies at play is excellent. Duguid surveys various attempts to categorize and classify the Song. These interpretations include: love song, allegory, natural, typological, and more. In this he rightly worries that “the desire for relevant application of the biblical text can make allegorists of us all” (p. 31).  He contends, however, that it is just as problematic for a text to exist without connection to the present. Therefore, he rightly argues for a balanced approach in understanding the text. Duguid sees the Song as it is most naturally presented, that is, as a work of wisdom from the ancient Near East speaking about marriage. This foundation is augmented by a realization that a study of human relations can have theological implications. “To put it in more explicit biblical terms, our broken human relationships tell us something about our broken relationship with God” (p. 38). Duguid’s interpretative lens is impressive as it allows him to remain grounded in the history and culture of the text while remaining sensitive to the metanarrative themes of Scripture itself. It is clear that Duguid seeks to be as faithful as he can to the original intent of the book.

The second excellent feature of the book is in its relevance to the modern reader. With Western, especially American, culture’s preoccupation with sex and eroticism, Duguid makes a point of showing a biblical counterbalance in viewing sex. He helpfully points out that the Song does highly praise sex and views it as a beautiful gift of God, but also notes that the author of the Song doesn’t go out of his way to be crass (p. 95). Sex is more than a biological action biblically, it is an event in which the whole person becomes ‘one’, in the Genesis sense, with their partner. Students and pastors alike will find great practical application in Duguid’s words on this matter.

The only critique I would venture for Duguid’s work is that he too lightly engages the history of ancient Near East and its relevance in interpretation. As noted earlier, Duguid believes the work to primarily be interpreted as a piece of wisdom literature of the ancient world. As such, the Song exists in a genre that contains other examples from neighboring cultures. This is mentioned in passing for example when Duguid speaks of Egyptian love literature (p. 95). Rarely though does he engage the metaphors, images, and symbols that would be part of the genre of love literature. This omission may be due to the pastoral focus of the work, or perhaps a concern that such inclusions would push the required knowledge on the reader’s part beyond a basic level. In either case the shortcoming remains. There does seem to be a missed opportunity to both advance scholarship and enrich readers in this area.

Throughout Song of Songs the reader is pushed to know, meditate upon, and apply biblical wisdom in regards to marriage. Duguid has written an excellent commentary that calls one to draw closer to God. This work is a welcome addition for students seeking to get an introductory view of the Song of Songs, and it will be an excellent addition to any pastor’s library. In light of rising rates of divorce and a generally cavalier attitude towards sex permeating our churches, Duguid brings godly truth and offers practical applications from the Bible that can mend the broken hearted.

The Tyndale Old Testament Commentary series seeks to help readers understand the Bible as Scripture and to be able to approach it without being lost in the technical debates of academia. On that count Duguid’s work is a resounding success. Students should not rely though on this as their only source for more academically focused work. Those that would wish a more serious lexical approach should consider turning to Longman’s Song of Songs (Eerdmans, 2001) or Garrett’s Song of Songs, Lamentations (Nelson, 2004). For more historic and cultural insight into the Song, students should consider Othmar Keel’s The Song of Songs: A Continental Commentary (Fortress, 1997).