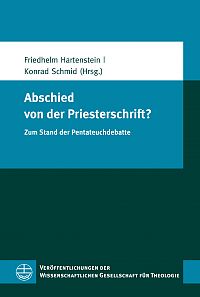 The collapse of the Documentary Hypothesis beginning in the 1970s left many of the traditional results of critical Pentateuchal research in its wake. Despite the renunciation of the existence of the Yahwist and Elohist sources by Rolf Rendtorff and others, the Priestly Writing (P) has survived largely unscathed, although its characterization as a source is no longer taken for granted. A litany of questions now revolves around the nature of P as a source or redactional layer as well as P’s extent and internal stratification. A group of continental scholars gathered to address these and related issues in the Old Testament section of the Wissenschaftlichen Gesellschaft für Theologie in May 2012 at Stuttgart-Hohenheim.

Christoph Levin surveys the history of research on the nature of P and its composition, particularly within the framework of documentary, fragmentary, and supplementary models. Levin finds persuasive the arguments in favor of P’s literary independence and attributes the emergence of a separate Priestly history parallel to the Yahwistic/non-P history to the uniqueness of the Priestly worldview, particularly regarding the revelation of God’s name and offering sacrifices. For Erhard Blum, the patriarchal traditions of Genesis reveal a varied profile of the Priestly texts. Narrative gaps and the presupposing of pre-P traditions and literary contexts suggest that P is a redaction, but coherent narrative threads provide evidence for an originally independent source. To account for both types of evidence, Blum proposes a multi-staged process for P’s composition: Priestly tradents composed drafts of P that aimed toward combination with the non-P traditions from the outset. At a secondary stage, the Priestly tradents combined their P drafts with the non-P materials. In this way, the Priestly tradents function as both the authors and redactors of P. Jan Christian Gertz’s examination of Gen 5 argues that the Priestly texts in Gen 1–11 originally constituted an independent source. Gertz counters several common arguments that suggest P is a redactional layer with traditional literary-critical observations. Most uniquely, Gertz proposes that SamP Gen 5, which he considers older than the MT and LXX versions, forms a non-narrative introduction to P’s Flood story and prepares the way for the statement of worldwide corruption in 6:11–13. The first five individuals listed in the genealogy establish a life expectancy of around 900 years. The second five individuals, excluding Enoch and Noah due to their close relationships with God, suggest an inverse relationship: increased worldwide sin results in a decrease in length of life. Christoph Berner considers the Priestly texts in Exod 1–14 a redactional supplement to the pre-P texts, but the overall redactional history of the Exodus narratives is significantly more complicated. Berner detects four major editorial layers: (1) a pre-P layer that is much smaller than traditionally assumed; (2) a Priestly expansion of the pre-P texts (=P1, which is basically the same as the traditional Priestly Grundschrift [Pg] or “basic layer”); (3) substantial post-P additions that are part of a broader late-Deuteronomistic Hexateuchal redaction; and (4) a secondary Priestly layer (=P2) that corresponds to Reinhard Achenbach’s “theocratic revision” in the book of Numbers. Thomas Römer considers the same texts as Berner, but arrives at different results. The P texts in Exod 6; 7–9; and 14 originally constituted a continuous and independent narrative thread. Doublets (e.g., Exod 3//Exod 6) provide the most persuasive evidence for originally independent sources, since supplementary models expect a Priestly redaction of pre-P traditions to produce a less fractured narrative. Römer recognizes the absence of an introduction for Moses in P, which is problematic for source models but finds it more compelling to believe that the Priestly tradents assumed familiarity with the Moses traditions or that parts of the Priestly thread were omitted when they were worked into the Pentateuchal narrative than it is to believe that supplementary models would produce doublets.  Eckart Otto investigates the relationship between post-exilic Fortschreibungen in Leviticus and Deuteronomy. Although Lev 17–26 receives and adapts the Deuteronomic Code, Deut 11:13-17 evinces reception of Lev 26. Deut 11:13-17 contains lexemes otherwise unique to Lev 26 and raises questions about circumcision of the heart that only find their answer in Deut 11. Also, whereas Yhwh speaks in first person in Lev 26, Moses takes on Yhwh’s words in first person in Deut 11:13-15 rather than in a third person report of Yhwh’s speech. Despite the grammatical awkwardness, Moses’s adoption of the first person speech is purposeful: it betrays dependence upon Lev 26 and functions as a bridge to Deut 28 by highlighting Moses’s role as prophetic interpreter of Torah. Christophe Nihan explores Pentateuchal models of composition and stratification through the lens of Lev 26. He concludes that Lev 26’s concept of covenant presupposes the integration of P and non-P materials in Genesis and Exodus. The author who inserted Lev 17–26 into its present location has a much more limited role than previously thought. He is not the redactor of the entire Pentateuch or associated with a Holiness School. Instead, this author’s work coincides with the emergence and redaction of Leviticus as an individual book (scroll). By the time of the insertion of Lev 27, a major break between the scrolls of Leviticus and Numbers had been firmly established.

The present volume’s title bears obvious formal similarities to the 2002 collection of essays entitled Abschied vom Jahwist (and the English edition Farewell to the Yahwist?, SBL, 2006), but the contributors do not bid adieu to the Priestly Writing in the same way that scholars have increasingly rejected the traditional conception of a Yahwist. They maintain that the Priestly Writing (along with Deuteronomy) still comprises the cornerstone of critical research, but the proliferation of models to explain the literary character of the Priestly texts highlights many exegetical disagreements. The contributors’ work represents the triumph of tradition-historical criticism at least in the sense that the literary character of P must be evaluated in a sort of piecemeal fashion. So for instance, the source character of Gen 1–11 cannot be extrapolated and applied to the ancestral traditions. Each block of tradition must first be evaluated on its own, and only after all the relevant texts have been examined can a broader synthesis be pursued. All contributors incorporate a range of critical methodologies in their studies, but redaction criticism is generally given pride of place. The essays by Gertz and Otto highlight the increasing importance of text-critical studies for literary criticism. Nihan’s association of Lev 26 with the redaction of the book of Leviticus is provocative and potentially raises similar questions about the redaction of Genesis and Exodus as books, although Leviticus may be uniquely situated for such questions due to its thoroughly Priestly character.

For (especially non-German-speaking) students of biblical studies, Abschied von der Priesterschrift? contributes much more than simply a look at present continental studies of the Priestly strata of the Pentateuch. Levin’s concise but thorough review of research is a useful entry point into current scholarship on P. Because the articles by Berner and Römer analyze the same texts, they serve as a particularly helpful way to compare how different scholars prioritize different types of evidence and methodological approaches in order to arrive at workable results. Without prior introduction to critical studies of the Pentateuch, the various labels for different Priestly strata (the more traditional Pg, Ps, H; Blum’s KP; Berner’s P1, P2; etc.) might be confusing. Introductions to Pentateuchal studies like those by Jean-Louis Ska (Introduction to Reading the Pentateuch, Eisenbrauns, 2006) and Joseph Blenkinsopp (The Pentateuch, Yale University Press, 2000) will be particularly helpful for filling such introductory gaps.