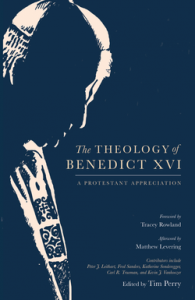 Tim Perry, adjunct professor of theology at St Paul University (Ottawa) and Trinity School for Ministry (Ambridge), is editor of this wide-ranging volume on the theology of Benedict XVI. Leading Catholic theologian, Matt Levering, describes the publication as being in ‘the top handful’ (p.282) of studies on Ratzinger’s thought and this judgment rings true given the calibre of the various essays. The fifteen contributors span a range of denominations (e.g. Southern Baptist, Anglican, OPC, and Lutheran) and in their trawl of Joseph Ratzinger’s voluminous writings manage to cover virtually every aspect of contemporary theology. Trinitarian thought, Christology, revelation, tradition, theological method, hermeneutics, the relationship between faith and reason, theological anthropology, prayer, catechesis, Mariology, ecclesiology, priesthood, the theological virtues and liturgy all come into play in this evangelical homage to one of Catholicism’s finest living theologians.

Benedict XVI emerges from this study as an outstanding theologian of culture whose trenchant critique of current societal and theological trends will both enrich and challenge  those standing on the other side of the Tiber. This image of Benedict is exemplified in Ben Myers’ opening essay. Here he makes a convincing case that evangelicalism has much to gain from Ratzinger’s synthesis of faith and reason, particularly as it engages with postmodernity’s rejection of any overarching or shared rationality.  Katherine Sonderegger’s chapter on ‘Writing Theology in a Secular Age’ is one of the gems of this publication, not least for her incisive portrayal of Ratzinger as a theologian who tells the unvarnished truth about a world estranged from God.  This unflinching portrayal of reality on Ratzinger’s part she characterises as ‘a gift above all’ (p. 30). Her robust synopsis of Ratzinger’s critique of modern trends opens a window on his unequivocal opposition to secularism: ‘Secularism cannot be a form of realism – his claim is that strong. What is necessary for the human subject, for the life and flourishing of the human person, is that this shell of atomized rights and liberties must be shattered, killed, so that a larger, ‘new subject’ can be born who has God as its ground, Christ as its inner subjectivity.’ (p.38)

Kevin Vanhoozer’s chapter on Revelation, Tradition and Biblical Interpretation presents Ratzinger as seeking to follow the same via media as evangelicals between fundamentalism and modernist Christianity, or in Benedict’s context, neoscholasticism and modernist biblical criticism. His major emphasis is on the way Benedict has challenged biblical scholarship to take seriously what has been termed the ‘theological interpretation of Scripture’, and not merely to focus on the historical critical dimension of the text. In terms of the championing of this cause, Vanhoozer believes evangelicals may have something to learn from the former Pope (p. 67). R. Lucas Stamps’ excellent chapter on anthropology highlights how Benedict’s Augustinian theology (sober and realistic in its account of humanity) can help the church navigate the difficult waters of late modernity. A proper vision of humanity’s vocation as creature of God, and an understanding of sin as that ‘which distorts our freedom and pulls us away from God and our own good’ (p. 97) emerge as ways out of the various blind alleys now opening up within the culture.

Christopher J. Holmes’ intriguing chapter on Christology serves to highlight a defining  component of Ratzinger’s ministry as a theologian. For the Pope Emeritus, the great truths of the faith (not least Christology) are comprehended in the context of prayer, or not at all. As Holmes puts it, drawing at points on a famous Ratzinger text, ‘Without prayer we cannot progress in theological understanding. Prayer evokes an “eye of love” and “encourages the faculty of beholding.” Without love, we can neither behold Jesus Christ nor receive him.’ (p. 110). This ‘hermeneutic of faith’ was to inform profoundly Ratzinger’s great Christological trilogy, Jesus of Nazareth. Perhaps what will be the most surprising chapter for evangelicals is Tim Perry’s exploration of Ratzinger’s Mariology. Here he acquaints his readers with Ratzinger’s defence of Mariology, which is derived from prophetic and typological readings of the Old Testament. Once we factor these in to our engagement with the few NT Marian texts that we have, the Catholic view that Mary is typologically present in the Bible is thought to make some sense. (p. 134). While remaining a convinced Protestant, Perry’s goal is to challenge his fellow evangelicals to engage with the typological basis of Mariology and take the Catholic approach seriously. Another key chapter is Fred Sanders’ work on Ratzinger’s Trinitarian theology. While acknowledging that the latter has not written extensively on the theme, he draws out key emphases in Ratzinger’s work which speak to current deficiencies within systematic theology. Most strikingly, Ratzinger is opposed to a reductionist Trinitarianism (à la Küng) which focuses on the economic Trinity but effectively dismisses the immanent one. Sanders demonstrates how for Ratzinger the Trinity is essential for our knowledge of God and our certainty of being loved. Without a Triune God who is love in himself, we can have no certainty that God is love (p. 145).

Carl Trueman’s chapter on ecumenism is the least effusive in its praise of Ratzinger and the most wary of Protestant adulation of the retired Pope. His suspicion is that some have lost sight of the fundamental differences between the two traditions and in the process neglected Protestant distinctives. Ratzinger, on the other hand, has remained committed to the ecclesiology of his own church, note the tone of Dominus Iesus and the decision to create an  Ordinariate. Trueman claims that perhaps Benedict’s most valuable lesson to Protestants is on how to be faithful to one’s own convictions (p.167). However, the absence of engagement with Ratzinger’s most significant publication on ecumenism (‘Luther and the Unity of the Churches’) or awareness of his crucial behind-the-scenes support of the Joint Declaration on Justification, raises questions about whether we have been given the whole picture as regards  Benedict’s attitude to ecumenism. Peter Leithart’s complex chapter on the Bible and Liturgy explores two fascinating themes in Benedict – church music and the essential nature of the eucharist. This essay marks one of the few points of disagreement between Ratzinger and his Protestant interlocutors. Leithart argues that Benedict is willing to acknowledge that patristic thought veered away from the apostolic trajectory by downplaying the theological significance of music in worship. However, with another vital movement away from the apostolic pattern (the eucharist ceasing to be a communal meal and taking on the function of a sacrifice), Ratzinger seems to have conceded very little. Leithart suggests that he should perhaps be more open to acknowledging other points (e.g. food) where the post apostolic church has not kept in step with the scriptural trajectory. The final chapter considered is Bishop Joey Royal’s reflection on Ratzinger’s Eucharistic theology. In a brave move, especially given American evangelicalism’s strong Zwinglian orientation, Royal suggests that Ratzinger’s careful explanation of Eucharistic sacrifice and transubstantiation could allay many Protestant misunderstandings about these contentious ideas and potentially overcome barriers still existing between Catholics and Protestants who already believe in the real presence (p. 217).

As I hope the content of this review indicates, the theology of Benedict XVI has much to offer Protestantism. This publication makes it accessible to a new audience who will benefit from Benedict’s incisive engagement with contemporary culture, his intelligent articulation of orthodoxy and most-tellingly, his Christocentric spirituality. 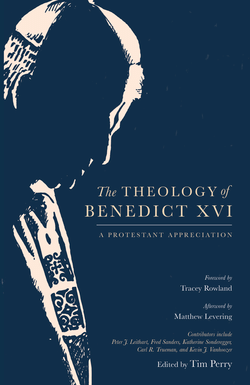